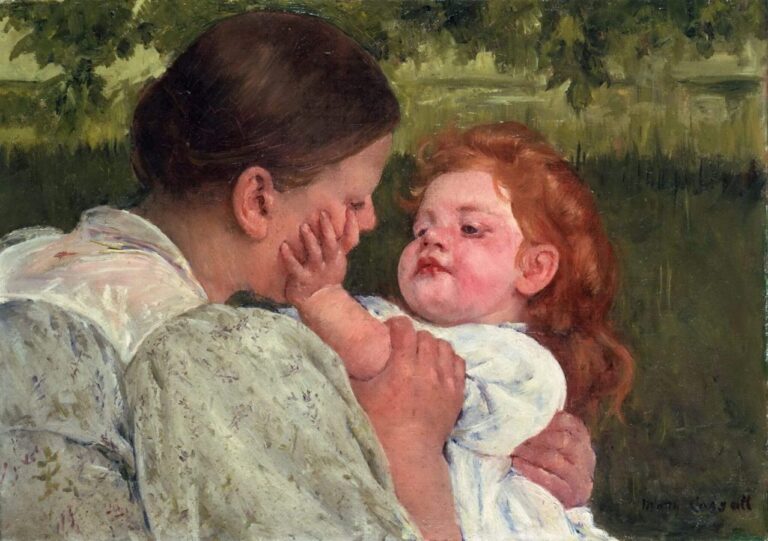 Cute Babies in Art: From Rubens to Cassatt

Painting of the Week: Mary Cassatt, Little Girl in a Blue Armchair

Mary Cassatt was an American painter and printmaker who developed her skills by studying, working, and living in France. She was one of only three women Impressionist painters, and the only American to fully integrate into Impressionism. Despite her success on both continents and a huge impact on the art scene in America, today her name isn’t so common in France and Europe.

Mary Stevenson Cassatt was born on 22nd May 1844, in Allegheny City, Pennsylvania. She was born into a very wealthy family. Her father, Robert, was a successful stockbroker and land speculator, and her mother, Katherine, came from a banking family. Cassatt was one of seven children. Because of the treatment of one of her brothers, Cassatt spent five years of her childhood in Europe.

During that time she visited many of the European capitals and received her first drawing and music lessons. She also learned German and French which will be very useful in her later life. Her first exposure to French artists Jean-Auguste-Dominique Ingres, Eugene Delacroix, Camille Corot, and Gustave Courbet was likely at the Paris World’s Fair in 1855. Also, Edgar Degas and Camille Pissarro were exhibiting there.

From childhood, Mary Cassatt showed interest in painting. Cassatt’s family disagreed with her wish to become a professional artist. Despite that, she began studying painting at the Pennsylvania Academy of the Fine Arts in Philadelphia at the age of fifteen. At that time women were studying painting because that was a nice skill for a woman to have. Cassatt, instead, was determined to become a professional artist.

Therefore, in 1866 Cassatt moved to Paris. There she applied to study privately with masters from the Ecole des Beaux-Arts (women could not study there yet). She was accepted to study with Jean-Léon Gérôme. Cassatt drilled her artistic skills with daily copying in the Louvre (she obtained the required permit). The museum was also a social meeting place for Frenchmen and American female students who were not allowed to visit cafes where the avant-garde socialized.

In 1868 the selection jury accepted her work A Mandoline Player for the Paris Salon. The work is in the romantic style and is one of only two paintings from the first decade of her career that can be documented today.

With the outbroke of the Franco-Prussian War, Cassatt returned to the United States in 1870. However, her father continued refusing to pay for her art supplies. She tried to make an independent living by exhibiting her works, but was unsuccessful. She also had problems with a lack of paintings to study while staying there. Due to these obstacles, Cassatt considered giving up art.

Shortly afterward, her work attracted the attention of the Archbishop of Pittsburgh. Therefore, he commissioned her to paint two copies of paintings by Antonio da Correggio in Parma, Italy, providing her with enough money to cover her travel expenses and part of her stay.

Few months after returning to Europe, Cassatt’s perspective brightened. Her painting Two Women Throwing Flowers During Carnival was well received in the 1872 Salon and was purchased. After completing her commission for the archbishop, Cassatt traveled to Madrid and Seville to paint. In 1874, she settled down in France with her sister Lydia.

The French art scene was in a process of change. Radical artists were rejecting the accepted academic tradition. The Impressionists were forming their movement. Mary Cassatt was continuing to work in the traditional manner. She was submitting works to the Salon for over ten years, with increasing frustration, before joining the Impressionists.

Joining Degas and The Impressionists

Cassatt continued to express criticism of the politics and prevailing conventional taste of the Salon. Also, the neglect of female work was bothering her. She realized that only artists that had friends or protector in the jury were getting accepted. In 1877, both her entries were rejected, and for the first time in seven years, she had no works in the Salon. Finally, Edgar Degas invited her to show her works with the Impressionists.

Mary Cassatt accepted Degas’ invitation with enthusiasm. She felt comfortable with the Impressionists, often meeting with them privately and at exhibitions. She also hoped for bigger commercial success selling paintings to the sophisticated Parisians who preferred the avant-garde.

“At last, I could work with total independence, without worrying about the opinion of a jury. I started living.”

Edgar Degas had a huge influence on Mary Cassatt. They would work side-by-side and she gained quite from his knowledge. She became proficient in using pastels and Degas also introduced her to copper engraving. Previously a studio-bound artist, she started carrying a sketchbook with her to record the scenes she saw outdoor. Cassatt had strong feelings for Degas but learned not to expect too much from him.

Cassatt’s parents joined her in Paris in 1877. Cassatt and her sister valued their company as none of them had married. Cassatt decided early in life that marriage wouldn’t be compatible with her career. Lydia, who was often sitting for her sister, suffered from recurrent bouts of illness. She died in 1882 and left Cassatt temporarily unable to work.

Cassatt’s father still didn’t want to pay for her studio and art supplies. Therefore, afraid of having to paint “potboilers,” she started working on quality paintings for the next Impressionist exhibition. Three of her most accomplished works from 1878 were Portrait of the Artist (self-portrait), Little Girl in a Blue Armchair, and Reading Le Figaro (portrait of her mother).

Cassatt’s Influence on the USA

In 1886, Cassatt provided two paintings for the first Impressionist exhibition in the United States, organized by art dealer Paul Durand-Ruel. She also served as an advisor to several major art collectors and stipulated that they eventually donate their purchases to American art museums. For example, her friend Louisine Elder, who married Harry Havemeyer, was collecting the Impressionists under Cassatt’s advisory. Much of her vast collection is now in the Metropolitan Museum of Art in the New York City.

Cassatt also became a role model for young American artists. Among them was Lucy A. Bacon, whom she introduced to Camille Pissarro. Even though the Impressionist group disbanded, Cassatt still had contact with some of the members, including Auguste Renoir, Claude Monet, and Pissarro.

Cassatt’s style evolved, and she moved away from Impressionism to a simpler, more straightforward approach. She began to exhibit her works in New York galleries. After 1886, Cassatt no longer identified herself with any art movement and experimented with a variety of techniques.

Mary Cassatt’s signature subjects were portraits of women and portrayals of mothers and children caught in everyday moments. She painted with bright color, solid and precise drawing. The portraits are filled with tenderness but are somehow unsentimental. Some of these works depict her own friends. Later, she generally used professional models in compositions that often resemble Italian Renaissance depictions of the Madonna and Child.

In 1891, Mary Cassatt exhibited a series of highly original colored drypoint and aquatint prints. She was inspired by the Japanese masters shown in Paris the year before. Cassatt liked the simplicity and clarity of Japanese design. In her interpretation, she used primarily light, delicate pastel colors and avoided black.

“I don’t believe a woman could draw that well. Did you really do this?”

Mary Cassatt’s brother, Alexander Cassatt, (president of the Pennsylvania Railroad) died in 1906. It shook her greatly. However, she continued to produce artworks. An increasing sentimentality appeared in her work of the 1900s. Her work was popular with the public and the critics, but she was no longer breaking new ground. Cassatt was hostile to new developments in art like post-Impressionism, Fauvism, and Cubism.

Cassatt was impressed by Egyptian art while on a trip in 1910, but it also caused a creativity crisis. Diagnosed with diabetes, rheumatism, neuralgia, and cataracts in 1911, she did not slow down. However, after 1914 she was forced to stop painting as she became almost blind. Despite this, she took up the cause of women’s suffrage, and in 1915, she showed eighteen works in an exhibition supporting the movement.

In recognition of her contributions to the arts, France awarded her the Legion d’honneur in 1904.

On June 14, 1926, she died at Chateau de Beaufresne, near Paris, and was buried in the family tomb at Mesnil-Theribus, France.

“I have touched with a sense of art some people – they felt the love and the life. Can you offer me anything to compare to that joy for an artist?”