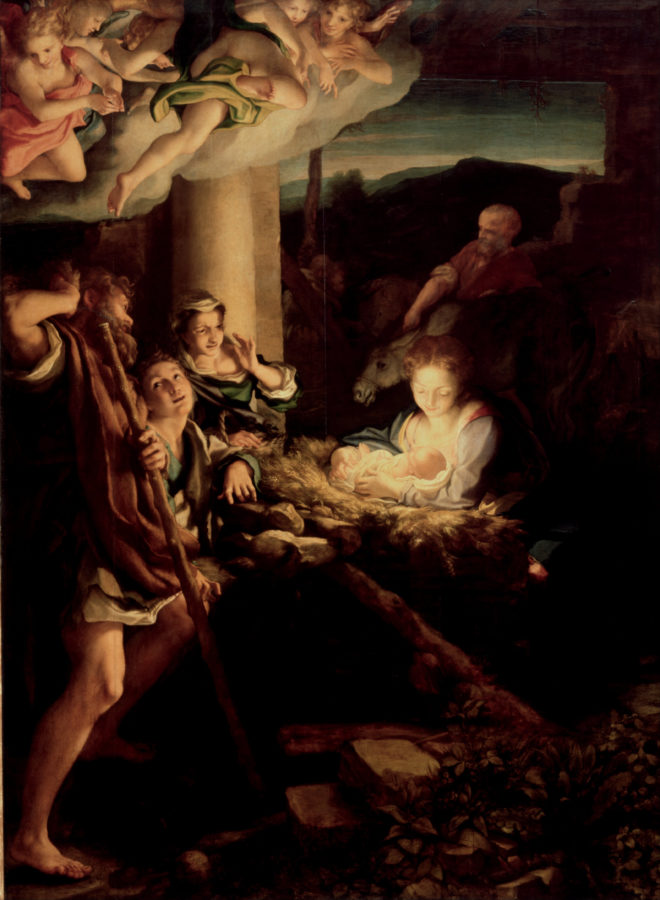 The Holy Night by Correggio also known as Nativity or the Adoration of the Shepherds, was commissioned by Alberto Pratoneri for his family chapel in the church of St. Prosper of Reggio Emilia, in 1522. It has been described as the first monumental nocturnal scene in European painting.

Correggio did not finish the work until the end of the decade, and it was placed in the church in 1530. The painting was moved to Modena, Italy in 1640, and it is now housed in the Old Master’s Picture Gallery in Dresden, Germany. It was purchased by August III in 1746 together with the hundred masterworks from the d’Este collection in Modena. For many decades it remained the most well known painting in the Dresden collection, until around 1800 when Raphael’s Sistine Madonna lastingly surpassed it.

The artist, following Titian, interpreted a scene that is fully ‘à la chandell’ (“of the candle”) and produced an outstanding result in the Chiaroscuro treatment of light. The scene pivots around the Child, surrounded by Mary’s arms, with a group of shepherds on the left. On the right are the traditional presepe animals and St. Joseph. A group of several angels hide in the clouds above, witnessing the scene.

This work because of luministic effects was used as a model by such painters as Camillo Procaccini, Luca Cambiasi, Guido Reni and Domenichino, and even later on, by Barocci and Maratta.