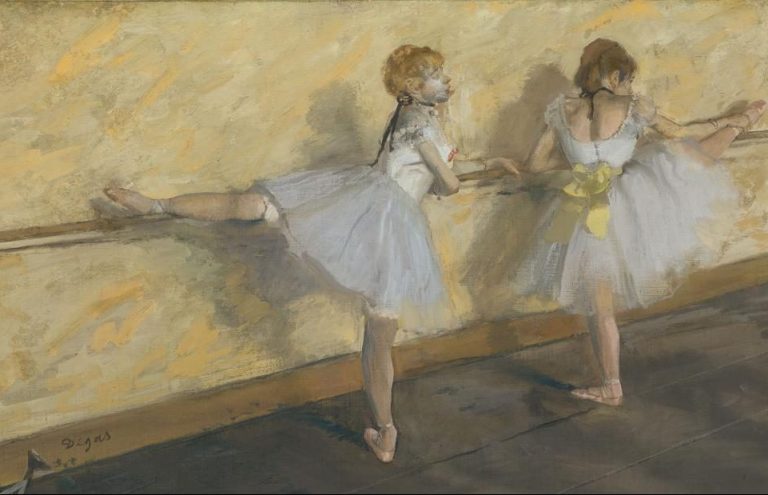 Edgar Degas was one of the founders of Impressionism, however, he didn’t like the term and preferred to call it “Realist” or “Independent”. Ballet dancers were one of his main subjects. “People call me the painter of dancing girls,” Degas once told Parisian art dealer Ambroise Vollard. “It has never occurred to them that my chief interest in dancers lies in rendering movement and painting pretty clothes.” Here are eight of the most beautiful Degas ballerinas that he is so famous for.

This is the first of Degas‘ ballerinas scenes. The dancer in the center is Joséphine Gaujelin, who later became an actress at the Gymnase, a theater known for its comedies and popular dramas. Gaujelin posed in a dance costume for a number of drawings when Degas worked on his first ballet pictures. Why ballet subjects? Among other reasons, they were easier to sell, and Degas needed money.

2. Musicians in the Orchestra

Degas painted the Orchestra Musicians in 1872 and revised it a few years later, enlarging it and turning the horizontal format into a vertical one. He also painted over parts of the initial composition.

3. The Foyer of the Opera at Rue Le Peletier

The Foyer of the Opera at Rue Le Peletier shows 10 Degas ballerinas being examined in a great hall. The white-clad Louis François Mérante, an instructor at the opera house, is giving orders, which the dancers have to follow. Opera at Rue Le Peletier is an old opera house that burned down in 1873, though Degas never really liked Charles Garnier’s replacement building, which opened in 1875. By far the largest opera house in the world at that time, this magnificent monstrosity employed 7,000 people, including a corps de ballet of 200.

4. Rehearsal of a Ballet on Stage

The style of this painting resembles an en grisaille work. Interestingly, the non-colorful chiaroscuro is an allusion to the new visual technique of photography. Here Degas chose a viewpoint slightly from above, to one side, with the focus on the stage bordered by the footlights. This painting was immediately noticed at the first Impressionist exhibition in 1874. For example, the painter Giuseppe De Nittis wrote to a friend:

I remember a drawing that must have been of a dance rehearsal […] and I can tell you it was extremely beautiful: the muslin costumes were so diaphanous, and the movements so true to life that it has to be seen to be believed; it is just impossible to describe.

This painting shows the star of the show, dancing solo on an empty stage. On the left we can see a shadow, hiding behind the curtain. This is the young dancer’s patron. Getting behind the scenes wasn’t easy. It was a privilege paid for by wealthy male subscription holders, who often flirted with the dancers and laid siege to their dressing rooms. In an 1882 letter to a friend Degas wrote:

My dear Hecht, have you the power to get the Opéra to give me a pass for the day of the dance examination, which, so I have been told, is to be on Thursday? I have done so many of these dance examinations without having seen them that I am a little ashamed of it.

6. The Pink Dancers, Before the Ballet

Around 1880, Degas changed his palette from grays to brilliant colors, ranging from red to russet. Furthermore, this came with a change of style and technique, in which pastels became his dominant medium. Additionally, he expanded the possibilities offered by pastels by combining them with gouache, watercolor, oils mixed freely with turpentine, and even monotypes.

The drawings of Degas ballerinas that he made backstage were few compared with the number he produced in his studio, where he paid a small amount of money to ballerinas to pose. Fun fact: The police morals unit once visited Degas’s studio, wanting to know why so many little girls were coming and going. However, the fact that ballerinas often were prostitutes is a different story.

In his mid-40s, Degas, who had always suffered from poor eyesight and would ultimately go blind, started to make wax figures, partly for his own pleasure, partly to have something he could mold and feel and not just visualize. As a result, at the 6th Impressionist exhibition in the spring of 1881, he presented the only sculpture that he would ever exhibit in public.

The Little Dancer Aged Fourteen was not so warmly received when she first appeared. As a nearly life-size wax figure with real hair and dressed in a cloth tutu, it provoked a strong reaction from critics who denounced the dancer as ugly. Marie van Goethem, the model for the figure, was the daughter of a Belgian tailor and a laundress. These dancers were known as “petits rats de l’opéra,” literally “opera rats”, presumably because of their scurrying around the opera stage in tiny, fast-moving steps. But the derogatory association of the name with dirt and poverty was also intentional. Young, pretty, and poor, the ballet students also were potential targets of male “protectors.”