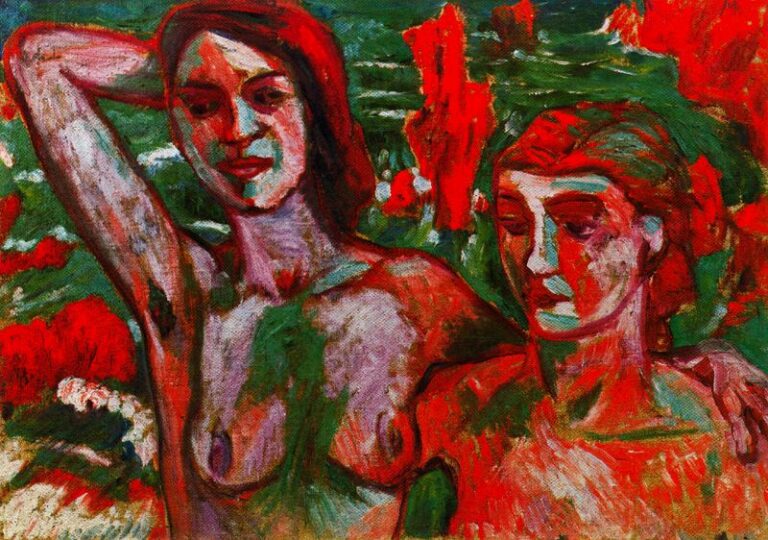 Today I’ll show you an avant-garde love story, not because it’s very different from all other ones, but because it involves two avant-garde artists from Russia at the dawn of the 20th century. Time for Natalia Goncharova and Mikhail Larionov’s romance!

Those who believe in numerology would say that the fate of these two was written in the numbers from the start: Mikhail was born on the 3rd of June, Natalia a month later, on the 3rd of July of 1881. Just a month apart, they arrived at the School of Painting, Sculpture, and Architecture in the same year, as both the families had moved to Moscow the same year. (There are no coincidences in life, one could say.) Although Natalia enrolled in a sculpture course, Mikail chose painting (he studied under the painter Konstantin Korovin), soon they met and fell for each other. Larionov was not the best student, he often skipped classes and was defiant of school rules, while Natalia was a dedicated student who, after three years, resigned from her ten-year-long course convinced by her boyfriend who saw a painter in her, not a sculptor.

Natalia was mad at Mikhail for three days after he said that she was too preoccupied with form and that she should open her eyes to the world. But when he came to her and found a room filled with paintings and drawings, he knew she had talent. Natalia admitted later that:

Suddenly, I understood that something I wanted in sculpture was, actually, to be found in painting… and it was painting.

The lovers didn’t care about the conventions of their era: they moved in together although they weren’t married, which upset Natalia’s parents who first didn’t accept poor Mikhail but later they changed their mind when the Tretyakov Gallery bought his first painting. The couple was allowed to move into an apartment owned by Natalia’s parents where they lived until 1915, living a scandalous lifestyle: they founded avant-garde groups (such as Jack of Diamonds), walked topless in the wealthy streets of Moscow (Natalia), was kicked out from school (Mikhail), had a trial on alleged pornography in nude life studies in one of the exhibitions (Natalia), tattoed himself and other people (Mikhail).

When Jack of Diamond’s exhibition became a huge scandal for the avant-garde nature of the works exhibited, the couple didn’t stop pushing the boundaries of bourgeoisie taste dominating Moscow. In 1912 Mikhail invented a new trend in painting, Rayonism, which was a style representing the physical world by means of color and light. Proud Natalia said of him:

Larionov is my conscience in work, my tuning-fork. My touchstone for whether I do false. We are very different, and he sees me from inside of me, not of him. Like I see him.

They published the Rayonist manifesto in 1913, signed by 9 other artists. Although Mikhail was the official inventor of it, it was Natalia who became its most active practitioner considered by her contemporaries “the artist with the richest paints.” Their art laid the foundations for abstraction in Russia and the couple quickly became famous. They did various commissions: illustrations for books, patterns for textiles, women’s clothes, and wallpapers. Moreover, prior to World War I, they participated in decorating the cabaret Pink Lantern and featured in the first futuristic film Drama in the Futurist Cabaret No. 13 made in Russia, directed by Vladimir Kasyanov.

When in 1914 the war broke out, Mikhail was drafted. He was heavily wounded and had to be hospitalized for months. In the meantime, Michel Fokine, Sergei Diaghilev, and Alexandre Benois came to Moscow intrigued by Goncharova and Larionov’s art. Then, Benois offered Natalia a position as a stage designer for Diaghilev’s ballet The Golden Cockerel. In 1915 the couple officially left Natalia’s parents flat and moved to Switzerland and then France, where they made a fantastic career in stage and costume design working for Diaghilev and other troupes, while Mikhail even choreographed the dances.

Surprisingly, the two found new life partners when in Paris: Natalia got together with a family friend Orest Ivanovich Rosenfeld, editor-in-chief of the newspaper Populaire, and Mikhail with his secretary and model Alexandra (Sashenka) Tomilina (she even moved into the same block of flats and rented the apartment below). This was apparently in order to facilitate Larionov’s work, who would spend days at Tomilina’s, but returned home for the night. Both artists accepted their new unions, they still worked together and traveled for holidays with both their ‘dear friends’. They even eventually decided to marry, yet as Natalia explained, it was only for legal reasons, so that each could inherit the rights to the art of another.