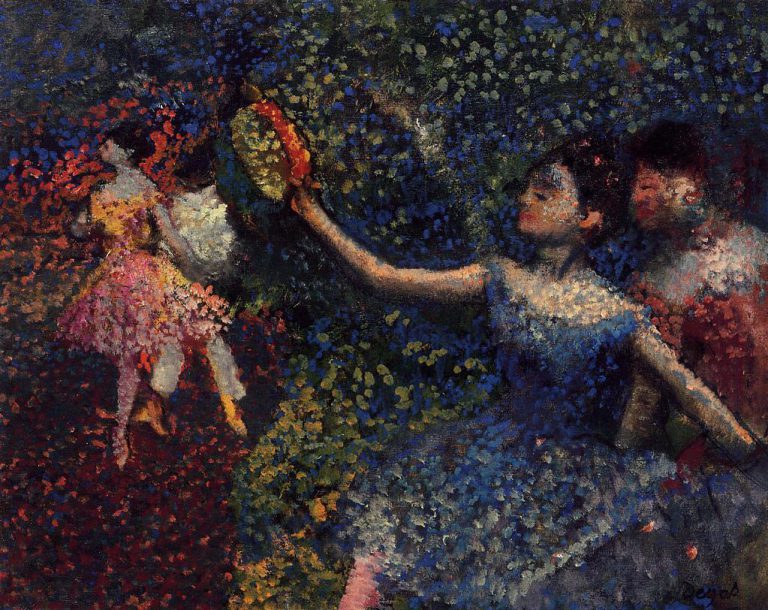 Impressionism has become one of the most significant movements of modern art. The names of Claude Monet, Auguste Renoir, or Edgar Degas are well-known, perhaps, even by those who are not very interested in art. There are big queues to view their paintings in museums. And there are even bigger ones to buy their paintings at auctions. Why does Impressionism still resonate with people today? We have gathered everything you need to know to understand Impressionism.

Eugene Delacroix was one of the artists that influenced the Impressionists. He was one of the first artists to realize that colors, applied with individual unmixed strokes, can more intensely convey the dynamics of the depicted moment. Besides using contrasting colors, he also tended to believe that a painting's plot should resonate with modern life.

Even though Delacroix's painting, Liberty Leading the People, 1830, is a masterpiece of Romanticism this did not stop it from becoming a precursor of Impressionism. The painting contained almost all of the features that in forty years time would become the main principles of Impressionism, including – the lack of classic clean lines; the use of vibrant colors; the dynamic brush strokes; and the new ways of exploring and recreating the play of light on the canvas.

However, the fundamental difference between Liberty Leading the People and the artworks of Impressionism is that the plot of the painting is made-up. The Impressionists aimed to depict reality and only true stories. They wanted to recreate on their canvases the life that takes place in the here and now.

The art of Gustave Courbet also had an influence on the Impressionists. He admired Delacroix, but he wanted to depict ordinary objects, and real things. He wanted realism – frank and imperfect.

The artist who best summarized the heritage of Delacroix and Courbet was Edouard Manet. He became the first "artist of modern life", and inspired a group of young artists who had been rejected by the Academy. These artists united in the first movement of truly modern art – Impressionism. Manet became a rebel of the Academy, although he did not want to, and led a group of dissident artists.

The evolution of the movement and its features

The center of the new art movement, was Paris in the second half of the 19th century. After their unsuccessful attempts to be admitted to the Academy, in 1863, they organized an event opposite the Academy Salon, for Impressionist artists (although they were not called that then).

Its organization was facilitated by Napoleon III himself. Of course, not out of kindness, but for political motives. It was due to him that the unappreciated artists got a platform to demonstrate their artworks. Aside from that, it was a clear signal that there was an alternative to the stale art of the Academy. The exhibition was called the "Salon des Refuses", which means “Exhibition of Rejects”. It did not impress ordinary visitors but did fill the young artists with new ideas.

Thirty artists gathered for the first exhibition of the Impressionists, which was called the "Anonymous Society of Artists, Sculptors, Engravers, and Others". It took place on 15 April, 1874, at 35 Boulevard Capuchin, in Paris. There was no selection panel, and anyone who paid the fee could take part.

Reviews of this innovative style were unfavorable. The critic Louis Leroy, published a devastating critique of the exhibition in the newspaper Le Charivari. He also,unintentionally, provided the name for the new movement and also described its key features in his criticism.

The principles of Impressionism

The main features of Impressionism include:

– a true picture of modern scenes from life;
– use of vivid natural colors;
– a desire to convey the ephemerality of the moment, movement, emotion, dynamics, and form an impression on the audience;
– giving preference to the play of light over the accuracy of the image;
– painting outside, not in the studio, to accurately convey light effects; consequently, the plots were mostly not staged;
– the plots were modern, urban, casual, bourgeois;
– the use of dynamic strokes, in which colors are not mixed.

Over time, Impressionism became more and more popular until it became established as a completely iconic movement – the first art movement of the modern world.

After the exhibition of 1874, seven more took place over the next 12 years. After 1886, the Impressionists as a group, divided by ideological differences, disintegrated. But the artists themselves did not disappear. They successfully worked on their new paintings, and they also remained impressionists (at least most of them). Like a divorced couple, they were just not together anymore.

Impressionism has become one of the most prominent artistic trends and a foundation of modern art. The movement gave birth to the ideas of the “color game” and the simplified depiction of objects. Its evolution transformed the art of the 20th century.

Want to learn more about Impressionism? We suggest: