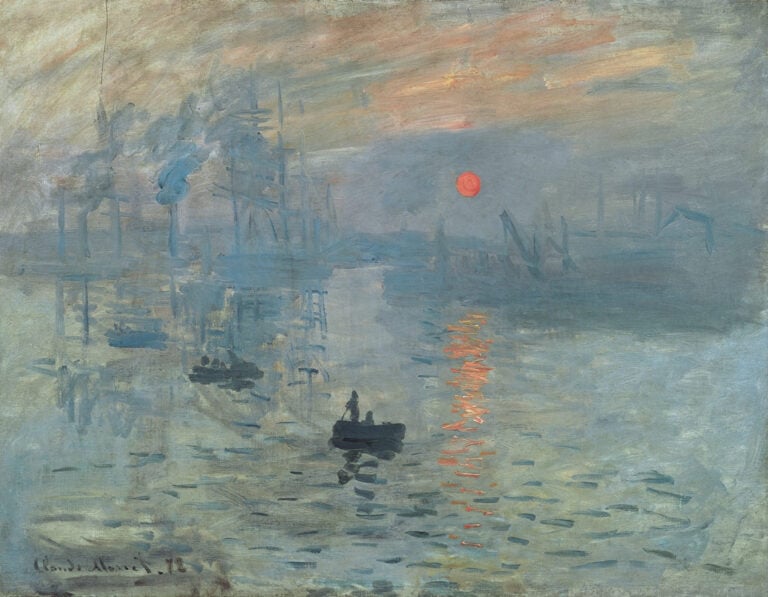 On this day in 1840 Claude Monet, one of the main founders French Impressionist painting, and the most consistent and prolific practitioner of the movement’s philosophy was born. You may think that you know everything about Monet – he is so famous and his paintings are so well-known. But maybe some facts from the list below will surprise you?

He was baptized as “Oscar-Claude”. However, his parents always called him “Oscar”.  This is probably to avoid confusion in the household, as his father was also named Claude. But to be honest, Oscar Monet doesn’t sound very well, does it?

Monet was drawing by the age of 5. While attending Le Havre secondary school of the arts, the locals knew Monet well for his charcoal caricatures of teachers. Monet filled entire school books with drawings instead of the assignments that were due. Then he started to draw town’s residents.

3. The artist or the Shopkeeper

In June 1861, Monet joined the First Regiment of African Light Cavalry in Algeria for a seven-year commitment. However, after two years later, he had contracted typhoid fever. The army agreed to release him from his service commitment, but only if he agreed to complete an art course at an art school. Rejecting the rigidity of conventional training, he enrolled in the Academie Suisse, a studio without a set curriculum where students could set their own schedules and paint from life models as well as exchange ideas.

Monet married his first wife, Camille in 1870.  Even though Monet was having success with his art, they lived in poverty for a long time.  Some of Monet’s paintings were seized by creditors. Monet even tried to kill himself by drowning in the Seine because his financial burdens were upsetting him so badly.

Monet painted the famous Impression, Sunrise (Impression, soleil levant) in 1872. It depicted a Le Havre port landscape. In 1874 it hung in the first Impressionist exhibition. Thanks to this painting the whole movement is now called “Impressionism” – The art critic who came up with this adjective meant his assessment to be negative, but the Impressionists at the time approved of description and it stuck.

At the young age of thirty-two, Monet’s wife, Camille Monet, died of uterine cancer. Even while on her deathbed, Monet took the opportunity to paint her. In my opinion it is one of the most intense paintings ever created.

Alice Hoschedé was the second important woman in Monet’s life. Alice was the wife of department store magnate and art collector Ernest Hoschedé. But when he went bankrupt in 1877, Ernest, Alice, and their children moved into a house in Vétheuil with Monet, Camille, and the Monets’ two sons, Jean and Michel. When Camille died in 1879, Alice soon left Ernest and married Monet in 1892, a year after Ernest died.

At the end of his life Monet suffered from cataracts. You can easily spot the paintings he created in that period as they have a reddish tone due to his change in color perception and are quite blurry. Monet may have used strong colours in these paintings also because he was using them from memory or because he was over-compensating for his yellow vision.