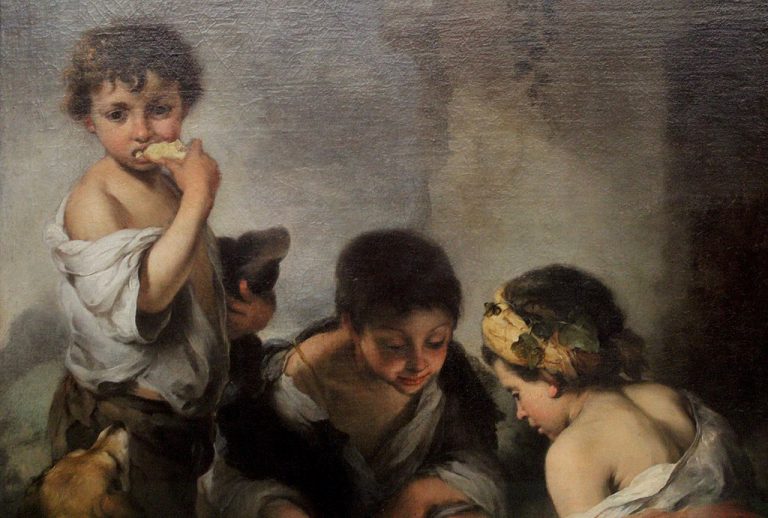 A Journey to Al-Andalus: Part II, The Cultural Crossroads of Seville

Now that the current pandemic is deepening social inequalities around the world, it is worth looking at how Murillo, one of the best-known Spanish Baroque painters depicted poverty and suffering in Seville more than three centuries ago. Can we see in Murillo’s paintings the city’s economic decline, ravages of the Great Plague, and changes in the Catholic Church’s understanding of poverty?

Bartolomé Esteban Murillo was born in Seville as the youngest of the fourteen children of Gaspar Esteban and María Pérez Murillo. He was baptized on the 1st of January 1618 and became an orphan at an early age, after the death of his father in 1627 and of his mother in 1628. As many Sevillian young people of his time, he was about to embark for America at the age of fifteen. The journey never took place, and although his works were later copied and imitated in the New World, there is no evidence that he ever visited the American territories of the Spanish empire.

Little is known about his early years as a painter. He probably began his apprenticeship under the direction of Juan del Castillo around 1635. The dramatic contrast of lights and shadows in his early works suggests the influence of Francisco de Zurbarán, a painter often referred to as “the Spanish Caravaggio.” In 1645, Murillo married Beatriz de Cabrera. Though in this time best known for his religious works, he was also a portraitist and a painter of genre scenes.

In 1660, Murillo and Francisco de Herrera the Younger founded the Academy of Painting. During the following two decades, Murillo painted many of his major works, including the famous Immaculate Conception of Los Venerables. Commissioned by Justino de Neve, president of the Hospital de los Venerables, this painting of the Virgin Mary exemplifies the softness of Murillo’s later style. In contrast with the tenebrism of his early works, the tenderness of the Immaculate Conception inspires devotion and intimate religious sentiment. The painting was taken to France during the Napoleonic period and returned to Spain in 1941, where it is currently on display at the Museo del Prado.

In 1682, while working for the Capuchin church of Cádiz, Murillo fell from a scaffold and died as a result of his injuries.

Seville: A City of Lights and Shadows

Murillo lived and worked in a city of contrasts. In the 16th century, Seville had been one of the largest metropolises in Europe. It was a densely populated and culturally diverse city whose wealth was based on trade with the American territories of the Spanish empire. In the 17th-century, however, Seville was no longer as prosperous as it had been. And, as is often the case with epidemics, its cosmopolitan nature became a disadvantage during an outbreak of the Black Death. The Great Plague, which probably originated in Algiers, affected Andalusia and the Mediterranean coast of Spain from 1647 to 1652. In Seville, around 60,000 people (46% of the population) died as a result of the disease, including three of Murillo’s children.

At the social level, the ravages of the plague and the economic decadence of the city reshaped the Sevillians’ mentality. Feelings of pessimism and guilt for past sins arose. After a century of prosperity and self-confidence, came the times of crisis and self-examination.

The terrible plague of 1649, with its terrifying mortality and its consequences of irreversible ruin, altered individual consciences and collective behaviors. The nonchalant and self-confident city, sometimes rogue, sometimes glorious, became a pale memory of itself, a mirror in which its inhabitants ceased to recognize themselves.

Murillo and the Shadows of Seville

Poverty had overshadowed the splendor of Seville since its times of prosperity. But in the time of Murillo, and particularly after the plague, the number of orphans and abandoned children in the city increased. Those who were not fortunate enough to be welcomed into one of the shelters run by religious institutions had to survive by begging. And in doing so, they led a precarious life which often included petty crimes committed out of necessity.

In addition, the Catholic Church’s vision of poverty had changed with the Counter-Reformation. The emphasis shifted from criticizing the vices of the poor – such as uncleanliness, idleness and immorality – to viewing them as the earthly image of the suffering of Christ. As a result of this change, the new religious orders which emerged with the Counter-Reformation did not see poverty as a threat to the social order, but as an opportunity to exercise Christian charity and love of one’s neighbor.

One of the best-known representatives of these ideas in Seville was Miguel de Mañara. Born in 1627 and raised in a wealthy family, he led a dissolute life as a young man. But after the death of his wife in 1661, he decided to redeem his sins by taking care of the poor. Therefore, he became a member of the Hermandad de la Santa Caridad (Brotherhood of the Holy Charity) in 1662. A few years later, as the leader of the brotherhood, he spent a fortune in the construction of a new hospice for the poor and engaged prominent members of Sevillian society in his cause. Among them were noblemen and the painters Murillo, Zurbarán, and Valdés Leal, who was also his friend and admirer.

Murillo immortalized Seville with its lights and its shadows. Paintings such as The Young Beggar, Two Children Eating a Melon and Grapes, Young Boys Playing Dice, Old Woman Delousing a Child and Three Boys are the pictorial representation of the ideas that circulated in 17th century Seville about poverty, charity and love of neighbor. Those ideas, in turn, were formed in a context of deep suffering and despair generated by the city’s economic decline and the ravages of the Great Plague.

In the art world, it is commonly agreed upon that still life painting as a genre rose in the Northern and Spanish Netherlands in the last quarter of...

Chinese culture has always been an object of European fascination – in art history, we see it in paintings, ornaments, architecture, fashion, and...