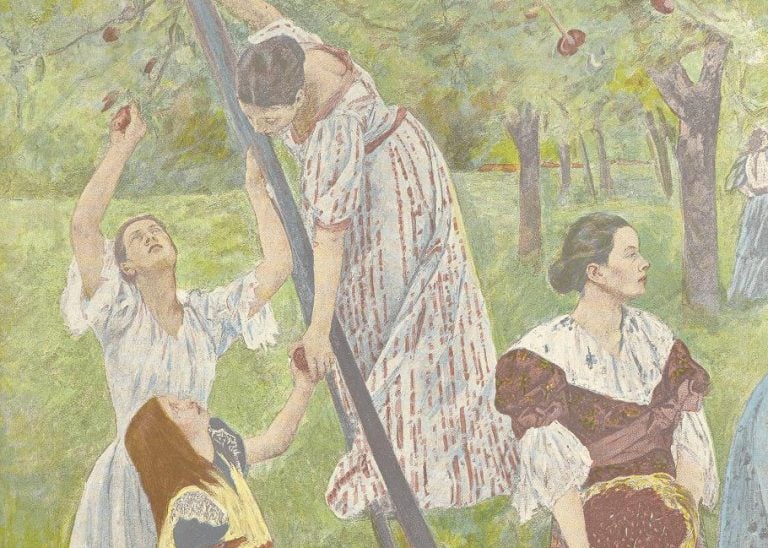 Mary Cassatt. The Story of the American Impressionist

Mary Cassatt was a well-known Impressionist who often illustrated motherhood and traditional female activities in the 19th century. When she was 50, she received a commission that shed new light on her entire oeuvre: a mural presenting a modern woman.

The story began with the 1893 World’s Columbian Exposition And Fair which promoted important achievements in industry, art, and science since Columbus’ arrival in America 400 years before. The fair took place in Chicago, and Cassatt was asked to paint a 58 x 12 feet (17,6 x 3,6 meters) mural for the north tympanum over the entrance to the Gallery of Honor in the Woman’s Building, which was to showcase the advancement of women throughout history.

Cassatt’s work on Modern Woman faced a complementary mural on Primitive Woman created by Mary Fairchild MacMonnies. It depicted women at an early stage of the development of civilization.

When Cassatt received this commission in 1892, she wrote to Louisine Havemeyer, explaining why she decided to take it up (hint: to annoy her friend, Edgar Degas!):

I am going to do a decoration for the Chicago Exhibition. When the committee offered it to me to do, at first I was horrified, but gradually I began to think it would be great fun to do something I had never done before and as the bare idea of such a thing put Degas into a rage and he did not spare every criticism he could think of, I got my spirit up and said I would not give up the idea for anything.

Her work is highly allegorical and alludes to the Bible (women picking the fruit of knowledge), as well as to art history and masters such as Sandro Botticelli. It is a triptych whose central panel, Young Women Plucking the Fruits of Knowledge or Science, was inserted between the panel of Young Girls Pursuing Fame (on the left) and Arts, Music, Dancing (on the right), which featured young women engaged in the arts.

Cassat’s mural had a feminist feel to it as it presented contemporary women passing the knowledge to new generations, women creating art, and women who were ambitiously pursuing their dreams. Moreover, her style was very modern and also quite different from her previous ephemeral and idyllic works.

This combination was too much for the contemporary audience and Cassatt was heavily criticized (including by her friend, Degas), to the extent that the panel disappeared right after the fair and has never been found – some speculate it was destroyed while in storage.