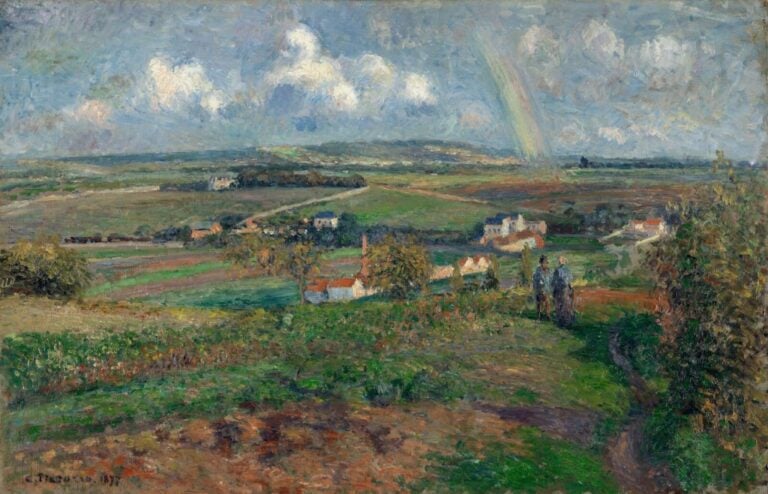 Camille Pissarro has an interesting portfolio of paintings. His works are divided between cosmopolitan views of Paris and countryside views of Pontoise. He is an artist that easily fits in sumptuous parlors and sunny parks. Rainbow at Pontoise is one such painting that showcases the rural charms of the French countryside. It now hangs in the collection of the Kröller-Müller Museum in Otterlo, Netherlands.

Camille Pissarro (1830–1903) was one of the most important Impressionist painters of his time. He was both a friend and mentor to many other famous artists. Paul Cézanne would regularly visit Pissarro in Pontoise and Vincent van Gogh regularly sought Pissarro’s mentorship. It was Pissarro who encouraged Van Gogh to use brighter colors and bolder strokes. He was also one of the first admirers of Van Gogh’s works.

Camille Pissarro, alongside Monet, helped establish the Impressionist movement. He believed in capturing the fleeting moments of daily modern life. With the increasing intensity of industrialization, life was moving at a faster pace. People could now travel by train instead of carriages. Distances that previously took a day’s journey now shrank into just a few hours. Visiting the countryside became easier, more affordable, and more popular than ever. Camille Pissarro was not immune to the pleasures of the countryside. He was so affected by its pleasures, that he eventually moved to the country village of Pontoise in 1872. This small community on the River Oise and northwest of Paris is the setting of Rainbow at Pontoise.

Camille Pissarro captures the landscape surrounding Pontoise with the brevity, speed, and spontaneity of a true Impressionist artist. Brush strokes of pure color are boldly applied to the canvas. The impermanence of nature is captured in the fleeting shadows and flickering lights of a rainbow and moving clouds. A storm is passing over the viewer in Rainbow at Pontoise. Dark clouds cover the sky above the foreground causing the closest grasses and plants to be in shadow. Further away the clouds have parted, and the houses are bathed in blissful light. A rainbow appears on the horizon adding a vibrant contrast to the distant white clouds. Rainbow at Pontoise is a landscape of changing light and shadow.

Camille Pissarro captures the ordinary subjects of daily life with truth and love to reveal their extraordinary beauty. He shares his experiences through his paintings by blending what he sees with what he feels. Pissarro blends visual objectivity with emotional subjectivity. He is clearly happy as he captures his beloved home of Pontoise. The abundance of beaming colors, bracing brushstrokes, and blissful energy evoke Pissarro’s happiness as he sees and paints Rainbow at Pontoise. It fuses the artist’s outlook and the village’s landscape. Pissarro and Pontoise are united in brilliant glory. It is beautiful!