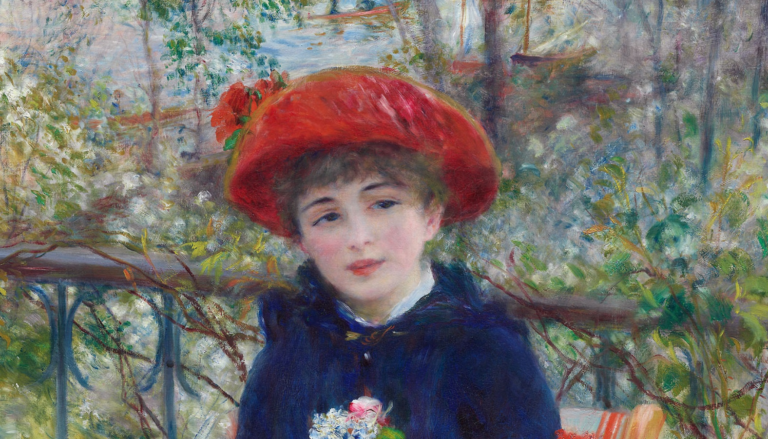 This beautiful painting by Pierre-Auguste Renoir is known under two titles. The first one – Two Sisters (in French: Les Deux Sœurs) was given to the painting by the artist himself, and the second – On the Terrace (Sur la Terrasse) by its first owner Paul Durand-Ruel.

Pierre-Auguste Renoir depicted the radiance of lovely young women on a warm and beautiful day. The older girl wears a female boater’s blue ﬂannel. Renoir worked on the painting on the terrace of the Maison Fournaise, a restaurant located on an island in the Seine in Chatou, a western suburb of Paris. The artist spent much of his time there in the spring of 1881. Over the railings of the terrace, you can see shrubbery and foliage with the river Seine behind it.

The painting was already underway by April 19, 1881, when, at lunch in Chatou with the American painter James McNeill Whistler, Renoir spoke of postponing a planned trip to London:

The weather is fine and I have my models; that’s my only excuse.

In real life, the girls were not actually sisters. Jeanne Darlot (1863–1914), a future actress who was 18 years old at the time, posed as “the elder sister.” Unfortunately, the identity of the model for the “younger sister” is unknown.