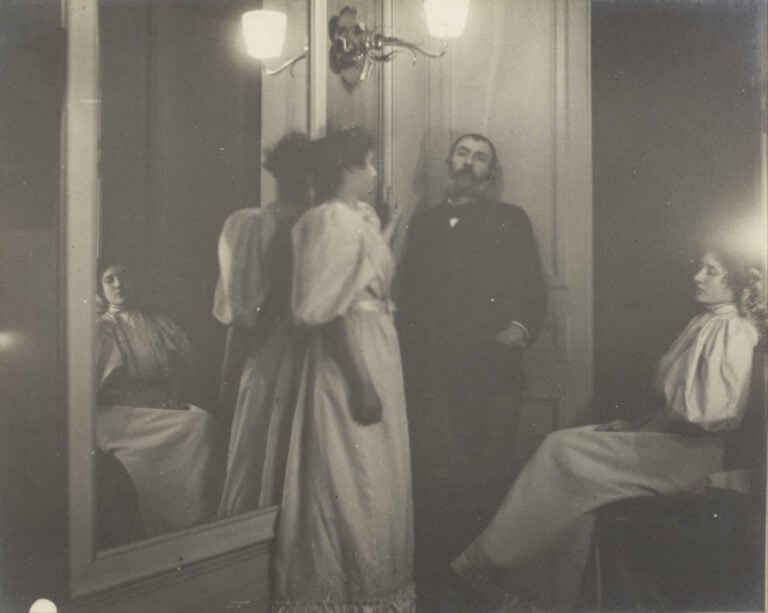 Today is World Photography Day. On this day, August 19th, in 1839 the French government bought the patent for the daguerreotype and released it “free to the world.” On this special occasion, we have prepared a special article revealing little known photographs taken by famous French impressionist Edgar Degas.

Edgar Degas became passionate about photography in the autumn of 1895, when he was 61 years old and the eighth and final impressionist exhibition was a decade behind him. Edgar Degas’ photographs are little known even among devotees of the artist’s paintings and pastels, and that’s a real shame. His photographic figure studies, portraits of friends and family, and very interesting self-portraits are truly hypnotizing. Most of these photographs were taken in the evenings, during dinner parties lit with oil lamps. Currently fewer than 50 of them survive. Here are some of them:

This photograph of a woman putting on stockings shares a specific theme so typical of Degas. The artist, a bachelor, showed a strong curiosity in the private, everyday rituals that women perform – bathing, dressing, and ironing. Yet he would have had few opportunities to candidly observe a woman in this position. Scholars are not certain whether Degas posed an artist’s model in his studio or actually took his camera to a brothel.

Louise Halévy, Edgar Degas’ friend since childhood, fell asleep reading. The gas lamp that illuminates the whole scene is so intense that it appears in the picture as a dominating, unmodulated white flare, thus breaking the rules of “good” photography. A similarly positioned woman is visible on the print from ca. 1879. She is reclining on a bed, and her naked body is barely visible in dim light.

In the Self-Portrait from 1895, Edgar Degas photographed himself with Christine and Yvonne Lerolle – two daughters of Henry Lerolle. It is somewhat interesting to look at a photograph of an artist whose face is more commonly recognized in his painted self-portraits.

After the Bath, Woman Drying her Back

Like many artists, Edgar Degas made photographs as preparatory studies for his drawings and paintings. He was also famous for bullying his models and forcing them to hold complicated poses. This photograph may have been made in connection with a series of drawings with women dressing and bathing. Her pose is purely formal – she does not appear to be drying any part of her body.

Here we have something that everyone was waiting for: a photo of a ballet dancer. The scene is bathed in half-light. The dresses of the girls seem to shine in semi-darkness. As the master intended, the light source remains invisible: no doubt it is a combination of several lamps.

Portrait of Henry Lerolle with Two of His Daughters

This photograph was taken at the house of painter Henri Lerolle, a great friend of Degas. As Daniel Halévy, son of Louise from one of the previous photos, who also gave Degas his first camera, said: “He went back and forth… Running from one end of the room to the other with an expression of infinite happiness.”