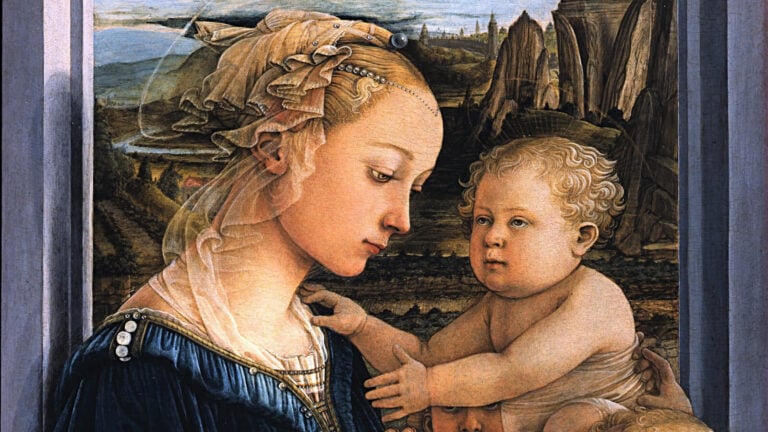 Annunciation and Adoration of the Magi by Fra Angelico

On the surface, Fra Filippo Lippi’s Madonna and Child with Two Angels appears to be another typical Renaissance painting of the Virgin Mary and the Christ Child. It is beautifully painted in bold colors, smooth lines, and fine shadowing. However, looking past the initial beauty reveals a story as scandalous as the painter himself. Madonna and Child with Two Angels is filled with illicit love, broken vows, and unholy models. Let us explore a Lippi masterpiece. Let us explore a Renaissance scandal.

Fra Filippo Lippi was a Carmelite monk who was ordained as a priest in 1434. He lived the majority of his life in and around Florence, Italy making him an artist of the Florentine School. The early 15th century was an exciting time to live in Florence. It was the time of great artists like Lorenzo Ghiberti, Masaccio, and Fra Angelico who were laying the painterly foundations of the Italian Renaissance for later artists like Leonardo da Vinci and Michelangelo.

New ideas like humanism, and linear perspective were changing the painters’ views of the world. Painting in a more naturalistic style was becoming more acceptable in Christian religious paintings. The Virgin Mary could be painted as a real flesh and blood woman. The Christ Child could be depicted as a real baby and not as a miniature man. The sensuous beauty of the world could be used to magnify the spiritual beauty of the divine. Fra Filippo Lippi used these changing ideas throughout his Madonna and Child with Two Angels. He successfully conveys an image of a beautiful young mother and her plump healthy baby to become the Holy Mother and the Holy Child.

Madonna and Child with Two Angels depicts the two most important people of the New Testament – Mary and Jesus. Mary sits on the left side of the painting facing to the right with her hands in prayer, and her head slightly bowed in sad thought over her child’s fate. She wears the contemporary fashion of a 15th century Florentine noblewoman with pearls intertwined in her hair. The hair is fashionably dressed with a fine and transparent veil, and with a high hairline created by shaving or plucking the forehead. Mary may be a figure from the Bible, but she is presented as a courtly lady from the present full of living grace and charm.

Jesus, as a child, is held aloft by two angels standing at Mary’s knees. He reaches out to Mary with a tender motion like a real baby would reach for his mother. The angel in the front, and holding Jesus, smiles at the viewer almost inviting the viewing to partake in the domestic scene.

The four figures are compacted together and fill the majority of the canvas. The scene is a detail of a larger space implied by the cropping of Mary’s legs, and the front angel’s wings. The larger space in an interior room is signified by the window behind the four figures. The window provides an exterior backdrop and frames a view of a Leonardesque landscape depicting a valley below.

Based on all of these elements, it is clear that the painting depicts a small group of people sitting by a window inside a building on top of a hill overlooking a valley. The people and location all seem very specific because they are very specific. The viewer sees a person known as Lucrezia Buti, and a location known as the Arno River Valley. It is a real woman in a real place.

Lucrezia Buti was a beautiful nun who lived in the nearby city of Prato. One day in early 1456 when 50-year-old Fra Filippo Lippi was visiting Prato, he chanced to view the 21-year-old lovely sister and became instantly besotted with her. Maybe it was true love at the end, but it was scandalous lust at the beginning.

Fra Filippo Lippi abducted the half-his-age Lucrezia Buti and by pleading, groveling, and begging to her, she finally agreed to renounce her vestal vows and become his mistress. Nine months later, their first child was born, and he was named Filippino Lippi. Their baby boy permanently cemented their illicit union. The stain of scandal permanently dyed their lives like red ochre on white cotton.

Fast forward to 1460 when it is believed Fra Filippo Lippi began his Madonna and Child with Two Angels, Lippi decided to use his mistress and former nun as a model for the Virgin Mary. Lippi also decided to use his 4-year-old son as the angel in the foreground.

Historical records indicate that Fra Filippo Lippi and Lucrezia Buti had a second son, Alessandro, and therefore he could easily be the stand-in for the Christ Child. In essence, what Lippi painted was a family portrait with the trappings of a holy scene. The sinful models contrast against the saintly subjects. Sin and salvation blend together.

Fra Filippo Lippi was a colorful figure of the 15th century. He not only engaged in a May-December relationship with a nun, had two illegitimate children with her, painted her and their love children as the Madonna and Child, but he also dabbled in forgery and embezzlement. He was nearly thrown into jail but was saved by his patron, Cosimo de’ Medici, because in his opinion the artistic merit outweighed the artist’s criminal activity.

Fra Filippo Lippi was frequently on the edge of total disgrace. He flouted convention and lived as he pleased despite his monastic vows. Madonna and Child with Two Angels is the culmination of Lippi’s life. It fuses Renaissance ideals with Renaissance vices. It blends the holy with the unholy. It blends the sacred with the profane. Madonna and Child with Two Angels is a masterpiece of beauty and gossip. This is a Lippi legend. This is a Lippi scandal.