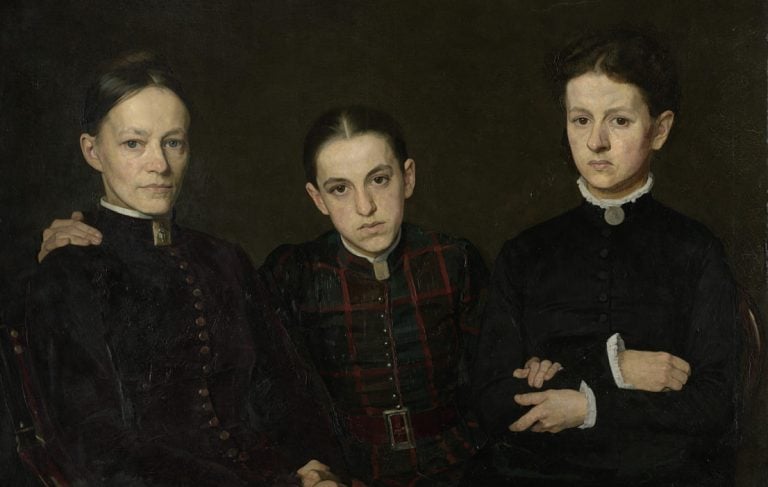 The Bugatti Brothers: A Story About Cars and Cows

The Dazzling Davies Sisters and Their Impressionist Art Collection

It’s not surprising that many artists having sisters, painted their portraits, especially early in their careers. They were probably easily available for modeling and they often supported the artists’ effort and careers. Each of the five portraits below depicts sisters in their own unique way – from an honest painting in a home setting to a splendid allegorical representation created for a wealthy client. Enjoy and share with your sister!

1. Portrait of Cornelia, Clara and Johanna Veth by Jan Veth

Jan Veth (1864-1925) was a Dutch painter, poet, art critic, and university lecturer, especially recognized for his portraits. He painted portraits of his contemporaries: artists, philosophers, and scientists. However, at the young age of 21, when he still lived at home with his family, Veth painted this very honest portrait of Cornelia, Clara, and Johanna – his three sisters. His father assessed the likenesses of his daughters with equal candor: “My opinion of these portraits is, and will always be, that they are excellent likenesses, which are anything but flattering, and there are a few sharp edges, which I would rather have seen some-what softened.”

2.  A Boy Feeding his Little Sister by Helene Schjerfbeck

Helene Schjerfbeck (1862-1946) remains a hidden gem of Finnish art. Her style changed dramatically throughout her life. That is why among her artworks, we find Realist, Symbolist, and Expressionist pieces. This painting depicts an everyday event: a boy feeding his little sister. Schjerfbeck created it in 1881 in Brittany, France. Schjerfbeck was enchanted by the models, she saw “something beautiful, fresh and genuine” in these Breton children. Even though critics found something appealing in the picture, this work aroused disapproval in the Finnish press – what gave offense was that the painting was large (115 x 94.5 cm) meanwhile its subject was trivial.

Bertha Wegmann (1847-1926) was one of the first professional female Danish painters, successful in her time and very sought after as a portrait artist. She also became the first woman to hold a chair at the Royal Danish Academy of Fine Arts. This portrait of her sister was awarded the Thorvaldsen Medal, the highest distinction within the visual arts in Denmark.

4. The Artist’s Sister Berta in a Rowing Boat, Study by Albert Edelfelt

Albert Edelfelt (1854-1905)  was one of the founders of the Realist art movement in Finland and one of the first Finnish artists to achieve international recognition. Edelfelt created a few paintings of women and girls in a rowing boat. This one depicts his sister Berta, 15 years his junior, who later became a teacher and a writer and published five collections of Albert Edelfelt’s letters. At the time of the painting’s creation, she’s a little girl of 10, which is emphasized by the size of the boat and the oar.

The Trip family was one of the richest Dutch families in the 17th century. In 1662 they moved to the so-called Trippenhuis, the stateliest private residence in all of Amsterdam. This portrait by Ferdinand Bol (1616-1680) of two of the Trip daughters was hanging above a mantelpiece in one of their private rooms. This painting represents the allegory of education – the older sister, Margarita, wearing a helmet and a breastplate, represents Minerva (goddess of art and science), and the eager student kneeling by her side is her 11-year-old sister Anna Maria.