Painting of the Week: Jean-Léon Gérôme, Truth Coming Out of Her Well 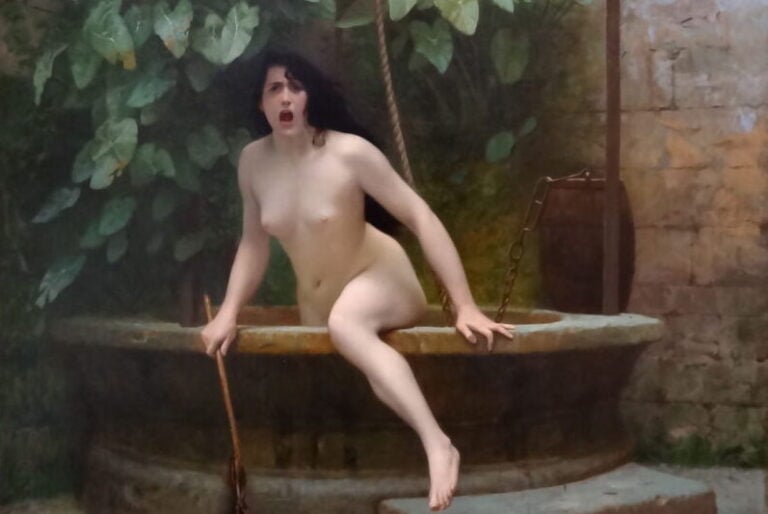 A fair-skinned woman, nude. Mouth open in either shock, rage, or maybe even disgust, as she emerges from a well. One leg is already draped over the edge, climbing out. With one hand she supports her body out of the well, with the other, she grasps the handle of a whip. Vines and bushes grow behind her and the well. On the stony walls of the building from which the well is part of, a glowing golden-red light casts shadows, marking sunset.

Truth Coming Out Of Her Well To Shame Mankind by Jean-Léon Gérôme (1824 – 1904) made its debut in the Paris Salon of 1896. Just as the painting itself is full of a sense of alluring ambiguity, so is the context and meaning behind it. We know that Gérôme took inspiration from a quote by the ancient Greek pre-Socratic philosopher Democritus: “The truth lies at the bottom of the well.” Gérôme actually carried this theme of a personified Truth into a series, with at least three other paintings.

The other pieces are lost, and Truth Coming Out Of A Well To Shame Mankind is the last of them. We can glean a bit more of context from one of the earlier paintings in the series. At the Paris Salon of 1895, one year prior to Truth Coming Out Of Her Well To Shame Mankind, Gérôme showed a painting called Mendacibus et histrionibus occisa in puteo jacet alma Veritas, which translates to The nurturer Truth lies in a well, having been killed by liars and actors. In this painting, Truth was crumpled at the bottom of a well, with her signature mirror lying next to her.

From this, it’s possible to assume that Gérôme is showing Truth at one point disregarded and murdered, and with Truth Coming Out Of A Well To Shame Mankind, she is returning to get her vengeance on humanity. But this still leaves some ambiguity as to who murdered her, and why Truth is full of rage and is coming to “shame” people. For Gérôme, the answer may point to an art style rising in popularity: Impressionism.

Gérôme was a product of the 19th century École des Beaux-Arts, where precision and accuracy was upheld. The painter valued this with such intensity that his contemporary, Eugene Benson, said that “Gérôme is a severe and comprehensive student of history and life.”

Gérôme’s paintings and style were met with reasonable popularity. But then by the mid-to-late century, Impressionism, with its painterly style, indecipherable lines, and splashes of color, began to eclipse both Gérôme and his style. The aged, mature artist who painted historical and oriental themes, as well as portraiture, didn’t hide his dislike of the younger group of Impressionist artists. Nor did they hide their dislike of him or his style. And while allegorical figures were typically an unusual theme for Gérôme, Truth Coming Out Of A Well To Shame Mankind may very well be a veiled criticism of the ‘dishonesty’ of Impressionism.

This interpretation of the Truth Coming Out Of A Well To Shame Mankind is backed by a preface that Gérôme wrote for a book by Émile Bayard. It may be about photography, but the artist references Truth:

“Photography is an art. It forces artists to discard their old routine and forget their old formulas. It has opened our eyes and forced us to see that which previously we have not seen; a great and inexpressible service for Art. It is thanks to photography that Truth has finally come out of her well. She will never go back.”

Truth Coming Out Of A Well To Shame Mankind now calls the Musée Anne de Beaujeu in Moulins, France. Because the definite meaning of the painting is still up for debate, a curator at the museum has said: “This is our Mona Lisa.”