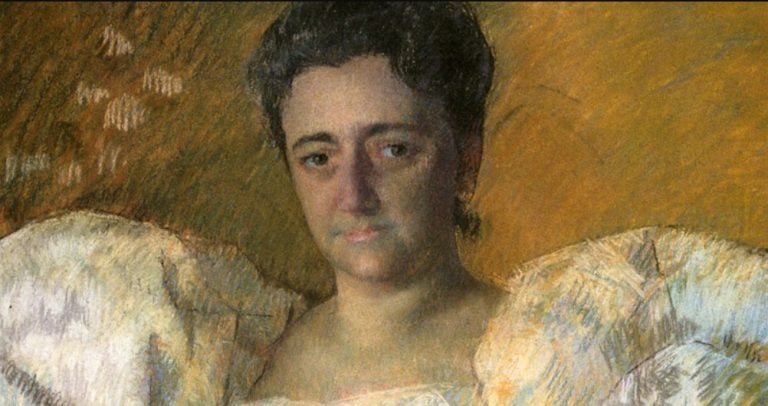 Her Life and Her Museum: Isabella Stewart Gardner

The Dazzling Davies Sisters and Their Impressionist Art Collection

A great pioneering art collector, Louisine Havemeyer (1855–1929), was the first American to patronize the French Impressionists. Together with her husband Harry, she created a massive collection that included all kinds of world-class artworks.

Louisine Havemeyer was friends with the American-born Impressionist Mary Cassatt, who was her primary art advisor and “godmother of the collection”. After introducing young Havemeyer to the works of Edgar Degas, Cassatt advised her to acquire his pastel Ballet Rehearsal as her first purchase at the age of 22. With Cassatt’s guidance, Havemeyer would amass the world’s largest collection of Degas paintings, sculptures, and works on paper. She also collected other controversial French modernists, including Cézanne, Courbet, Daumier, Monet, Manet, and Renoir.

Louisine Havemeyer was savvy and opinionated, and she obviously wasn’t afraid of being unconventional. As a women’s rights advocate, she actively participated in the women’s suffrage movement. In 1919 she was arrested for burning an effigy of President Woodrow Wilson and spent at least one night in jail. After that, she went on a “Prison Special” tour with younger suffragettes who had also been arrested for the cause. Furthermore, Havemeyer organized a 1915 exhibition of works by Mary Cassatt and Edgar Degas to benefit the suffrage movement.

Louisine Havemeyer’s husband, Henry (Harry) O. Havemeyer (1847-1907), whom she married in 1883, was also a passionate art collector. However, Harry preferred Old Master paintings and Japanese art to Modernism. Fortunately, the two were truly equal partners in their collecting endeavors despite their differing tastes. The couple had a rule that both spouses had to agree before making any purchase.

Guided by Cassatt and funded by Harry’s sugar fortune, the Havemeyers collected world-class examples of just about everything. In addition to French Modernists, they bought Old Masters (including El Greco, Frans Hals, Rembrandt, Goya, and Bronzino), Japanese art, and decorative arts. Younger collector Albert Barnes felt that the Havemeyers had “the best and wisest collection in America.”

Although Cassatt wielded great influence on the Havemeyers’ acquisitions, the Havemeyers had their own opinions and tastes and did not blindly follow Cassatt’s lead. Interestingly, Mary Cassatt’s own work was not particularly well represented in Havemeyer’s collection.

One could study art and its relations to life to better advantage in the Havemeyer collection than in any single gallery in the world.

The Havemeyers were certainly not alone as American millionaire art collectors of the Gilded Age. Curator Gary Tinterow has compared their knowledge and passion to that of Isabella Steward Gardner, and Henry Clay Frick, and the vast scale of their purchases to J.P. Morgan. However, he also claims that Louisine and Harry’s pure love of art, rather than its associated prestige and social standing, set them apart from their contemporaries.

Tinterow additionally points out the lack of any Havemeyer Museum or Havemeyer Wing. This is because the family cared more about finding a good home for its masterpieces than about aggrandizing the family name. It’s also why the Havemeyers are not as well known today as Gardner, Frick, or Morgan. When Louisine died in 1929, she left the Metropolitan Museum of Art 142 paintings in her late husband’s memory. Unlike many other collectors, she did not try to make the museum display the entire gift together. She also specified that her three children could add to the bequest. Horace, Electra, and Adeline eventually donated nearly 2,000 pieces to the Met. Other institutions around the country also received Havemeyer pictures. Consequently, the collection increased French modern art’s then-slim profile in American art museums.

One of the most magnificent gifts of works of art ever made to a museum by a single individual.

– The Met’s official comment on the Havemeyer Bequest to the Met.
Quoted in Tinterow, Gary. “The Havemeyer Pictures” in Alice Cooney Frelinghuysen et al. Splendid Legacy: The Havemeyer Collection. p.3.

Learn more about Louisine Havemeyer in Splendid Legacy: The Havemeyer Collection, which is available for free online, as well as in her memoir, Sixteen to Sixty: Memoirs of a Collector. Also, visit the Shelburne Museum in Vermont, which Louisine’s daughter Electra Havemeyer Webb (1888-1960) founded to display her collection of Americana alongside some of her parents’ modern art. And, of course, you can see the Havemeyers’ treasures on view at the Met!