Painting of the Week: Gustave Courbet, Woman with a Parrot 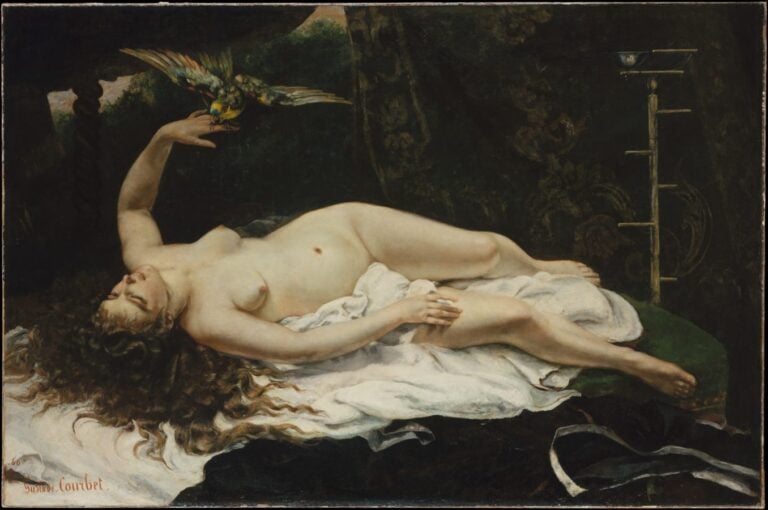 Gustav Courbet, the enfant terrible of French 19th-century art, did everything he could to save himself in the memory of the contemporary art critics. After the success of Cabanel’s Birth of Venus at the Salon of 1863, Courbet wanted to challenge the French Academy and painted two masterpieces. His first attempt in 1864 was rejected on the grounds of indecency; however, two years later, his Woman with a Parrot was accepted to be exhibited in the Salon of 1866.

The viewers were shocked by the presence of the model’s discarded clothing and disheveled hair. Although it triggered shocking reactions in many of its viewers, the provocative picture found favor with a younger generation of artists who shared Courbet’s disregard for academic standards. Manet began his version of the subject the same year, and Cézanne apparently carried a small photograph of the present work in his wallet.

In 1864, before Woman with a Parrot, Courbet painted Venus and Psyche. It depicted “a masculine-looking brunette [leaning] with an equivocal expression (hatred? lust?) over a sumptuous, sleeping blonde.” The sleeping girl, Psyche, is in a position almost identical to that of the woman in Woman with Parrot. Unfortunately, the painting was destroyed in an air raid in Berlin in 1945. By then, it had already done its job of making Woman with Parrot appear relatively modest compared to Courbet’s other compositions. Two nudes was too much for the contemporary critique. One was enough.

Louisine Havemeyer, a famous US art collector, feminist, and philanthropist who initially bought the work, had the sense of what it would become. She recalled, “I begged Mr. Havemeyer to buy the picture. Not to hang it in our gallery lest the anti-nudists should declare a revolution and revise our constitution, but just to keep it in America, just that such a work should not be lost to the future generations.”

And luckily it wasn’t.