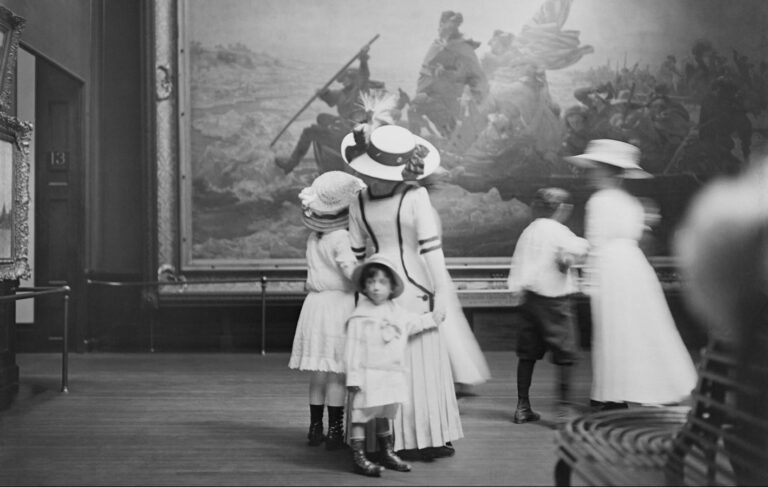 It’s time to celebrate 150 years of the Met! The Metropolitan Museum of Art in New York City is America’s largest and most important art museum. It’s also one the most significant museums in the whole world. It has a vast, encyclopedic collection, exciting exhibitions, high-level scholarship, and a spacious building on the Upper East Side. According to the museum’s website, you can “experience 5,000 years of art at The Met”, and that’s certainly true. Every art lover will find plenty to enjoy there.

The Metropolitan Museum of Art collects, studies, conserves, and presents significant works of art across all times and cultures in order to connect people to creativity, knowledge, and ideas.

The Metropolitan Museum of Art’s Statement of Mission, adopted in 2015.

In 2020, the Met celebrates its 150th birthday with a year of special events. To kick things off, let’s look back at some milestones in 150 years of the Met.

July 4, 1866 – American lawyer and diplomat John Jay (1817-1894) first proposed founding an art museum in New York City. He made the suggestion to influential Americans attending a Fourth of July party in Paris, and his idea quickly gained traction.

April 13, 1870 – The Metropolitan Museum of Art was officially incorporated with the state of New York. Its purpose was:

encouraging and developing the study of the fine arts, and the application of the arts to manufacture and practical life, of advancing general knowledge of kindred subjects, and, to that end, furnishing popular instruction and recreation.

However, it did not yet have art to display nor a place to display it.

February 20, 1872 – The museum opened to the public. Its first home was a leased space in the Dodworth Building at 681 Fifth Avenue, near present-day MOMA.

1874-6 – The Met acquired the Cesnola Collection of ancient art from Cyprus. This was the first of many major private collections to find a home in the museum. It also represented the Met’s first big step into the world of classical art, since the majority of its earlier acquisitions were Old Masters. Collector Luigi Palma di Cesnola (1832-1904) became the first director in 150 years of the Met.

March 30, 1880 – The Metropolitan Museum of Art moved to its long-term address at Fifth Avenue and 82nd Street, just inside Central Park. On this date, the museum’s first permanent building opened. It was a Neo-Gothic brick building designed by Calvert Vaux and Jacob Wrey Mould. This original structure still exists, but it’s been absorbed on all sides by later additions. You can see a portion of the old brick facade in one place. Just enter the Lehman Wing from the medieval galleries and look back the way you came.

December 1902 – The Met as we see it today took shape when Richard Morris Hunt’s now-iconic Beaux-Arts facade and Great Hall opened to the public.

1917 – Among the Met’s 1917 acquisitions was a small, blue faience statuette of a hippopotamus. It was made in Twelfth-Dynasty Egypt (c. 1961-1878 BCE), buried in a tomb, and excavated in 1910. Ancient Egyptian faience animals, including hippopotami, are fairly common, but the Met’s version became particularly popular with visitors. Christened William in the 1930s, he is now the Met’s mascot. The Met Store sells William the Hippopotamus-themed souvenirs, like socks, flash drives, and Christmas ornaments. To celebrate William’s centenary in 2017, Conversation between Two Hippos displayed him beside a modern version by Carl Walters.

May 10, 1938 – The Cloisters, the Met’s medieval art outpost, opened with an initial collection formed by George Grey Barnard (1863-1938). It’s located in Fort Tryon Park, in northern Manhattan, on land donated by the John D. Rockefeller, Jr. (1874-1960). The medieval-inspired building is a 20th-century construction, but it contains many real Gothic and Romanesque elements. These include four medieval cloisters and the apse of a 12th-century Spanish church. All were purchased from their original sites in Europe, dismantled, sent to New York, and installed into the fabric of the museum. This makes the Cloisters a rare place where you can experience genuine medieval architecture in the North America.

The Cloisters large collection of medieval treasures includes the Unicorn Tapestries, the Cloisters Cross, and the Belles Heures of Jean, Duc de Berry. Although the Met Cloisters has never been as well known as the main building on Fifth Avenue, it gained visibility in 2018 when it hosted part of the Costume Institute’s annual exhibition Heavenly Bodies: Fashion and the Catholic Imagination.

1946 – The Museum of Costume Art joined the Met to became the Costume Institute, a repository of historical and contemporary fashion. The Costume Institute’s annual fashion exhibitions have become much anticipated events. The Met’s 2009 acquisition of the Brooklyn Museum’s vast costume collection has only enhanced them further. The Met Gala, a glamorous, celebrity-studded event that opens the yearly exhibition, first took place in 1948.

February 4 – March 4, 1963 – The most famous painting in the world came to New York in the winter of 1963. Leonardo da Vinci’s Mona Lisa appeared in the Met’s medieval hall for about a month; she also visited the National Gallery of Art in Washington D.C. Attendance was spectacular. People waited in line for hours in the freezing cold to see the Mona Lisa. Over 60,000 people saw the painting in one day alone.*

1971-1991 – Under directors Thomas Hoving (1931-2009) and Philippe de Montebello (b. 1936) the Met put together a long-range master plan and executed a major expansion by Kevin Roche John Dinkeloo and Associates. This massive project created many of the spacious, light-filled galleries we enjoy today, such as the American Wing in 1980 and the Michael C. Rockefeller Wing for arts from Africa, Oceania, and the Americas in 1982. This building campaign included new galleries for the next two milestones on this list.

1975 – American banker Robert Lehman (1891-1969) spent decades assembling a world-class art collection that he displayed in his New York City townhouse. Upon his death, Lehman left almost 3,000 objects to the Met under the condition that his entire collection be displayed together in a replica of his townhouse. Unusually, the Met agreed and built the Robert Lehman Wing to fulfill these wishes. The Lehman Collection includes Old Master paintings, masterpieces of Impressionism and Post-Impressionism, early Italian art, Renaissance furniture, and precious objects of porcelain and metalwork.

1978 – The Met added a very special object to its collections. The Temple of Dendur is a first century BCE temple from Roman-ruled Egypt. When Egypt built the Aswan Dam in the 1960s, the temple and numerous other historic sites in the flood zone faced certain annihilation. Through efforts by UNESCO, fifty countries contributed money and expertise to record and save as many of these monuments as possible. The Egyptian government gave the Temple of Dendur to the United States in gratitude for the country’s major contributions. The Met beat out several other American institutions to get the temple, largely because of an inspired plan to house it.

The Sackler Wing was designed and built specifically for the Temple of Dendur. This massive pavilion has a sloping glass wall so that the temple retains the appearance of being outside while actually enjoying protection from the elements. An artificial waterway runs around it. Visitors can walk through the Temple of Dendur, and I highly recommend the experience. The Sackler Wing also hosts many performances and cultural events set against this unforgettable backdrop. Two U.S. Presidents have held state dinners there. Learn more about the Temple of Dendur here.

2000s – The end of the 20th century marked the last major expansions in 150 years of the Met. Instead, the museum has focused on renovation, giving existing galleries fresh new quarters that have allowed curators to update and re-imagine permanent displays. The Galleries for the Art of the Arab Lands, Turkey, Iran, Central Asia, and Later South Asia (Islamic art) were completely renovated and reinstalled in 2011. The American Wing got a face lift in 2012, and the Costume Institute’s basement galleries were updated in 2014. Continuing this trend, newly refreshed British decorative arts galleries will open on March 2, 2020.

2011 – The Costume Institute’s summer shows are always well attended, but none before or since has ever taken off quite like Alexander McQueen: Savage Beauty. This 2011 exhibition of dramatic couture by the recently-deceased British fashion designer attracted 661,509 people.** The museum had to extend both the duration of the exhibition and daily museum hours to meet the demand.

2016 – The Met acquired its second outpost in the Breuer building, formerly home to the Whitney Museum of American Art. It is located on Madison Avenue not far from the Met’s main building. When the Whitney moved out in 2014, this iconic building’s future was uncertain until the Met signed an eight-year lease on the space. The Met Breuer, as it’s now called, focuses on modern and contemporary art, which have not traditionally been well-represented in the main building. However, rumor has it that the Met may leave the Breuer building soon. If so, the Frick Collection will likely exhibit there during its upcoming renovation.

2020 – The Met turns 150. The museum is celebrating 150 years of the Met with events all year long, including the special exhibition Making the Met, 1870-2020. There will also be three days of festivities on June 4-6. Check out all the details on The Met 150 website.

The Metropolitan Museum of Art is temporarily closed due to coronavirus. It is currently unclear how this will effect the planned 150th anniversary celebrations. However, an April 3rd, 2020 email to members from Met director Max Hollein promises that Making the Met, 1870-2020 will be the first new exhibition once the museum re-opens. Making the Met had already been installed before the shutdown and is all ready for visitors. Click here to read a New York Times article about it.