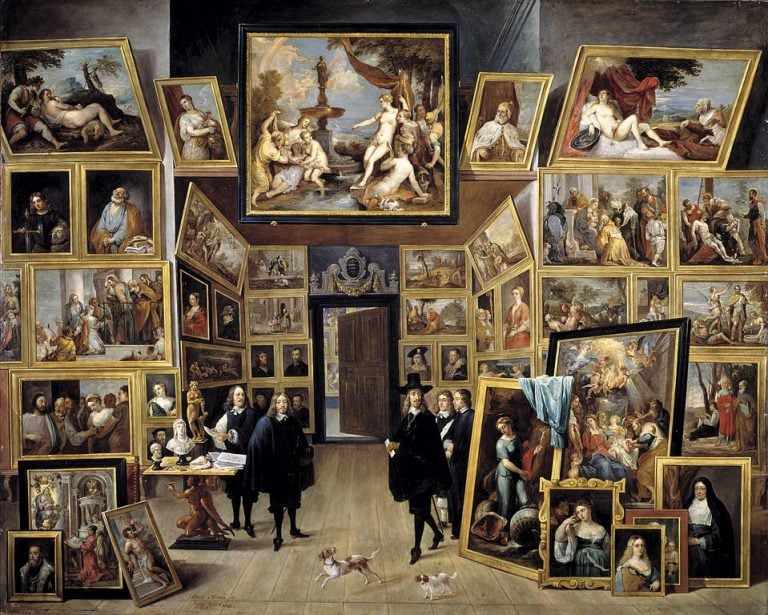 Masterpiece Story: The Ambassadors by Hans Holbein the Younger

The Mystery of Dürer’s Magic Square

A few weeks ago, the art world celebrated the complete restoration of Vermeer’s Girl Reading a Letter at an Open Window. It turns out that on the wall there was a Cupid painting. As a result, a re-interpretation of the work was necessary. But it’s hardly the only example of this – in fact, this is a current resource when depicting interiors. Sometimes there are galleries or exhibitions, and some artists use them to represent the senses. Others use it as a way of an homage to their inspirations and influences. Let’s take a look at some examples in Western art history. It’s always fun to try to identify some of those paintings within paintings.

Hanging on the Wall

Genre painting was prominent in Northern European countries, and especially during the Dutch Golden Age. We already mentioned Vermeer, but many artists used paintings to add more meaning to their depictions of everyday life. Samuel van Hoogstraten (1627-1678) put images within many of his paintings. For example, in The Slippers, he included pieces from a contemporary and rival artist, Gerard ter Borch (1617-1681). The woman in a silver satin dress turning her back on us was a known figure in ter Borch’s works.

We see how Hoogstraten uses the doorkijk as a framing device. It presents a door to another room, which allows the artists to convey a pictorial explanation. In his Doctor’s Visit, we can see two more rooms. In the background, there is the lower-left corner of Raphael‘s School of Athens. Honestly, what Pitagoras and his disciples had to do with a possibly pregnant lady is not clear. But it was certainly not an arbitrary choice.

Royalty and aristocracy have always been linked with the art world. Consequently, this relationship became a way of projecting power and status through ambitious portraits and collections. The quality of someone’s acquisitions gave them prestige. To show off, many of them started to demand depictions of their galleries in the Netherlands. That was the case with Archduke Leopold Wilhelm. He came to own about 1400 paintings! However, in this version, we can only see 51 Italian scenes. Can you find Judith with the head of Holofernes by Carlo Saraceni, or Cain kills Cabel by Bartolomeo Manfredi? The collection was so extensive, there are five other works of it, all by Teniers.

Another impressive example of this sort of painting is the Tribuna of the Uffizi by Johan Zoffany. It was ordered by Queen Charlotte and Zoffany, who traveled to Florence to see the Grand Duke of Tuscany’s collection. As expected, the gallery contained some of the best Renaissance and Baroque works. For example, there is Titian‘s The Venus of Urbino, a couple of Madonnas from Raphael, and Rubens‘ The Consequences of War. Other names present are Michelangelo, Guido Reni, Annibale Carracci, Correggio, Perugino, and more. He also included a portrait by Hans Holbein to add a  piece of England into the picture.

When the Salon Entered the Canvas

Let’s now talk about the famous Salon in Paris. This annual event in Paris started in 1667. Gradually, the Salon opened and became more substantial. By the 19th century, it was the most prestigious event in the Western art world. Paintings covered every inch of the walls from top to bottom. Although the artworks were not all displayed at eye level, it was still a success Not surprisingly, many of the artists depicted the actual Salon. Such is the case of François Joseph Heim and his work about the Salon of 1824 with Charles X. That year, crucial artworks such as Ingres’ Vow of Louis XIII were displayed. Moreover, that very painting is visible in Heim’s work.

Meta Paintings: A Feast for the Senses

Now, if you thought the previous examples featured many paintings within a painting, wait till you see the following allegories of the senses. It’s a party of meta paintings! What better way to represent the sight than to fill a canvas with as many pictures as possible. Together, Flemish painters and friends Jan Brueghel the Elder and Peter Paul Rubens created a series with this theme.

Every artist is influenced by their context, the art they saw throughout their life, and the people they met. Sometimes this is reflected in their technique or style. But sometimes, you literally can see it on the canvas through a painting with a painting. A great example of this is Velazquez‘s famous The Spinners or The Fable of Arachne. If you look at the back scene, there’s Pallas Athena and Arachne with her tapestry. According to Ovid, the mortal woman decided to weave the myth of the Rape of Europe. One can barely distinguish it, but it’s a copy from Titian’s own painting on the subject. Moreover, Rubens was friends with Velazquez and made a copy of the Venetian master.

Look at Me Painting!

Another way in which artists used paintings within paintings was to include their own works. One of those was Paul Gaugin. However, he didn’t choose any image. Instead, he put his own artworks as backgrounds. Watch his self-portrait of 1889-1891. His style is unmistakable as we identify his Yellow Christ from 1889.

In this category, we can find dozens of self-portraits by female artists. Since women were often excluded from the artistic life, those who managed to get through generally realized self-portraits of them working. It was as if they wanted to assert their profession – what better way of defying patriarchy than making a portrait of them as artists. Artemisia Gentileschi is an obvious example, but Sofonisba Anguissola, Judith Leyster, Rosalba Carriera, Giovanna Fratellini, and others did the same.