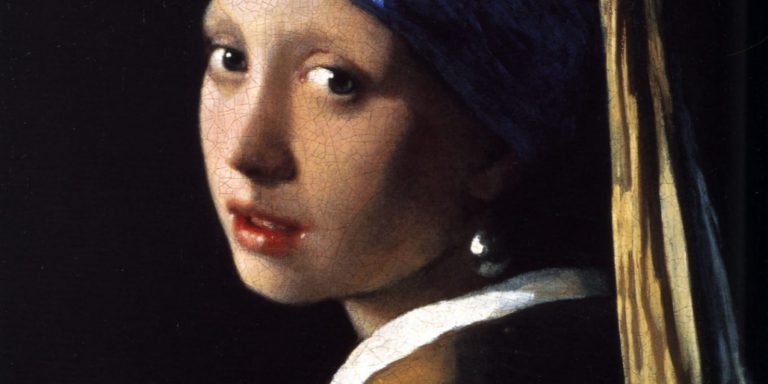 Johannes Vermeer was a Dutch painter who lived and worked in the Dutch Golden Age. Along with Rembrandt and Frans Hals, he is considered one of the most important representatives of Dutch Baroque. But little is known about him. His life seems to have been as quiet as the subjects of his paintings. Here are 5 important facts about Johannes Vermeer’s life and works.

First fact, Johannes Vermeer was born in 1632 in the city of Delft in the South of Holland. His father was a silk merchant but later began a business as an innkeeper and an art dealer. This family business probably helped young Vermeer get a hands-on artistic education, and it is thought that the young Vermeer may have apprenticed under Carel Fabritius. However, a few years later, his father fell into debt, which explains why Vermeer was largely self-taught.

2. He lived in Delft all his life

Second fact, in 1653, Johannes Vermeer married a Catholic woman and moved into his mother-in-law’s house. There, he would spend the rest of his life working as a painter and die at only 43 years old.

His love for his hometown is evident in Little Street, one of the two landscapes we have by his hand. Little Street shows everyday life in Delft in the 17th century. Already, we can see some of the traits he is most known for, such as his photographic attention to detail.

In 2015, through archival work, the original location of the painting was discovered to be Vlamingstraat at present-day numbers 40 and 42. Almost nothing remains from Vermeer’s time apart from the little passageway in the center of the painting.

3. He is mostly known for genre scenes

Third fact, today only 35 paintings are attributed to Johannes Vermeer, most of them genre scenes. His subjects are mostly women preoccupied with daily activities, like reading a letter or simply pouring milk. Many of the paintings are painted in the same room with a window to the left. One of the main characteristics of his work is his interest in light. Daylight falls naturally on his subjects, sculpting their features with light and shadow. Moreover, his love for detail was enhanced by the use of the camera obscura, a precursor of the camera.

For example, in The Milkmaid, we see a kitchen maid sitting by the window pouring milk. Everything is still in the kitchen; the young woman looks like a statue firmly planted into the earth. The only movement comes from the stream of milk.

Using light and shadow, Vermeer has placed the young woman realistically into the kitchen. Notice how the light dances on her right hand, the one holding the handle of the jug, or the slight white line on the left side of her body separating her from the wall.

4. Vermeer was relatively unknown until the 19th century

Fourth fact, during his lifetime, Vermeer entertained moderate success as a professional painter. He was a member of the local painter’s guild but with his death, his name was forgotten. Until the 19th century, many of his works were thought to be by other artists, until French art critic Théophile Thoré Burger rediscovered him.

5. He painted one of the most famous artworks in history

Fifth fact, Vermeer’s most famous painting is Girl with a Pearl Earring. The “Mona Lisa of the North” is a symbol of a specific genre called tronie, a painting that depicts a so-called human type, an anonymous sitter who sometimes has an exaggerated expression or unusual and flamboyant costume. Vermeer’s mastery over light is once again evident in the softness of the girl’s gaze and the shine of the pearl earring.