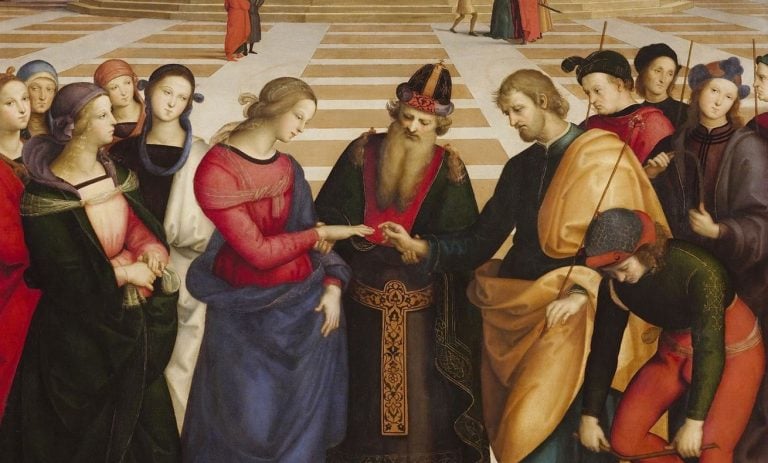 We remember Raphael for grace, balance, and harmony in his art, which made him one of the great masters of the High Renaissance. His work gave him everlasting fame and the title of divino pittore (divine painter), but Raphael also represented a bridge between the Renaissance and Mannerism. You can notice evidence of the change he brought and his connection with the artistic tradition by comparing versions of The Marriage of the Virgin, a theme that he and his teacher, Pietro Perugino, both painted in the same period.

The theme of the Marriage of the Virgin was very common in Renaissance art. It has its origin in one of the apocryphal Gospels, the Protoevangelium of James, but owes its diffusion to the Legenda Aurea, a collection of hagiographies by Jacobus de Voragine that inspired many artists, from Giotto di Bondone to Bernardino Luini.

This episode is about the moment when the priest marries Mary and Joseph in front of the Temple in Jerusalem. When Mary, a young woman who spent most of her life in the Temple, reached a marriageable age she had many suitors; all of them showed up with a branch, but the one Joseph was holding miraculously blossomed one.

In the paintings, you can usually see Mary and the other girls from the Temple on one side, while on the other one you can find Joseph, represented as an old man, and the other suitors.

Fun fact: in some of these paintings you can spot one of the suitors breaking his branch on his knee! He certainly did not take the rejection well.

Every artist, however, portrays this theme in their own way and style, which also represents the time they lived in. This is why it is so interesting to notice the differences between Perugino and Raphael’s interpretation: even if they painted the same theme at the same time, they did it differently because they belonged to two different generations.

Pietro Perugino was one of the most popular Italian painters of the second half of the 15th century. According to Giorgio Vasari, the Umbrian artist began his artistic education studying Piero della Francesca’s greatest works, learning how perspective worked and then completed his studies working at Andrea Verrocchio’s workshop.

He reached the peak of his career at the turn of the century and managed to run two studios, one in Florence and one in Perugia. At the beginning of the 1480s, he painted the Sistine Chapel’s back wall alongside Sandro Botticelli, Domenico Ghirlandaio, and Cosimo Rosselli.

The Marriage of the Virgin by Perugino

Perugino was commissioned to paint The Marriage of the Virgin for the Cappella del Santo Anello in Perugia Cathedral. The artist worked on this painting from 1501 to 1504. Though painted specifically for Perugia Cathedral, the piece was looted in 1797 as part of Napoleon’s suppressions and brought to Caen, Normandy, where it resides today at the Musée des Beaux-Arts de Caen.

We can split Perugino’s painting into two parts, vertically and horizontally. Mary and the women are on the right, in the foreground, while Joseph and the men are on the left. The priest divides the two groups and stands on the central axis of the painting, which grows vertically with the building in the background.

Perugino arranges the characters in static and pacific poses. They seem unperturbed and quiet; even the one suitor who is breaking his stick in anger. The artist didn’t make preparatory sketches of the figures altogether but portrayed them separately; that’s why each one of them seems to exist independently from the others.

Their clothes fall heavy on the figures thanks to the wet effect the artist had learned at Verrocchio’s workshop. They are painted with soft colors that mirror each other in different parts of the painting.

In the upper part of this work, we can see two of the most important features for the architecture of the time: symmetry and perspective. The imposing building with an octagonal plan has two levels. On the first one, there are four prothyrum with round arches and cupolas that alternate with blind arches, while on the second one there are some rectangular windows with an arched tympanum.

In fact, starting with Leon Battista Alberti and Filippo Brunelleschi, in this period artists try to rationalize space through architecture thanks to the revolutionary studies on perspective. We can notice that the structure in Perugino’s painting looks a lot like another of his works, Delivery of the Keys, while the black door resembles the one in The Ideal City, where the unknown artist located the vanishing point.

In Perugino’s The Marriage of the Virgin, the entrance door opens onto a typical Renaissance landscape, with a shaded light and trees that defy gravity. However, one of the features that most remark the difference between Perugino and Raphael is the chopped dome, its absence making the building even more majestic.

Raphael spent his childhood in the culturally rich environment of Urbino in the time of the Court of the Federico da Montefeltro. His father, Giovanni Santi, was a wealthy painter and art critic who raised his child in his studio. From his first years of life, Raphael witnessed the artistic influences of the time, from Piero della Francesca’s paintings and Luciano Laurana’s architecture to the Flemish artist who visited the city.

When he was just 11, he took over the management of the workshop after his father’s sudden death and started becoming very popular. We don’t know the exact date when Raphael and Perugino met for the first time, but when they did, Perugino became a master for Raphael to study and then surpass.

The Marriage of the Virgin by Raphael

Raphael’s version of The Marriage of the Virgin was commissioned by the Albizzini family for their chapel in San Francesco church in Città di Castello, in the province of Perugia. The artist finished the painting in 1504, and today you can find it at the Pinacoteca di Brera in Milan alongside Donato Bramante’s Christ at the Column and Piero della Francesca’s Brera Madonna.

In Raphael’s painting, we can see that the position of the two groups is inverted: the women are on the left side while the men are on the right. They all have the physical features that are very common in Raphael’s style and more generally in Renaissance art; their skin is diaphanous and their faces are perfectly oval.

Their clothes are of brighter and more intense colors, and have more detail – for example, the sleeve of the suitor who is breaking his branch.

But the most significant differences between Perugino and Raphael’s characters are their poses and expressions. Raphael perfectly balances grace and humanity: the human figures seem less static, more natural, and involved in the event of marriage.

The priest’s head bends to the right while he is holding the hands of Mary and Joseph; this slight movement breaks the staticity of the painting without undermining its harmony and balance.

Architecture was one of the greatest passions of the artist, and it’s easy to see it in the reworked version of the building. The 16 sides of the plan smooth the corners of the temple, which is located on a higher staircase.

The building is surrounded by an arched peristyle, on which we can read Raphael’s signature and the year 1504 in Roman numerals as if it was an inscription. This indicates how great was the love that the artist felt for architecture, so much so that he would eventually handle the construction of St. Peter’s Basilica after Bramante’s death.

Furthermore, Raphael deepens the study of the perspective; he adds depth to the composition by emphasizing the parallel squares of the flooring. It is also interesting to see how the cupola perfectly fits into the frame, giving a sense of unity to the whole painting.

When the Pupil Surpasses His Master

The differences between these two artists increased over time. When the major clients lost interest in Perugino, as they thought he couldn’t keep up with the times, the young Raphael gained more and more fame, obtaining prestigious orders from the Vatican and from some of the most influential families of the time.

The encounter with two masters of the time, Leonardo da Vinci and Michelangelo, will irreversibly affect Raphael’s style. On one side, thanks to Da Vinci’s work and studies on physiognomy he will focus more on the expressiveness of his characters; on the other side, he will be inspired by Michelangelo’s emphasis on the human body and its movement.

In his later works, dynamism, balance, and vitality combine into a synthesis between the Renaissance lessons of the past and the contemporary influences. That’s why we can say that Raphael conceived a unique and peculiar style that changed the world of art, pushing it towards the innovation of Mannerism.