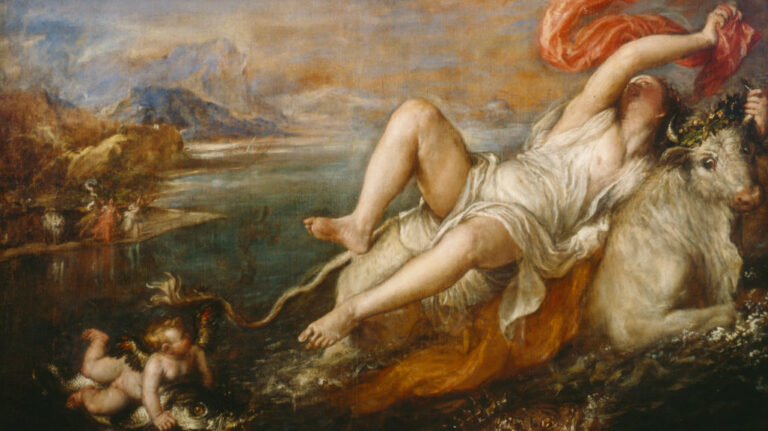 In a series of articles we are meeting each of the seven Poesies, which Titian delivered to Phillip II of Spain in the 1550s and early 1560s. Every painting-poem translated a small section of the Epic poem Metamorphoses, by Roman poet Ovid.

So far, we have encountered the stories of Danaë, Venus and Adonis and Perseus and Andromeda. Today it is time for Europa to have the spotlight.

The best preserved of all of the Poesies is the Rape of Europa. It is another story of Jupiter consummating his desire for a female mortal in a changed form, not gold this time but a bull. Europa and some girlfriends are hanging about on the coast when a beautiful bull (Jupiter in disguise) distracts Europa and eventually lures her out to sea.

"Then he goes further out and carries his prize over the mid-surface of the sea. She is terrified and looks back at the abandoned shore she has been stolen from and her right hand grips a horn, the other his back, her clothes fluttering, winding, behind her in the breeze."

Titian makes Europa's distress very clear and uses the opportunity to revel both in the colors of a sunset and in portraying motion of the waves and fabrics in the scene. In the foreground, you can see that Titian has added a scary sea-monster into his rendition of the myth, possibly to make it a pairing with Perseus and Andromeda. Another shared aspect of the two is the group of concerned observers visible in the background of both paintings.

Next in the series will be Diana and Actaeon. If you haven't read them already here are links to the pieces on Danaë, Venus and Adonis and Perseus and Andromeda.

1. The female nude, which is hard to miss.

Their greatest feat however is the way Titian captures the drama of the stories from Metamorphoses. Each Poesie focuses on the moment just before the climax. They are incredible to behold even if you don't know the myth behind them, captivating and engaging the most astute viewer because of their specificity to the Ovidian poem.

They're marvelous as stand-alone paintings, in pairs, and as a set. Taken as duos, the paintings often mirror each other visually.

As a set, the Poesies offer coherent motifs such as the dogs, the red drapery, and the power play of the gaze.