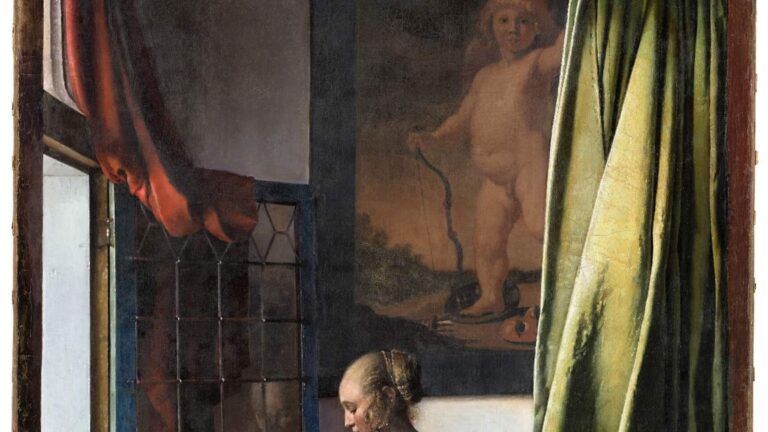 Painting of the Week: Johannes Vermeer, Girl with a Pearl Earring

Back in 2019, the Gemäldegalerie Alte Meister at the Staatliche Kunstsammlungen Dresden (Dresden State Art Collections) announced an exciting new discovery – a hidden image of a Cupid in Vermeer’s Girl Reading a Letter at an Open Window, 1657-1659. After several years of conservation, the museum will finally reveal the painting’s new appearance in the exhibition Johannes Vermeer: On Reflection, to open on September 10, 2021.

On May 7, 2019, the museum gave the public its first glimpse of the partially-uncovered Cupid. At that time, I spoke with Dr. Uta Neidhardt, Senior Curator of Dutch and Flemish Paintings at the Gemäldegalerie Alte Meister, about this “once in a lifetime” discovery. Here is what she had to say.

Johannes Vermeer (1632-1675) was a Dutch Golden Age painter of domestic scenes, which often feature women engaged in everyday activities. Relatively few paintings are attributed to Vermeer, who disappeared into obscurity for many centuries after his death, but he is now among the most famous and coveted old masters.

Scholars have known about the hidden Cupid since 1979, when x-rays and other tests first indicated a painting-within-a-painting underneath the blank background wall. At the time, it seemed that Vermeer had simply decided against including this element and painted it out. This wouldn’t be uncommon. Dr. Neidhardt tells me that Vermeer often extensively modified his compositions as he worked, and there’s evidence that he covered a similar painting-within-a-painting in another scene. Scholars often use x-rays to find the remains of prior compositions (called pentimenti) below the surface.

Restorations on Girl Reading a Letter at an Open window began in 2017 with the primary aim of removing old, discolored varnish. According to Dr. Neidhardt, it was while removing the varnish that conservator Dr. Christoph Schölzel noticed that the paint covering the Cupid had different properties than the rest. The museum ran additional tests, which provided significant clues such as dirt between the Cupid and the paint covering it. Further conservation revealed craquelure (cracks that form on paintings’ surfaces) on the Cupid itself. Both discoveries suggested that the Cupid had been exposed for a significant period of time. In other words, the overpaint must be by a later artist, not Vermeer.

It’s difficult to imagine why somebody would paint over the work of such a great master, but Dr. Neidhardt tells me that this is quite common as well. Later overpaint has been found on works by numerous other masters, including the great Rembrandt, as well as on other Vermeers. There’s no evidence of who modified the Dresden Vermeer or why, but it’s clear that this Cupid hasn’t seen the light of day in centuries. Experts say that the alteration must have occurred several decades after the painting’s completion (around 1660), but before the painting reached Dresden in 1742.

The Gemäldegalerie Alte Meister took the decision to remove the overpaint quite seriously. The museum consulted an advisory committee of Vermeer experts from Dresden, Vienna, Amsterdam, Copenhagen, and Washington D.C. in the process. When I asked about this important decision, Dr. Neidhardt said that the museum pondered both ethical and technical implications of restoration. She said:

After having weighed all arguments and aspects we decided to proceed in a way to come as close to the truth of Vermeer’s original painting (and intention) as possible. That means, after having gotten all the relevant evidence, we no longer considered leaving it with the intact overpaint.

As scholars have mentioned and my scan through his body of work confirmed, maps and paintings on the walls are common in Vermeer’s interiors. Girl Reading a Letter was probably more unusual for Vermeer in its past state than its current one. But I don’t mean to downplay the significance of this change. Even partially-revealed, the Cupid gives the painting a whole different feeling. No longer tranquil and spacious, it has become fuller, more sumptuous, and more complex. Calmness and solitary beauty no longer dominate; the girl is no longer “icon-like”, as Dr. Neidhardt puts it. While viewers could previously project their own emotions and narratives onto the scene, the Cupid now makes it unambiguously romantic. Obviously, the painting must be re-interpreted as a result of this discovery, which Dr. Neidhardt believes will help scholars better understand Vermeer’s entire body of work.

Viewers often feel strongly about any change in the appearance of a well-known masterpiece. Dr. Neidhardt says that public reaction has been overwhelmingly positive, although some viewers have expressed sorrow over the loss of the iconic old image. She credits the museum’s openness about the project with this positive reception. She says that people have enjoyed getting a behind-the-scenes peek at the restoration process through an informative special website, press conference, and exhibition.

Conservation is a complex process that will take at least another year. (It lasted until early 2021.) The overpaint must be carefully scraped off with a scalpel to avoid damaging what lies beneath. Viewers can expect some less dramatic changes as well. Removing the old and darkened varnish will bring the painting’s colors back to life. The edges, which Dr. Neidhardt said were damaged, overpainted, and “in a difficult state”, will receive treatment as well.

Many thanks to Dr. Uta Neidhardt, Senior Curator of Dutch and Flemish Paintings, Gemäldegalerie Alte Meister, Staatliche Kunstsammlungen Dresden, for her lengthy and informative answers to my questions.

If you love Vermeer, we’ve got you covered! Read about his other Girl Reading a Letter (the one in the Rijksmuseum), his landscape View of Delft, his iconic Young Woman with a Water Pitcher, and his most notable forger.

With over 12,000 works of art—including paintings, sculptures, drawings, and prints—the Andrés Blaisten collection is considered the...

Jenna Ransom is a contemporary painter whose work is guided by intuition and imagination. Abstract visions of lively, ambiguous shapes and familiar...

Grove Square Galleries in London is hosting the exhibition Arcadia until February 5th, 2022. Reflecting upon the evolving ideal of a perfect world,...