The Best Of Judith And Holofernes Paintings 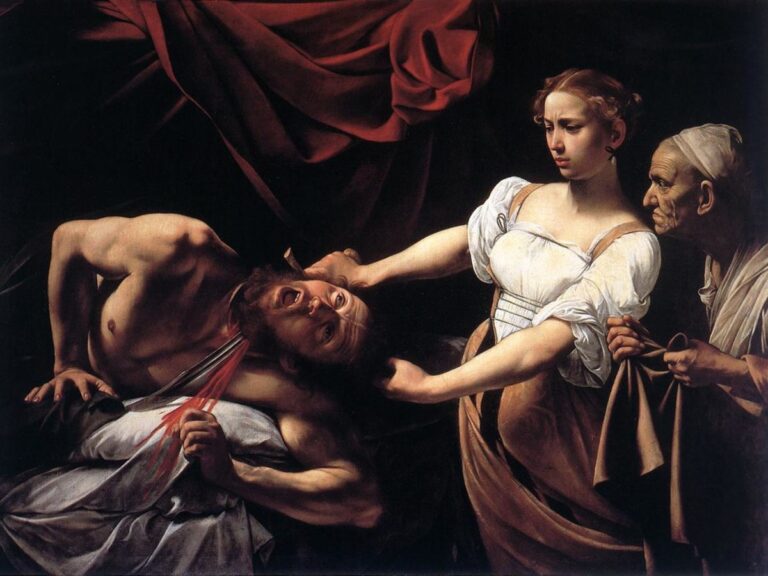 Judith and Holofernes is one of the most feminist themes in the history of art. It is a biblical story written in the apocryphal Book of Judith. Judith was a beautiful widow who was upset with her Jewish countrymen for not trusting God to deliver them from their foreign conquerors. She went with her loyal maid to the camp of the enemy general Holofernes and seduced him. Having gained his trust, she was allowed access to his tent one night as he lied in a drunken stupor. Courageous Judith decapitated him, and took his head back to her fearful countrymen. The Assyrians, having lost their leader, dispersed, and Israel was saved.

Artists in particular epoques loved this subject. Showing proud and victorious women that dominate over men was in fashion in particular times, especially during Secession and Symbolism – you will see yourself, as in this article we present the best of Judith and the head of Holofernes paintings. Enjoy!

1. Sandro Botticelli, The Return of Judith to Bethulia, 1470

In the Return of Judith to Bethulia, Judith became the center of attention and their dominance was showed, too. She and her maid look similar to the young nymphs that are often found in this era of painting. The nymphs were charming, young, girl-like figures that were often found to be the caretakers of fertility. The nymphs were also associated with a group of young women who were found to be violent in nature. They were an odd mixture of grace and yet had the potential to become violent indicated by their female dominance – perfect for copying this features to Judith.

As you may know I love Giorgione (here find out why) so his Judith must be in this article. Giorgione’s work largely determined the development of 16th-century Venetian painting. There are but a few generally accepted, non-controversial works from his hand and one of these is the Hermitage’s Judith. Despite the historical subject, the painting is in fact what is known as a poesie, a type of work created by Giorgione himself and soon widespread in early 16th-century Venetian painting. The lyrical, charming image of Judith herself and the coolness of the morning landscape create the mood of poetical thoughtfulness, which is not disturbed even by the severed head of the enemy commander Holofernes. The world of Giorgione’s paintings is a harmonic whole, even if the story itself is a bit bloody.

3. Lucas Cranach the Elder Judith with the Head of Holofernes, 1530

The virtuous heroine is dressed in an elaborate contemporary costume that is characteristic of Cranach’s courtly mannerism. The painter and his workshop produced several versions of this successful composition, which contrasts the gruesome head and the serene beauty of the biblical heroine.

Caravaggio presented the exact moment described in The Book Of Judith, when Judith gets Holofernes drunk, then seizes his sword and slays him: “Approaching to his bed, she took hold of the hair of his head.” (Judith, 13:7-8). Typically for Caravaggio, he shows the moment of greatest dramatic impact, the moment of the decapitation itself. The figures are set out in a shallow stage, theatrically lit from the side, isolated against the inky, black background. Judith face is a mix of determination and repulsion.

The model for Judith is probably the Roman courtesan Fillide Melandroni, who posed for several other works by Caravaggio around this year; the scene itself, and especially the details of blood and decapitation, were presumably drawn from his observations of the public execution of Beatrice Cenci a few years before.

Artemisia didn’t have an easy life (as you can read here). At the age of 18 he was raped by her tutor who was also her father’s friend. She wasn’t afraid to speak out about it but as a result she was thrust into the middle of a rape case which received considerable publicity and ruined her reputation. Artemisia was also one of a few female artists from those times. This painting created by this brave woman is considered to be a biographical work – Gentileschi drew herself as Judith and her raper Agostino Tassi, as Holofernes. This painting is a pure rage of a hurt woman with wide spurts of blood and the energy of the two women as they perform the act. Powerful image.

This Judith and Holofernes one of the 14 Black Paintings painted by Francisco de Goya between 1819 and 1823. By this time, Goya was in his mid 70s and deeply disillusioned. In mental and physical despair, he painted the private works on the interior walls of his home, known as the The House of the Deaf Man. Judith and Holofernes was likely painted on the first floor, beside the famous Saturn Devouring His Son. There is a theory saying that Goya was bitterly disillusioned over the second restoration of Fernando VII and it is possible that Holofernes represents the Spanish King, whom Goya privately despised.

Judith and Holofernes was quite popular subject from the Middle Ages onwards, as an example of virtue overcoming vice. However, here Judith is depicted as a Viennese society beauty. The model was Adele Bloch-Bauer (yep, the one from the recent movie) whose sensuality and orgasmic expression shocked Vienna. The Viennese could not bring themselves to see this brazen femme fatale, who is clearly taking pleasure in her actions, as the pious Jewish widow how risked her virtue in order to save her city. A far more acceptable solution was to insist that this was a picture of the murderess Salome, despite its being titled on the frame, and for a long time the painting was erroneously known as ‘Salome’.

For this version of Judith Klimt used a different style than in his Judith from 1901. This work leans towards cubism, with all the colorful layers. But natural perspective is still present, contrary to cubist works. The work is also known as Salome, after the stepdaughter of Herod (the one who wanted to kill baby Jesus) who demanded and got the head of John the Baptist.

Artists of the 20th century thrived on blurring the lines of sexual boundaries, anatomy and embodied social identity. Many artists reacted to this by representing the woman in the most natural state, showing her evanescent beauty and occasionally making her appear to be the “Femme Fatale”. Here is no different – von Stuck presenter Judith as a modern woman, naked, wanting to kill Holofernes by herself (without the help of the maid). The red background and intense colors are the echo of Expressionism.