Painting of the Week: Giovanni Panini, Interior of a Picture Gallery with the Collection of Cardinal Silvio Valenti Gonzaga 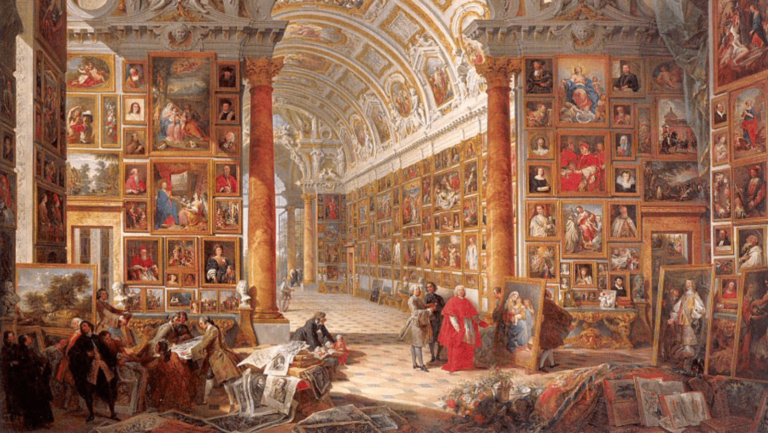 This painting shows a truly spectacular assembly of artworks. Would you be surprised or excited to learn that it was once somebody’s real art collection? All these paintings belonged to Cardinal Silvio Valenti Gonzaga (1690-1756), a collector and clergyman from a powerful Italian family. He commissioned artist Giovanni Paolo Panini to commemorate his prized possessions in this fabulous painting.

It might seem strange to hear that a religious figure amassed such luxuries, but it was actually quite common for much of Western history. Silvio Valenti Gonzaga, in particular, was definitely no stranger to splendor and great art. He was a member of the powerful Gonzaga family, who ruled the Italian city-state of Mantua for many centuries. Although Silvio was been from a less-powerful branch of the family, he shared his illustrious relatives’ traditional taste for art collecting and offices of religious power. Silvio held many important positions at the Vatican, including Secretary of State to Pope Benedict XIV. He used his influence both to collect and to support the causes of art and architecture in Rome. Most importantly, he helped to found the Pinacoteca Capitolina, a significant art museum in Rome.

Wearing a red cardinal’s outfit that makes him easy to identify, Silvio Valenti Gonzaga appears in the center of this painting. He’s surrounded by about two hundred works of art. Though impressive, that was only a quarter of his total collection! Most of it was Italian and Dutch paintings from the Renaissance and Baroque eras, as well as some later copies. For example, several copies of paintings by Raphael appear, like the Madonna della Seggiola right beside Gonzaga. Gonzaga’s nephew and heir, Luigi Valenti Gonzaga (who is also pictured in the painting), sold the collection after Silvio’s death. Since it’s no longer all together, it’s nice that there’s a visual record left for us to enjoy. Some, but not all, of the paintings shown here have been identified, and in 2016, curators in his native Mantua reconstructed some of the collection for a major exhibition. If you understand Italian, you can read the names of some of the works they identified here.

Near the figure of Silvio Valenti Gonzaga is that of the artist, Giovanni Paolo Panini (1691-1765). The Wadsworth Athenaeum, who owns the painting, says on its podcast that he is the figure in dark clothes right behind Gonzaga. Panini was a master of perspective, and he was known for his vedutas, or topographic views of Rome. Panini loved architecture, and you can clearly see that in this painting. He clearly paid close attention to every little detail of the high vaults, beautiful marble columns, and impressive decoration. However, this wasn’t the real spot that Gonzaga kept his paintings. This painting inspired two similar compositions by Panini, Ancient Rome and Modern Rome.

If you like paintings with lots of other paintings inside them, you might enjoy reading about Johan Zoffany’s The Tribuna of the Uffizi.