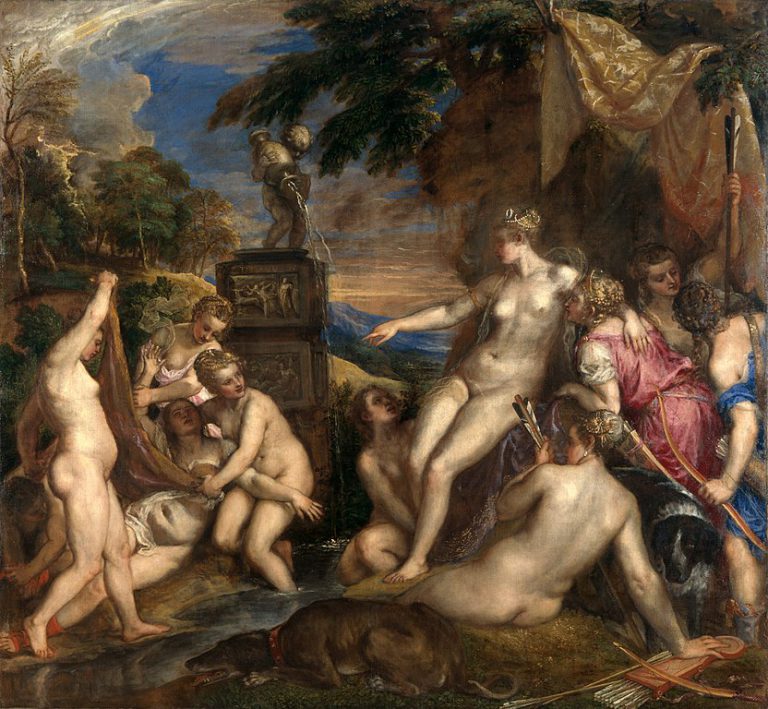 Titian’s sensuous interpretation of Classical myths of love, temptation, and punishment came together for the first time in nearly 500 years, at the National Gallery in London in 2020. The exhibition Titian: Love, Desire, Death was open for just 3 days before it was closed due to a COVID lockdown. Word on the street is that the exhibition could re-open soon. Will it then continue its tour to the Prado in Madrid and The Gardner in Boston? We’ll keep you posted! Before read how Titian’s art may (or should) be revisited.

Art lover Ian Munday had made plans to visit in 2020, but then COVID intervened. Here he ponders his aborted mission to see Titian: Love, Desire, Death. He concludes that every visitor who did make it probably headed straight to the bar for a shot of spirits afterwards!

The exhibition centers on a collection of six paintings by Titian, commissioned by Philip II of Spain at the beginning of his reign. ‘Commission’ is a loose term since the project was funded by a loan from the Fugger bankers of Augsburg. They eventually became fed up with the King’s financial tardiness in repayment and eventually refused to lend to him anymore. Titian didn’t fare too well either as payment was slow. This was Titian’s pension plan, so he was none too happy.

So why did Titian get the commission? Well, at that point he was considered to be the greatest master in Renaissance Europe and he had already painted Philip’s portrait (and was to do so several times more). Titian was the grand old man of the Renaissance, the reigning genius. Philip was a rather callow young man, notorious for his libertine tastes, but he demanded the best in art.

Titian used one of his favorite inspirations for all six paintings – tales from Ovid’s Metamorphosis. In each of these giant canvases, Titian proves his remarkable talent as both artist and storyteller. The mythical scenes are dramatic, enchanting, and atmospheric. Nowadays, as with all the giants of the Renaissance and Baroque eras, we tend to sit back in wonder at the skill in form, palette, perspective, and technique, while sometimes failing to acknowledge the subject. So what is it we are looking at?

For those few people who managed to see the exhibition, I wonder how they felt. Seeing all the paintings in one place must have been dizzying, overwhelming. They gazed upon dazzling and sumptuous color, lush, luminous scenery, and sumptuous fabrics.  But were they also repelled by the ravaged flesh, the violence, the sex, the snarling hunting dogs, the voracious sea monster and that raging, raping bull?

The characterization of the figures is astonishing. There is no doubt these are real women. Even the gods and goddesses show very human faces, filled with shame, guilt, or desperation. But let’s think about who in particular we are seeing here; in fact these women are sex workers. Venice was notorious for its sex trade, and it is known that Titian drew his models from there. So Titian is sending paintings of naked prostitutes to a most holy Catholic leader. Hmm, interesting.

Lying passively on a couch, Danaë is completely naked. She is about to be impregnated by Zeus/Jupiter who manifests himself in the form of a cloud, which is in the process of raining sperm, gold (or is it urine?) upon the unfortunate woman. What the old crone is up to is hard to say, but her grubby old apron hardly serves as an effective prophylactic, as Danaë later gives birth to Perseus.

Here we see a beautifully coiffured Venus waking early in the morning (while her son Cupid still sleeps). Despite being outside, she obviously sleeps in the buff as she is naked but for a thin piece of gauze that covers nothing. After a night of passion with Adonis, Venus tries to prevent him from going hunting. Having taken his pleasure in the night, the post coital Adonis is ‘spent’ and is not interested in sex or love or any such soppy flummery and wants to get off doing manly things like hunting. Look at the intense pleading in Venus’ face – she knows he is going to be gored to death. But no matter how many times Venus pleads, old Adonis is having none of it. If only men would listen.

Or as I like to call it – Bestiality and Bondage! Out on a windy shore, a completely naked Andromeda (but for that tired old bit of gauze again) is trussed up very uncomfortably in chains, resembling a contemporary bondage and S & M session. She seems remarkably passive, almost uninterested in her impending doom (to be eaten by a sea monster) but here comes Perseus to the rescue. This looks more like falling than flying, and at that angle, he’s heading straight into the tempestuous water and the mouth of the beast.

Next we have Diana and Callisto, where the canvas abounds with the naked female forms. It shows the moment Diana discovers that one of her hand-maidens, Callisto, is  pregnant. Callisto has been raped by Zeus (Jupiter) who at the time was dressed as Diana herself – an interesting early reference to non-binary habits. Now from my perspective, poor old Callisto gets a rough deal here. Is there any female solidarity? No there is not. Diana expels her for no longer being a virgin. Also look at Callisto’s face as she is roughly grappled and uncovered – she is utterly distraught. #metoo Callisto.

The Rape of Europa

The most disturbing painting in this collection for me is the last Titian painted for Philip, the Rape of Europa. This is nothing other than a case of bestial rape. Knowing the story of the god pretending to tameness, lulling Europa into a false sense of security, then raping her, makes for very uncomfortable viewing.

However in this work I feel the discomfort is mirrored and felt by Titian himself. He positions Europa where she and the bull are back to back, with the bull travelling at life-injuring speed. Europa looks both physically and emotionally uncomfortable; she is precarious and utterly terrified. A breast is bared, the flimsy robe is wholly disheveled, and her parted legs hint at the violation that is shortly to come.

In letters to the King, Titian refers to Philip as ‘your Catholic majesty’. Of course, he was – Philip II was the greatest Catholic monarch of his age. He was supposed to be enormously pious. He was certainly tyrannically Catholic. Thus he was the force behind the counter-reformation and the brutality of the Inquisition. Philip was so convinced of his own holiness that he even attempted to invade England and topple Elizabeth from the throne in the name of Catholic Christianity. However with that hubristic gesture his purposes failed. According to both Protestant and Catholic believers, God sided with England and the invading fleet of Spain was wrecked by storms.

We can draw a clear art-historical-line from Titian to the 20th century. From Rubens to the works of Anthony Van Dyke (below), to Manet’s Olympia, and so on through history to the feminism of the Guerilla Girls. What a fascinating socio-political story that is to explore!

Politics and art have always been intertwined. Sadly if you look at a vast amount of art in history it was commissioned by tyrants, absolute monarchists, bankers, and corrupt papacies. Titian at least engages with the tragic implications of the Ovid stories. He knows that power is often amoral; that we are often at the mercy of our cruel, irrational leaders, governments, or churches. He knew that the capricious nature of fate and fortune can leave us battered and broken.

However I will leave you with this – the thought of Philip II possibly pleasuring himself over these undoubted masterpieces does not exactly enhance them for me and I shall never look at them in quite the same way again. A swig of fine malt whisky from from my hip flask anyone?

For a detailed investigation of Titian’s Ovid tales, see our series of articles by Isla Phillips.

Since his retirement to Wales Ian has been studying art history and creative writing. He gives guided garden tours at Powis Castle in Welshpool and also assists at the Museum of Modern Art (MOMA) in Machynlleth.