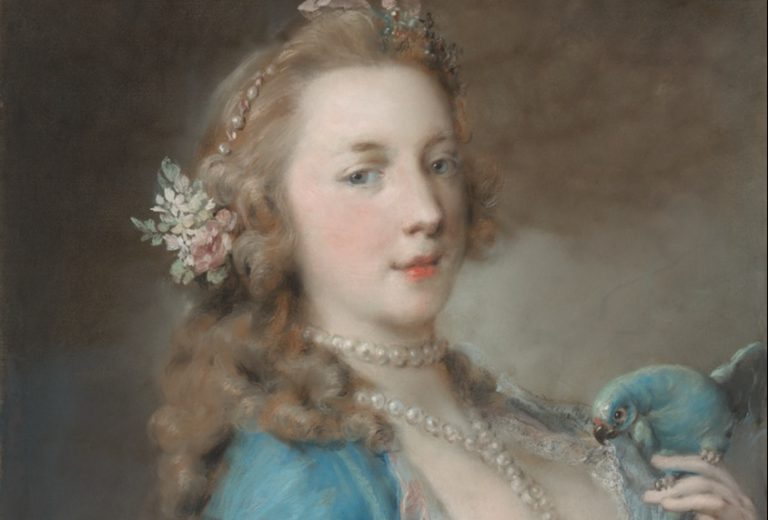 Do you know the great Rococo portraitist Rosalba Carriera? She was one of the most famous painters of the early 18th century. Carriera became known by developing new techniques in miniature painting and pastel portraits. The virtuosity of her art was acknowledged all over Europe, especially amongst the French aristocracy.

Rosalba Carriera was born near Venice in 1673 into a humble family. Her mother taught her the fine and delicate techniques she needed to become a lacemaker. And it was this ability that is one of the major qualities of her art.

Next to as being a famous portraitist, Carriera was also a woman of letters. In fact, she wrote a treatise about the art of pastel and several poems. She also wrote a diary about the society of her time and of her experience as a painter. Thanks to the letters she collected from her correspondence, we now have her testimonies of the relationships with her clients. Other letters give us her views on some aspects of her art.

First Steps into Her Career: Miniatures

Miniature portraits are usually painted on tiny surfaces. They were often created as decorations on objects such as jewelry or snuffboxes. At this time young and well-off men traveled all over Europe on what was called the Grand Tour. And, just as today, they liked to buy lots of souvenirs. The most popular items were snuffboxes with miniature portraits on them. Thus, Rosalba Carriera’s miniature portraits became famous. That is how her career took off. This newly built reputation allowed her to develop a strong customer base.

Carriera was always in search of technological improvements in her art. One important development was painting on ivory instead of the traditional copper plate. By using ivory as a support, the painting appears more precious and delicate, two key characteristics of her work.

Rosalba Carriera is the first artist to be truly internationally renowned for and defined by her pastels. […] Her pastels are noted for their radiant palettes, lustrous velvety tones, and miniaturist’s details.

In 1703, Rosalba Carriera entered Giuseppe Diamantini’s workshop in Venice. At that time oil paints were most common. However, Diamantini taught her to use pastel instead.

There are a few hints that can help you see the difference between an oil painting and a pastel one. Pastel allows the painter to work faster. As a result, it gives a light and spontaneous effect. This is accentuated by the use of light colors. This mix of color and lightness of touch create beautiful transparency effects. The finish is like velvet. Take a look at the Portrait of a Woman with a Mask. You can almost feel the texture of her white dress. The painter has managed to depict the lightness and transparency of the fabric by letting the color of the blue background and the red cloth shine through.

The Art of Portrait

In the 18th century, it was a norm for wealthy people to having their official portraits painted. But these portraits had become more light and intimate. Artists tried to depict the personality of their models. This trait had been absent in the more solemn portraits in oil. Therefore the results were more individualized. Now it was possible to recognize the models. You could even try to guess what kind of personality they had.

Carriera used pastel to create light and intimate effects. She excelled in this new style of portraits which was so popular with the upper classes.

Rosalba Carriera was already recognized as a great artist in Italy. In 1705 she got into the Accademia di San Luca in Rome, along with some of the greatest artists of her time. In addition, during a brief visit to Paris, the Royal Academy of Paintings and Sculpture elected her to join them. That was very remarkable considering that they admitted very few women. In fact, Rosalba Carriera was the only woman at the Academy for 37 years!

The question of the recognition of women artists at the time is therefore interesting. Rosalba Carriera and Elisabeth Vigée Lebrun were some of the rare women artists who had great careers and worked for European courts. That being said, they were only recognized for their portraits. Noble genres such as history painting were reserved for men.

Rosalba Carriera was able to develop her talent to its fullest for two main reasons. Firstly she had an artistic education, something that was rare for women. Secondly, Venice, the city in which she grew up, allowed women to take part in its politics. Some were even allowed to have occupations otherwise considered to be masculine. Women could therefore live freely and actively participate in the artistic life of the city.

In April 1720 Rosalba Carriera arrived in France with her mother and her sisters. Her visit was a huge success. Whilst there, she made pastel portraits very popular among the French aristocrats. Indeed, she became one of their favorite portraitists and received a great number of requests. We learn that she realized around forty portraits during her Parisian stay. Moreover, we read in her correspondence that some of the greatest artists at the time such as Antoine Watteau and Hyacinthe Rigaud enjoyed her company.

Afterwards, she received requests for portraits from some of the finest European courts. She worked for the rulers of Modena and Parma, as well as for Emperor Charles VI in Vienna.

Rosalba Carriera’s work was very much appreciated throughout Europe in the early 18th century. This arose from the delicacy of her touch, her dainty and vaporous style, and the many feminine figures she painted. We can also see the strong influence of her work on some important painters such as Quentin de La Tour.