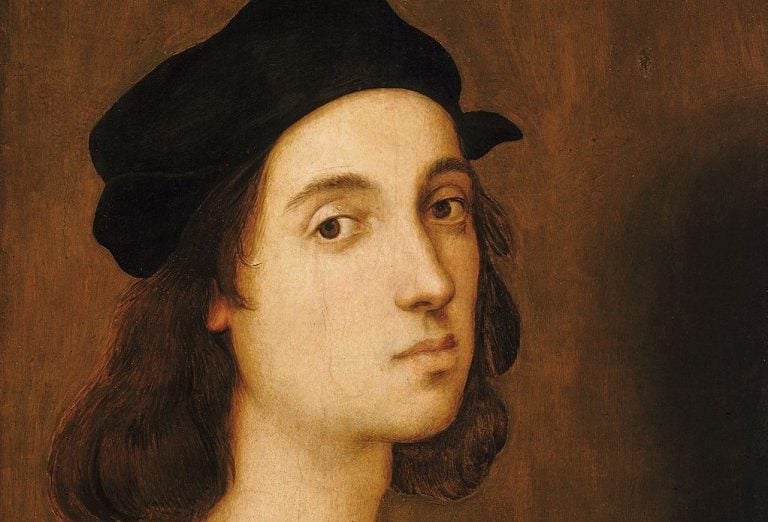 The Story of Raphael’s Lost Portrait of a Young Man

Raffaello Sanzio da Urbino, in English known as Raphael, is famous for the harmony and clarity of form within his visually brilliant paintings. He was sometimes called Il divino, the divine one, for his expert mastery of space and proportion. Let us take a look at one of the great masters of the high Renaissance in Italy.

Born in 1483, it was his father, court painter for the Duke of Urbino, who taught him his trade. At that time, Urbino was considered one of the cultural centers of Italy and a place where artists flourished. But at an early age tragedy struck our young artist. His mother died when he was just eight, and his father died three years later, leaving him orphaned at 11 years old. Undaunted by this early trauma, he became an apprentice to Pietro Perugino in Perugia, and by age 19 he was recognized as a master painter in high demand.

Unlike the tortured artist tales we hear from so many with the title “genius”, Raphael was a charming and pleasant young man. He rubbed shoulders with the aristocracy and was hugely popular with both fee-paying clients and the public alike. By the 19th century his work seemed to fall out of favor, the art world celebrating his contemporaries, Leonardo da Vinci and Michelangelo. But in fact, in his own time, he was very much the favored artist. Art historian Bernard Berenson, writing in 1952, called Raphael the most famous and most loved master of the high Renaissance period.

Raphael was a huge admirer of Leonardo da Vinci, 30 years his senior. Studying this Renaissance master, he grew to understand dynamic movement, sfumato and chiaroscuro. But it was with Michelangelo that a less friendly rivalry was built. Working at the same time, in the same place, bidding to the same patrons, Michelangelo was eight years older than Raphael. And there was certainly envy and angry competition on Michelangelo’s part. But Raphael could give as good as he got. He painted a sulky-faced Michelangelo onto the figure of Heraclitus in The School of Athens, one of his most famous frescoes. Heraclitus was famous for having a temper and a bitter hatred of his rivals.

In 1517 Raphael was appointed Commissioner of Antiquities – effectively putting him in charge of all artistic projects across Rome. Michelangelo could take no more and left for Florence. We talk today of the “Renaissance Man”, meaning a gifted polymath, someone with talents and skills in many areas, and most people think of Leonardo as the original Renaissance Man.

But Raphael could truly wear that crown. He was one of the finest draftsmen in the history of Western art. He designed cartoons (sketches) for tapestry and stained glass. He was a celebrated architect, designing St Peters Basilica, although sadly most of his work was modified or demolished after his death. He also designed the famous Chigi Chapel. In the end, he was running a huge workshop in Rome, possibly the biggest of his day, with 50 students and assistants.

His private life was rather racy. Although he never married, Raphael was known to have had many affairs. He was engaged to marry Maria Bibbenia, the niece of a well-connected and powerful Cardinal, but she died in 1520 before the marriage could take place. It is thought that the great love of his life was Margherita Luti, also known as La Fornarina, the baker’s daughter. In 1520, aged just 37, Raphael fell into a fever. Unconfirmed reports claim this was due to excessive love-making. Raphael was honored with a grand funeral which drew huge crowds. It is thought that a broken-hearted Margherita Luti entered a nunnery.

Raphael changed the face of art. He is truly one of the most influential and naturally gifted painters in the history of art. He left behind an incredible range of paintings that you can discover in museums around the world!