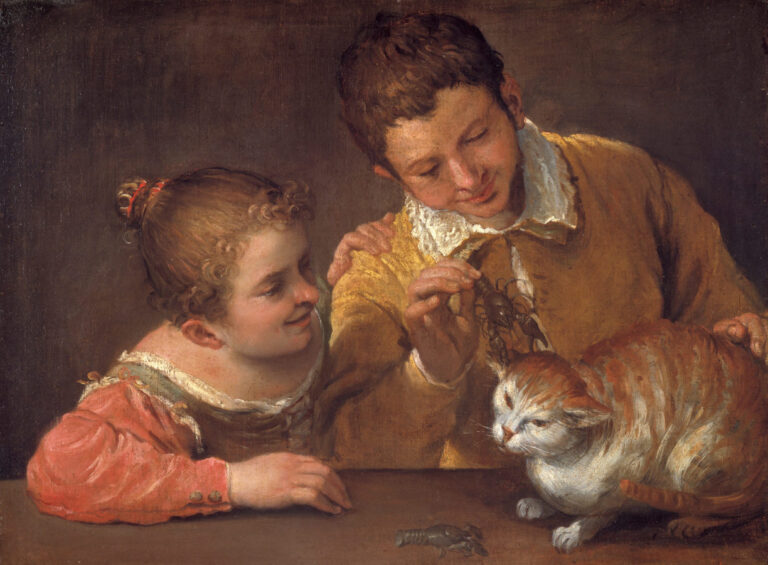 When did Mannierism give way to a new style? Was it with Caravaggio‘s dramatic lighting, or Rubens‘s opulence? Can we distinguish a moment in history, or an artist with whom the new era of painting began? I think that the development of art is a continuous process and a product of many heads (and hands!), but some claim that Annibale Carracci was the inventor of Baroque painting. Let’s see why:

Time for a daily portion of beans

High Renaissance and Mannierism did not show everyday life. They were all about idealized beautiful bodies of Olympus gods and goddesses, or suffering but still hadsome body of Christ, and eternally young Madonnas with Child. There was no place for ugly farmers in their straw hats eating even uglier and smellier everyday beans. Carracci, influenced by Bartolommeo Passerotti, one of Bologna’s chief artists, changed the trend. He wanted to depict the life as it was: rough and grey.
(Everytime I look at this painting I think of Van Gogh’s Potato Eaters. Carracci’s drive to show the real might have appealed to young Vincent).

Here comes yet another scene from everyday life. Matt, earthly colours are applied in thick brushstrokes and the impasto (which stands for texture of the paint applied thickly on canvas) is very rough, too. The subject of butchers and raw meat recurred in art history quite frequently after Carracci: it was taken up by Rembrandt, Chaim Soutine, or Fracis Bacon.

Remember any Renaissance landscapes? Not really? Well, that’s the thing, painters did not paint landscapes on their own, they used them only as lovely backgrounds for portraits or religious scenes. Therefore, the River Landscape is an early example of a ‘pure’ landscape, in which the human presence became incidental (can you spot a tiny oarsman on his boat?). Can we assume that Carracci began a new genre in painting and gave way to such masters as Claude Lorrain and Nicolas Poussin?

Carracci was also a master of frescoes, to the extent that having achieved acclaim in his native Bologna, he was recommended to Farnese family in Rome. He was commissioned to decorate rooms in Farnese palace according to an iconographical programme devised by the librarian of the Farnese family, Fulvio Orsini, which included stories of Ulysses, Perseus, Hercules’ labours, and examples of virtuous behaviour. The choice of Hercules at the Crossroads was a choice between Virtue and Vice described by Xenophon, a classical Greek writer.
At first sight we may say that this painting is not much different from Mannierist scenes depicting Olympus, or Michelangelo’s Sistine Chapel Ceiling from 1508-12: the figures are VERY muscular, their robes, if they wear any (ekhm…), highly stylized. Yet, there is something different: is it a hidden subtle symbolism, Rubens-like body sizes, or bright  colours, and quite a dynamic composition? Or maybe a combination of these?