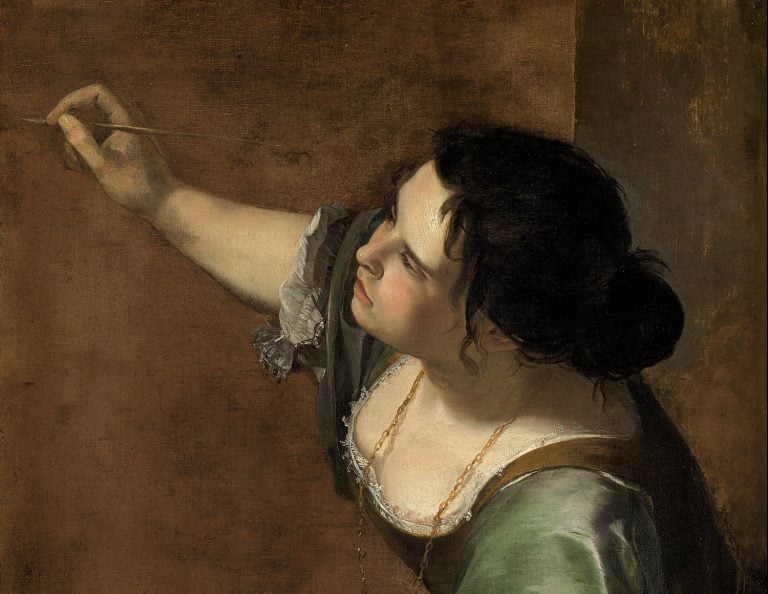 A lot of 16th and 17th century art focuses on mythological tropes and origin stories that are deeply embedded in misogyny and sexual violence. Gendered violence was aestheticized, rape heroized. In accordance with “the male gaze“, these were not paintings made for public collections. They were commissioned for private viewing and voyeuristic pleasure. Angry women, on the other hand, have been seen as dangerous; labeled witches, hysterics, out of control. One such woman who worked to re-write the discourse of narrative art production was Artemisia Gentileschi, a painter who took the prospect of female rage to a whole new level.

One such example of telling history through the male gaze is Rubens’s Rape of the Daughters of Leucippus (c. 1615–1618). The painting recounts the story from Theocritus and Ovid, by which the daughters of King Leucippus were forcibly abducted and wed to the twin brothers Castor and Pollux. The sensuality of the group’s demeanor, along with the tranquility of the sky and the beautiful rolling landscape breezes over the darker reflections within the work, evidently the coercive nature of the attack.

There were few women who managed to make an impact on the Italian art world, and Gentileschi is definitely one of them. Artemisia Gentileschi the painter, was born in Rome in 1593, her father was the Tuscan painter Orazio Gentileschi. She would learn to paint from a young age in his workshop, creating naturalistic paintings which were heavily influenced by the style of Caravaggio.

However, the subject matter of her work differed from that of her contemporaries. Far from passive muses, Gentileschi would portray female subjects displaying both agency and strength in graphic depictions of rage and brutality. She drew from her own encounters with sexual violence and struggles of being a woman in 17th-century Italy.

Artistic training during this period was deeply embedded in a tradition of (predominantly male) academies that imagined the relationship between master and apprentice – father and son. Gentileschi was one of the few female artists privileged to gain access to training through her artist father. But this didn’t mean that she didn’t encounter the deep-seated institutionalized misogyny which prevailed. In an age where the art world was ruled by a male-dominated artistic community and patrons, Gentileschi struggled to be taken seriously as not just a female artist – but an artist in her own right.

And if the struggles of being a female artist weren’t enough, Gentileschi was raped as a young woman by her former teacher – the elder artist and close friend of her father, Agostino Tassi. During a lengthy rape trial, she was physically examined by midwives amongst a throng of male spectators, and torture methods were employed to test if her story would waver under pressure. After a relentless seven-month period, she famously won the rape trial and bought her abuser to justice, a significant landmark in an era when women’s claims were scarcely upheld over that of their male counterparts.

In the wake of the rape trial, Gentileschi produced Judith Slaying Holofernes. The work recounts the biblical tale of the powerful heroine Judith, concurring the enemy of the Israelites Holofernes, as told in the Old Testament. Despite this, the painting is effectively a self-portrait of Gentileschi herself taking bloody revenge upon her rapist.

Gentileschi Is All the Rage

Gentileschi is today considered one of the foremost progressive painters of her generation. The early Italian Baroque painter has made a considerable comeback in recent months. Her Self Portrait (c. 1615–1617) was purchased by the National Gallery for $3.6 million. The painting, which depicts Gentileschi in the guise of Saint Catherine of Alexander, has been touring unconventional institutes throughout the UK. To date, it has traveled to a GP practice in East Yorkshire, an all-girls secondary school in Newcastle, a women’s prison in Surrey and the Glasgow Women’s library. The scheme is a response to the much-needed expansion of arts involvement beyond the metropolitan core, engaging with local communities which are often on the periphery of cultural centers.

Between 2020–2021 the National Gallery in London brought together over 35 of her paintings sourced from private and public collections throughout the world in the show Artemisia. It was the first comprehensive retrospective of the artist’s oeuvre in the UK to date. Having said this, it’s important to note that the purchase increased the number of paintings by women artists in the collection to 2,300 from a mere 21. Furthermore, the £3.4 million purchase is measly when put into the perspective of the price of artwork by some of her respective male contemporaries (a Carravagio work was recently purchased for $165 m). Although signifying a step in the right direction, it demonstrates that women remain significantly under-represented and undervalued in the arts still today.

Gender disparity within the arts sector remains ever so present. It’s necessary to reassess the value that is placed upon art-historically important works which portray violence against women. Just as Gentileschi’s work can be read through her life experiences, much of art-historical works portraying sexual violence from the perspective of men were a product of their cultural climate. Positively, The Independent says that “in today’s art auctions, the ‘male gaze’ is going out of fashion”, signifying a changing landscape.

It appears that the contemporary art market is being slowly transformed by high-profile museum purchases who are looking to re-establish underrepresented names, but evidently, it still has some way to go. Of course, it’s not to say that women chopping a man’s head off is the best way to advocate gender equality. However, it is a decisive step toward reconfiguring dominant narratives within the realm of historical art production.