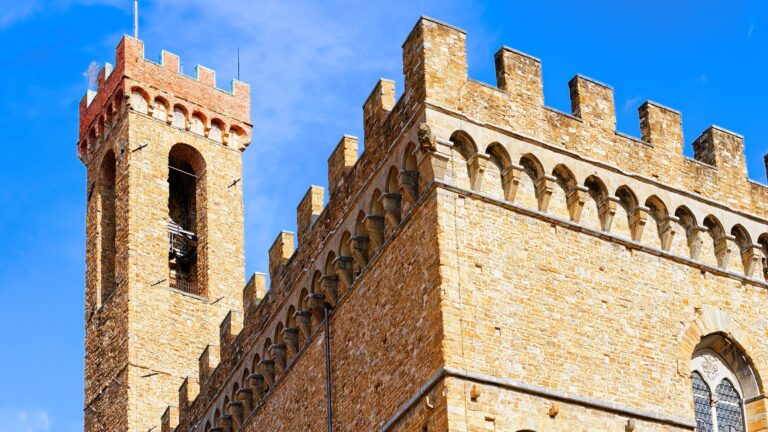 Museo Nazionale del Bargello or the Bargello National Museum is among Florence’s most important museums along with the Uffizi Gallery and the Pitti Palace. It is a beautiful building with a long history that hosts some of Italy’s finest works from important Renaissance masters. This building is just as fascinating and historically relevant as the treasures that it contains within.

History of the Structure

The Bargello is the oldest public building in Florence. It was founded in 1255 to serve as the headquarters for the Capitano del Popolo or the Captain of the People, and later, for the Podestà. This office was intended to safeguard the population and administer justice. The building was also used to house prisoners on death row and for executions.

The Bargello has witnessed some iconic moments of Florentine history including fires, floods, and sieges. It remained the headquarters for the police until 1859 and only became a national museum later in 1865. The new National Museum was inaugurated on the sixth centenary celebration of the birth of Dante Alighieri.

The construction of the Bargello began in 1255. It was originally conceived as a two-floor structure. Unsurprisingly, there have been several renovations over the centuries. The structure is a glorious reminder of Florence’s architectural prowess. It features several vaulted ceilings with ornate crossbeams, intricate corbels and cornices, and gold-leafing as well as beautiful crown glass windows overlooking the beautiful city. The Bargello served as inspiration for the Palazzo Vecchio.

The first, most striking feature of the Bargello is its large courtyard, enveloped by a porch on three sides, with arches that rest on octagonal pillars. There is a grand Gothic staircase in the courtyard that leads to a second-floor balcony and was added in the 15th century. An octagonal well features in the center of the courtyard.

Within this impressive courtyard are several sculptures and reliefs from Palazzo Vecchio, the Boboli Gardens, and other locations. The collection includes works of Bartolomeo Ammannati and Giambologna, to name a few. 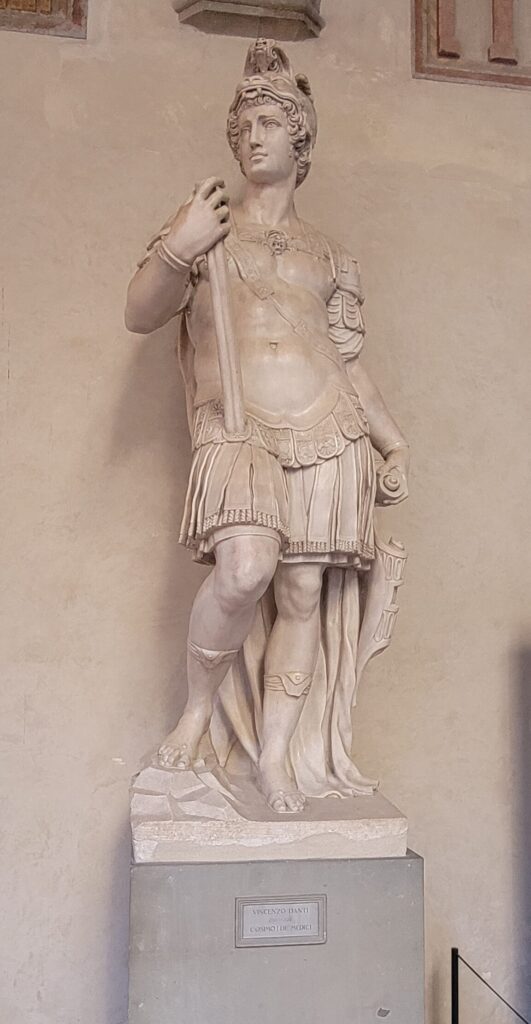 Cosimo I as Augustus

Marble statue depicting Cosimo the Elder int he likeness of Emperor Augustus of the Roman Empire.

Bronze sculpture by sculptor Vincenzo Gemito occupying the a prominent place in the courtyard of the Bargello.

This hall on the ground level is the oldest section of the building and it was originally restored to exhibit weapons, trophies, and flags. However, it suffered devastating damage in the 1966 floods. Thereafter, it was restored again and used to house important works of Michelangelo and his contemporaries. Among these masterpieces is his first Roman sculpture, the enigmatic Bacchus, the Pitti Tondo, the David-Apollo, and the Brutus. This hall also is home to significant works by Benvenuto Cellini, Giambologna, Jacopo Sansovino, and other Tuscan masters of the 16th century. 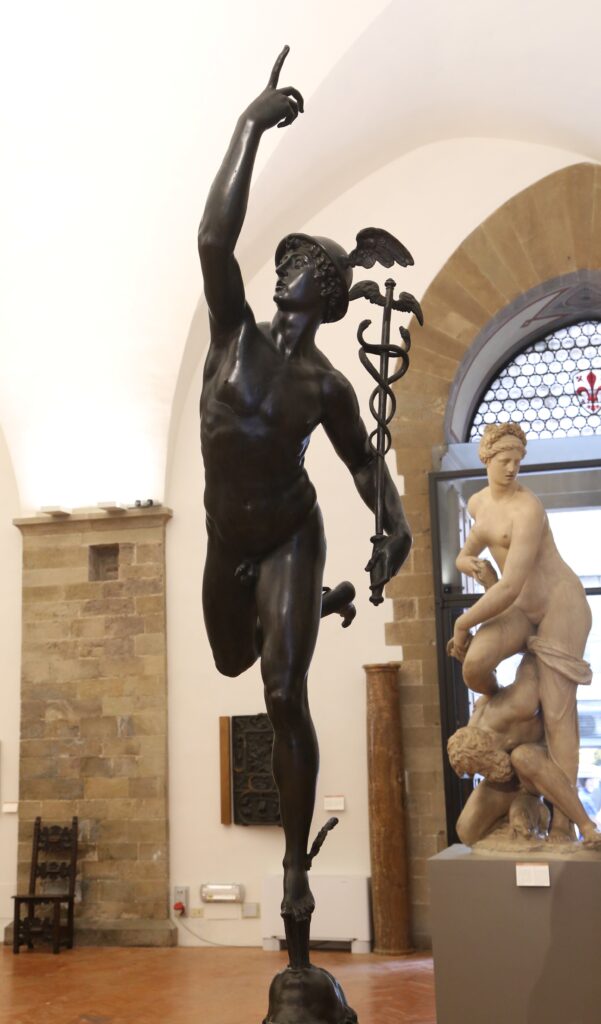 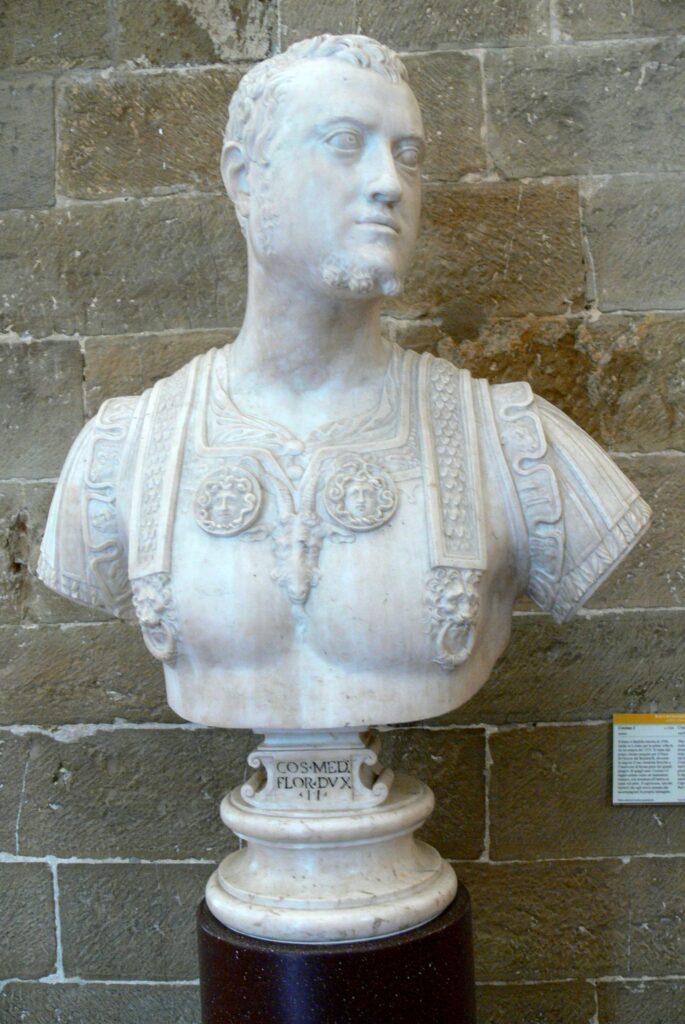 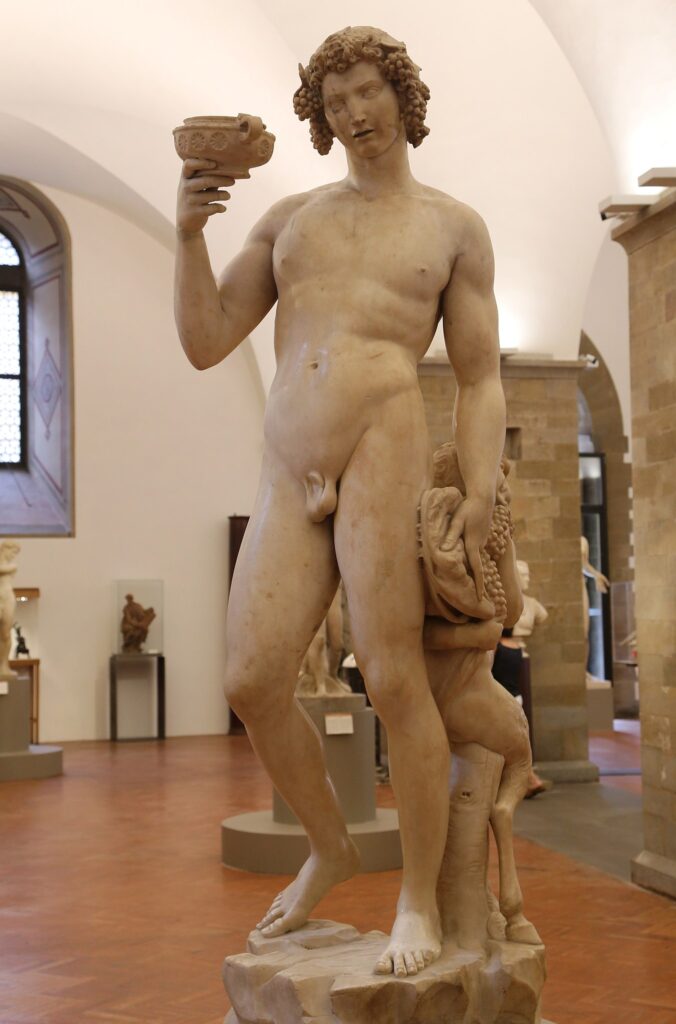 This is one of the four versions of Mercury created by Flemish sculptor, Giambologna.

Bust of Cosimo I

This sculpture was carved by Baccio Bandinelli, a Florentine sculptor who had the favor and patronage for the Medici family.

This enigmatic marble sculpture depicting the Roman God, Bacchus was created by Michelangelo during his early period in Rome.

The Church of Mary Magdalene

The Chapel of Mary Magdalene, initially referred to as Cappella del Podestà, is located on the first floor of the Bargello and was used to hold prisoners on death row before they were executed. This was a place of repentance to offer the condemned criminals a final chance to seek forgiveness and salvation. Frescos showing scenes of redeemed sinners were discovered under a layer of whitewash and have been attributed to the school of Giotto. Vivid scenes of Hell are depicted on the entrance wall and, on the altar wall opposite this, are images of Christ Enthroned in the Celestial Court.

Among the figures of Heaven is a figure that is believed to be a portrait of Dante. The walls linking these two scenes of heaven and hell contain depictions of the lives of John the Baptist and Mary Magdalene.

Applied Arts at the Bargello

Although the Bargello is best known for sculpture, it also features a large collection of decorative and applied arts including Oriental goods, manuscripts, textiles, majolica, ivories, jewels, weapons, carpets, glassware, etc. These artifacts greatly enrich the Bargello collection as the existing Italian collection was largely academic in form of painting or sculpture. The collection started with the Medici family but the majority was donated by connoisseur collectors such as Louis Carrand, Giulio Franchetti, Stefano Bardini, and Frederick Stibbert around the 19th century.

The large hall on the second level of the Bargello was built between 1340 and 1345 with significant restorations in the 19th century. It is an enormous room with high ceilings that dwarf the greatest of works it contains. It was initially the seat of the General Council and now serves as a fitting hall for the works of Donatello, many of his pupils, and other revered sculptors of the 15th century. 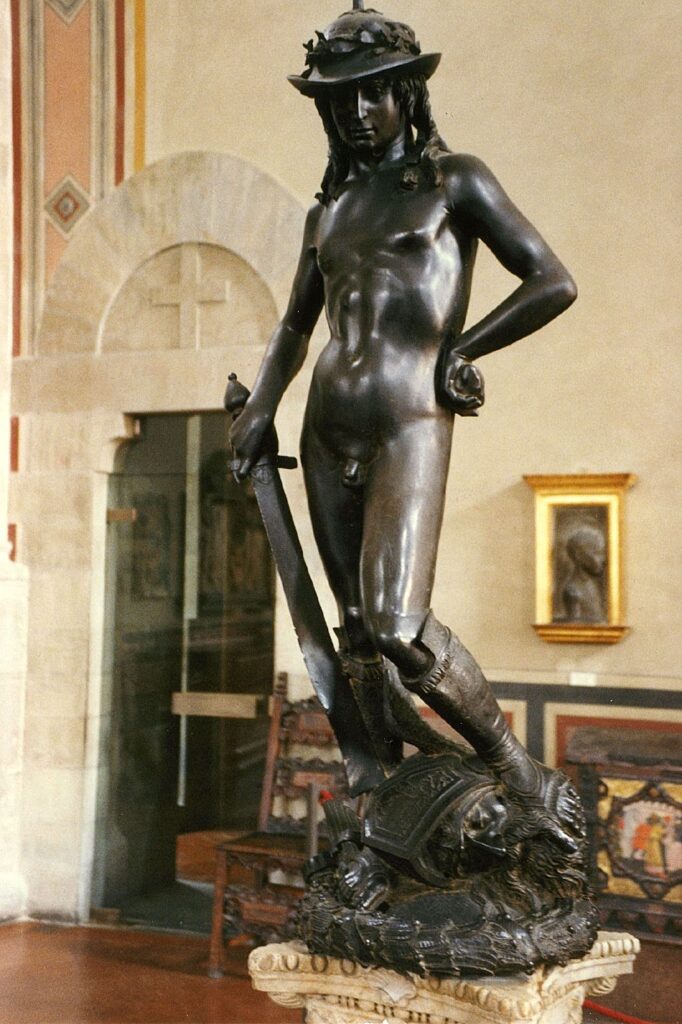 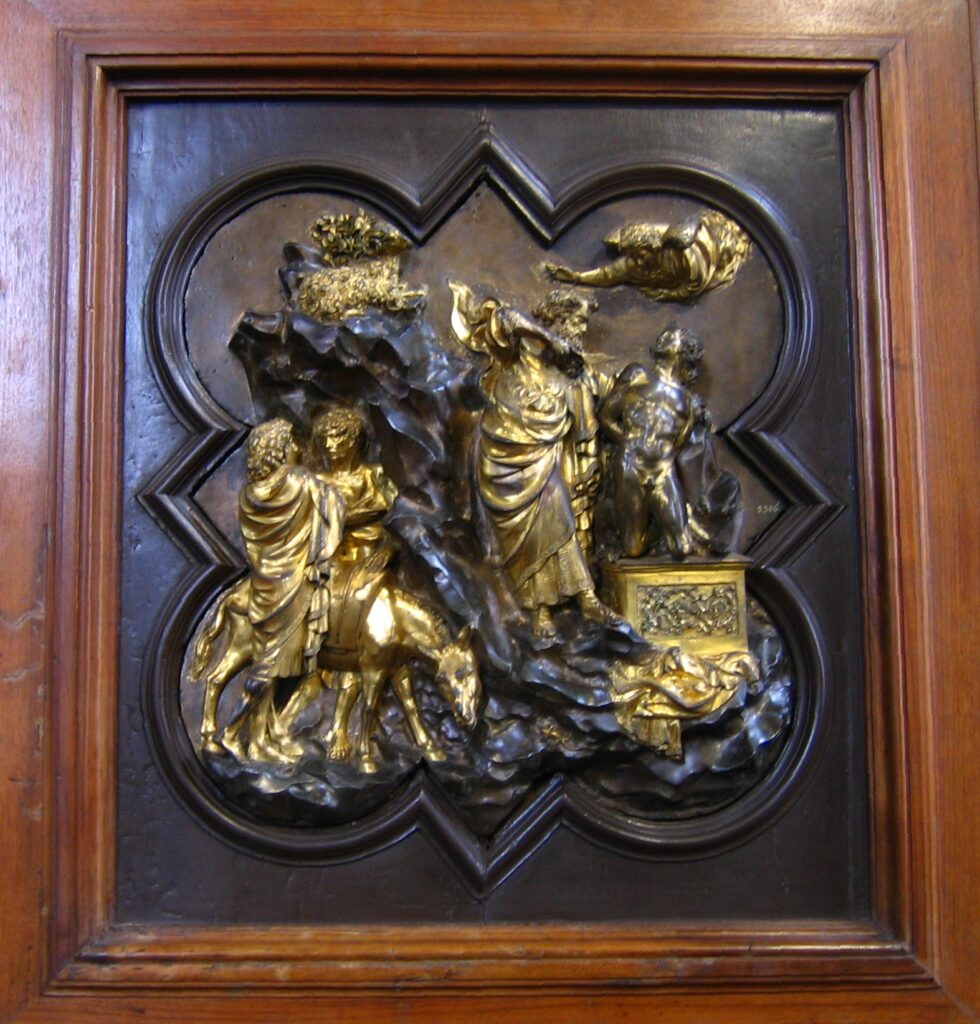 This bronze statute is the work of Donato di Niccolò di Betto Bardi, better known as Donatello. It is one of his two renderings of the Biblical David. Both these works are on display at the Bargello.

This door panel by Lorenzo Ghiberti was submitted for consideration in the competition organized by the Wool Merchants Guild to select an artist to create the north entrance of the Baptistery of San Giovanni in Florence.

Among the masterpieces here are both the marble and bronze versions of Donatello’s David sculptures. The hall also contains his original Marzocco, a heraldic lion of Florence with a paw resting on the emblem of Florence. In addition, there are also works of Desiderio da Settignano and Antonio Rossellino as well as the famous panels of the Sacrifice of Isaac created by Lorenzo Ghiberti and Filippo Brunelleschi in 1401 as submissions to the public competition that was held to win commission of the northern gate at the Baptistery of San Giovanni. 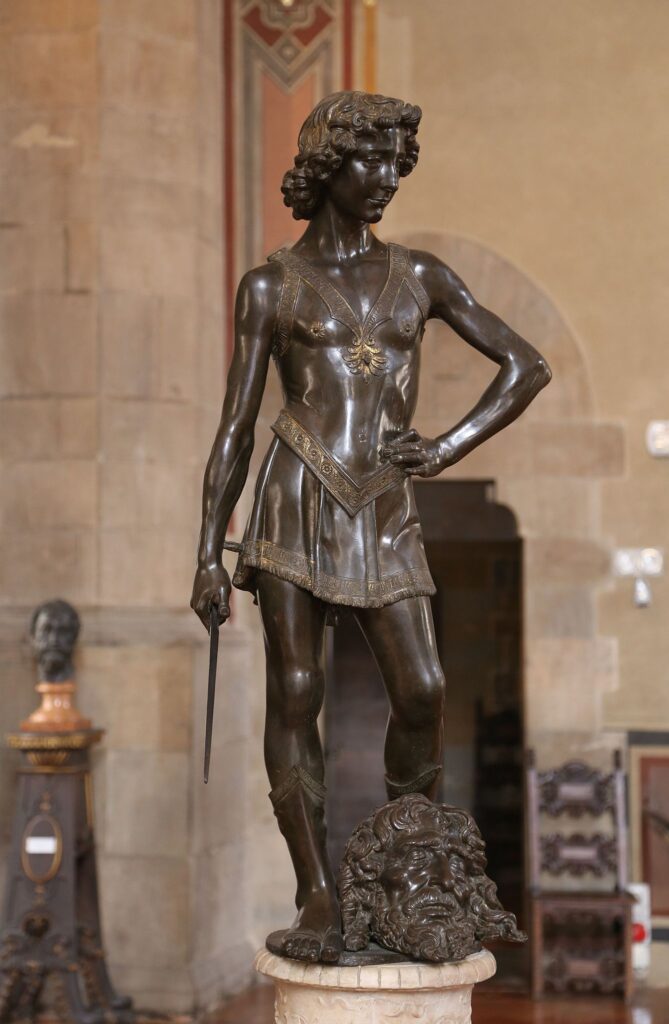 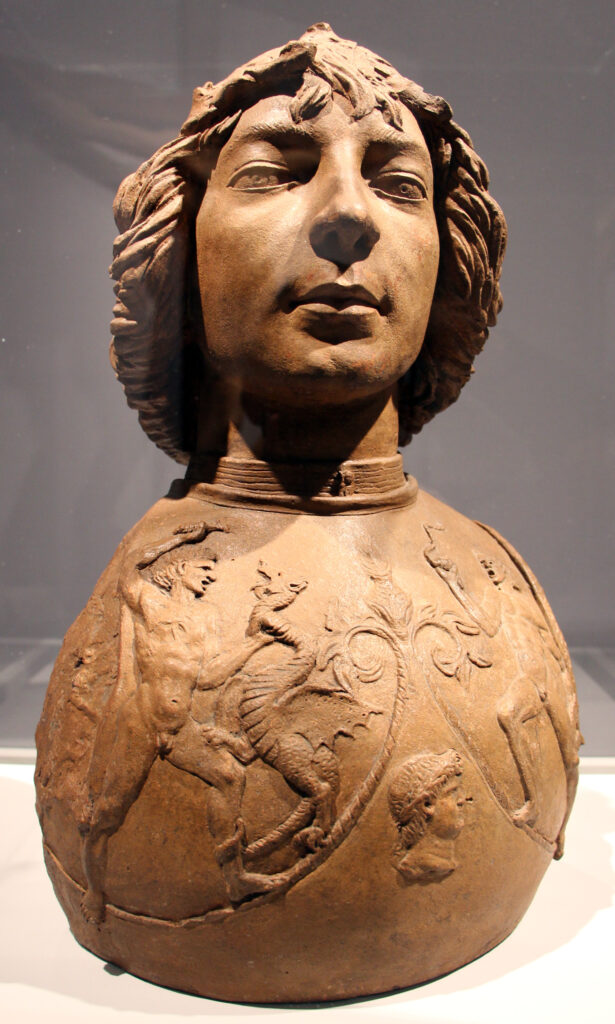 David with the head of Goliath

This bronze sculpture of David was cast by Andrea del Verrocchio as a result of a commission from the Medici family.

This skillful carving of a young warrior is the work of Florentine sculpture, artist and goldsmith, Antonio del Pollaiolo.

The Bargello is also home to the bronze David as well as the intriguing Dama col Mazzolino by Andrea di Michele di Francesco de’ Cioni, better known by the name Verrocchio. There are also other statuary and bas-reliefs of mid-15th century masters such as Antonio del Pollaiolo, Mino da Fiesole, Benedetto da Maiano, and Antonio Rossellino.

Two rooms on the second floor are dedicated to distinctive glazed terracotta sculptures from the prominent Della Robbia family. This technique of polychrome glazed ceramic was devised by Luca Della Robbia, and was continued by his nephew, Andrea Della Robbia. Andrea’s son, Giovanni Della Robbia, continued the family tradition and took it to new heights. So significant is their legacy in this realm, that such works of maiolica came to be known as “robbiane”. The Bargello is home to a large collection of these works that were often rendered in blue and white and depicted a variety of subjects. 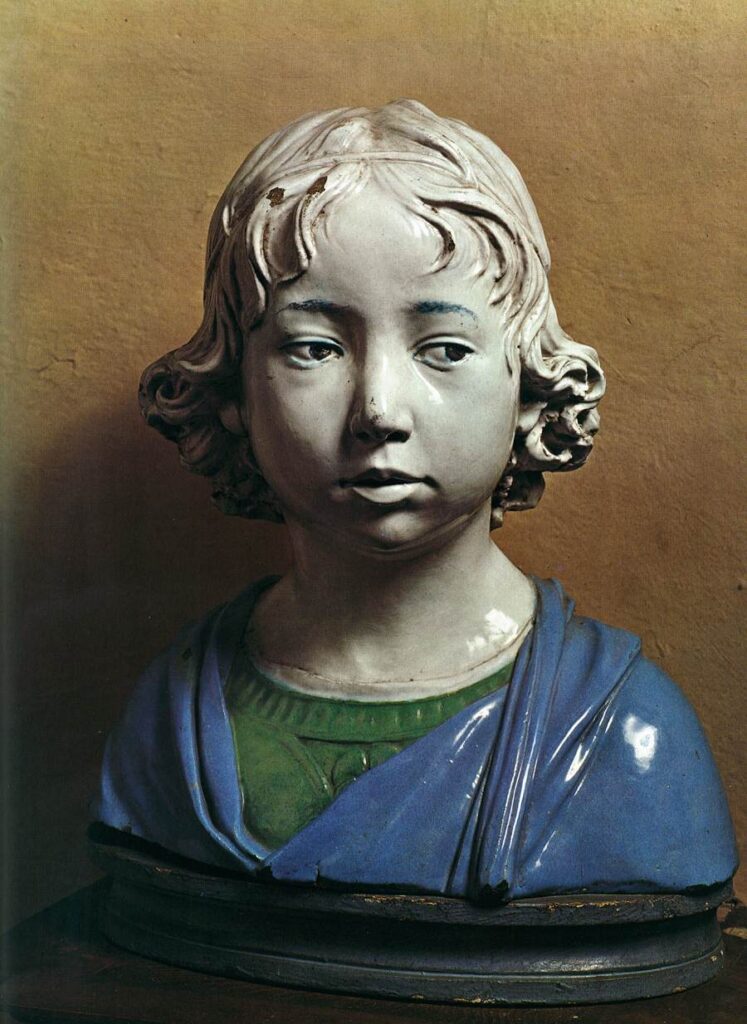 This relief, called Madonna delle Cappuccine was in the first panel on the left of the bronze doors of the Old Sacristy in the Florence Cathedral. The modelling of the central group is related to the Madonna del Roseto.
ca. 1450, Bargello National Museum, Florence, Italy. Web Gallery of Art.

Bust of a Boy

It is speculated that this work is an idealised portrait of the son of Lorenzo il Magnifico, Pietro lo Sfortunato.

Madonna and Child between Two Angels

This relief, known as Madonna delle Cappuccine, originally featured on the bronze doors of the Old Sacristy in the Duomo of Florence.

Because the Palazzo Pitti and the Uffizi Gallery are usually the first to draw tourists to the historical city of Florence, the Bargello is unfairly overlooked. The former barracks in its rich Italian Gothic style has a long history and inspiring collection that are worthy of a dedicated visit.