The Story Behind The Tribuna Of The Uffizi By Johan Zoffany 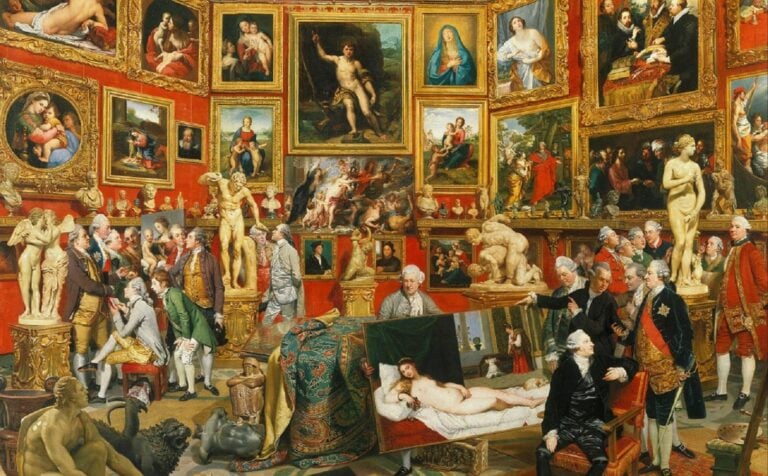 Johan Zoffany (1733-1810)  was a German-born neoclassical painter. In autumn 1760 he moved to England and started to work for a clockmaker, Stephen Rimbault (He was painting vignettes for his clocks). He was noticed luckily by the royal family and since 1764 he has been enjoying the patronage of King George III and Queen Charlotte. Among others, he created their family portrait titled George III, Queen Charlotte and their Six Eldest Children (1770). But today, we won’t talk about royal portraits. We want to tell you the story behind the most famous masterpiece The Tribuna of the Uffizi by Johan Zoffany.

The painter Johan Zoffany was an adventurous man. He wanted to see the world and leave England with James Cook’s expedition on the ship Resolution. It was the second famous traveler’s exploration cruise and this time the Southern Sea was the main goal. The painters were to sketch discoveries and daily life of the whole expedition. Unfortunately, the organizers decided no to take some people with them, including artists, because there was not enough space on the ship to take the right amount of supplies for everybody. Zoffany was totally disappointed… he has already awakened the desire to travel and didn’t want to give up this idea. Therefore, in return, he decided to go to Italy, where he was studying painting in his youth. But he didn’t go there without any reason. His patroness – Queen Charlotte, who has never been abroad, asked him to paint the famous treasury of masterpieces of the great arts that was The Tribuna room in the Uffizi Gallery. These kind of places were very attractive to many artists and students, also they were often the main goal of traveling aristocracy. The Tribuna room was one of “must see” points on European culture map. So, it wasn’t uncommon that the Queen wanted to see it so much and she was able to thanks to Zoffany.

In this place, we have to mention that Johann, like a lot of artists, loved women and even though he was married, he came into a closer relation with lots of them. Someday Mrs. Zoffany had enough of her husband’s romances and returned to native Germany leaving him alone in England. One of the artist’s mistresses was a fourteen-year-old girl, whose parents threw her out of the house, when they found out that their daughter is pregnant with the married painter. According to the rumor, she hid in desperation on the ship, which was traveling to Italy with Zoffany. One is certain- after arriving to Florence, the artist divorced his first wife and remarried the young mother of his child. They were living together and raising a son.

Afte stabilizing his life situation in a new city, the artist finally started to create his masterpiece. He was spending a lot of hours painting the north-east section of the Tribuna room. On the painting, he introduced not only artworks from this place, but also other pieces from elsewhere in the Medici collection, for example: Raphael’s Madonna della Sedia or The Niccolini-Cowper Madonna.

But first of all, in the Zoffany’s piece, we can notice a lot of masterpieces, including Venus of Urbino by Titian (in the center as the collection’s pride), Venus with a Satyr and Cupids by Annibale Carracci (left wall), Madonna and Child by Correggio (left wall), Pope Leo X with Cardinals Giulio de’ Medici and Luigi de’ Rossi by Raphael (right wall), The Four Philosophers by Rubens (right wall)… and many Ancient Roman statues and busts.

I wonder how many artworks can you recognize?

The painting was well received in England. The members of the Royal Art Academy were delighted and even wanted to reward Johan Zoffany with a lifetime annual scholarship ranging from 700 to a 1000 pounds. Unfortunately, King George III was opposed to this proposal claiming that the painter extended his stay in Italy at the cost of the English crown. According to him, Zoffany wasted a lot of time painting portraits of the Austrian emperor and his family while he should have been concentrated on creating The Tribuna of the Uffizi. The artist didn’t agree with this accusation explaining that he even refused to move to Vienna at the invitation of King George II and to received Baron’s title, because he was always faithful to the English crown. We don’t know what happened later and how many Johann was paid in the end and whether he got any scholarship. Whatever, ten years after hanging the masterpiece in the Kew House, the famous madness of George III was becoming more and more intense. Once, the king tried to destroy the artwork in a rage. So, it was removed from the royal residence for its protection. Many years have passed since then and now we can admire this great masterpiece in the Royal Collection in Windsor Castle.

Unfortunately, behind this story, there is also a personal tragedy of Zoffany. During his work on The Tribuna of the Uffizi, he lost his little son. The child fell down the stairs and three weeks later died of brain damage. It completely broke the painter emotionally. He couldn’t accept what happened and since that time he became increasingly depressed. Of course, it had a bad influence on his work and after returning to England, he wasn’t the same artist – creative, productive and full of life. Something changed in him. Johan Zoffany suffered from this tragedy till his death in 1810 at the age of 77.

Art historian; she wishes she could go to the exhibition of modern art with Marcel Duchamp, take part in Tadeusz Kantor's happening or ...drink a damn good coffee with Agent Cooper.