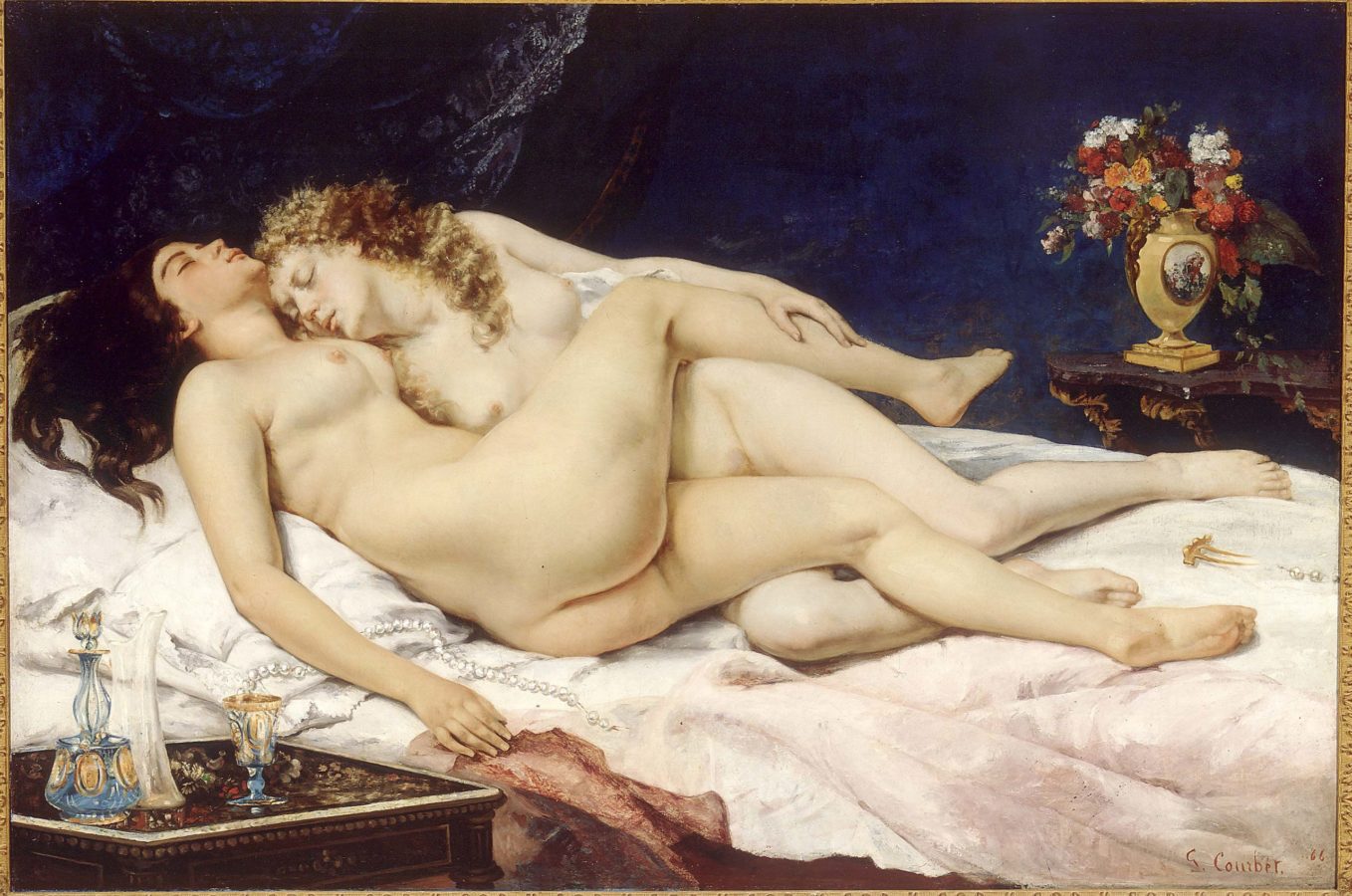 Ever wondered about the presence of homosexuality in art? Today we’ll travel a bit in time to see how art has treated the subject of lesbianism.

Of course, there aren’t as many representations of homosexuals as of heterosexuals, since for many centuries they were repressed by their societies (and still are in many places in the world nowadays). However, as one can probably imagine, male homosexuality was definitely more present in art history – probably because art was dominated by men, many of whom were homosexual or bisexual. Female homosexuality was for many a mystery, a dangerous topic to explore. Still, however, if any lesbian erotica was made, they were usually made by men and for men…

The Ancient Greeks were advanced in many aspects, one of them being the treatment of homosexuality, which for them was a natural part of life. And so were its representations in decorative arts, as we can see from this decoration of a vessel. Did it have any particular function? Most probably yes. Any suggestions anyone?

A Long Time After That

The Middle Ages and the Renaissance seem to have avoided the topic, or treated it in a very subtle way. I didn’t find any significant pieces, although many myths illustrated by Peter Paul Rubens or Titian can be interpreted as carrying lesbian undertones. Similar phenomena happened in the 18th century; we can find some delicate hints in Francois Boucher‘s idyllic paintings for example.
I’ll focus, however, on more direct representations that resurfaced in the arts during the 19th century, starting of course with my favorite rebel: Gustave Courbet. This guy just loved to shock – remember the Origin of The World? He lived on controversy, and depicting a pair of women sharing an embrace obviously caused a lot of clamor: Le Sommeil was not allowed to be exhibited publicly until 1988.

Intimate Moments Superior to Everything

We cannot miss Henri de Toulouse-Lautrec and his studies of prostitutes. Lautrec, as a purchaser of their services himself, was accepted by the prostitutes as a fellow outcast. Sometimes he would pack up and move into a brothel for days or months on end. He was permitted to wander about and sketch freely on his own initiative, or even on the commission to the brothels. He grew close to his models, which also allowed him to study them during their intimate moments. He played games with them, brought them presents, and accompanied them to his studio, restaurants, circuses, or theaters during their time off. He once described a scene of two women lying together on a couch: “This is superior to everything. Nothing can compare to something so simple.”

A Surprise From Eastern Europe

Jan Ciągliński was a Polish painter who lived and worked in the Russian Empire. He was one of the first exponents of Impressionism in Russia, which could be considered rather untypical for a professor at the Fine Arts Academy propagating Academism. However, as this painting shows, Ciągliński was a forward-thinking person who could not be restrained within the conventions of strict Russian society.

Too Sexy to Show It Under the Real Name

Auguste Rodin created a number of pieces on the theme of lesbianism, which in his time was considered a mental disorder. Showing the sexual activities of women would serve to shock the audience in order to highlight the dangerous nature of female sexuality. Although many of Rodin’s pieces were admired, this one was never exhibited during his lifetime due to its “blatant homoeroticism”. The title is inspired by Dante’s Divine Comedy, a big reference for Rodin and his contemporaries, also in terms of sexual mores.

As you might have noticed, all these works are made by men. There are so few quality works made by women themselves on this topic. The reason for it is probably the fact that the lesbian women had virtually no chance to express themselves in public in general. Instead, they were repressed, silenced, and erased from the common space.