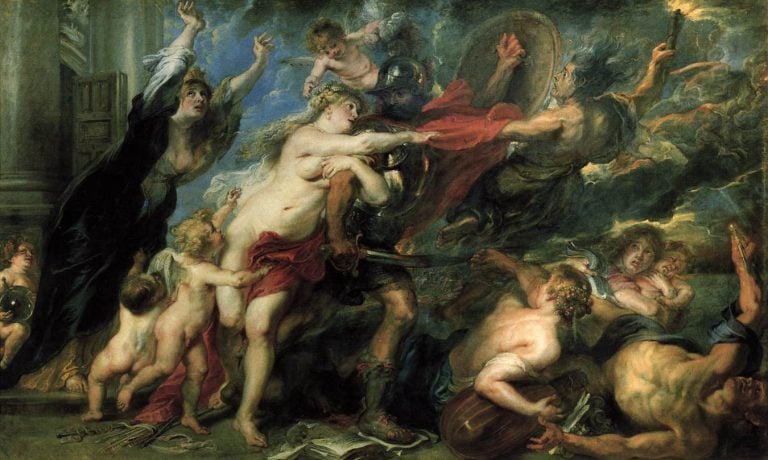 Peter Paul Rubens is synonymous with Flemish Baroque. His dynamic yet sensuous style made him the most popular artist of his time, running a large workshop in Antwerp that catered to royals and nobles throughout Europe. He is best known for his mythological and religious paintings, every scene infused with drama.

The tragic story of Samson and Delilah comes from the Old Testament. Samson, a Jewish hero, was blessed by god with superhuman strength, which he used to fight the Philistines. To extract revenge on him, the Philistine leaders bribed Samson’s lover, Delilah, to learn the secret of his strength. After many attempts, he finally revealed to her that his strength rested in the length of his hair. So, one night while he was sleeping, Delilah’s accomplice cut Samson’s hair while solders waited outside to arrest him.

This moment of betrayal is what Rubens portrays here. Samson rests peacefully on Delilah’s lap. His huge body, now that he is asleep, seems vulnerable. The sensual young woman disheveled and half-naked after making love looks down on him while an accomplice snips away at Samson’s hair.

While Rubens is mostly accurate to the biblical text, he added the figure of old woman behind Delilah to show that one day she will lose the beauty that seduced Samson and spelled his demise.

Rubens spent 8 years in Italy studying the Italian masters and Greco-Roman sculpture. For example, he was fascinated with the works of Michelangelo and Caravaggio. In this piece, we see the rich musculature of the Torso Belvedere in the body of Samson, as well as an echo of Michelangelo’s Night in the figure of Delilah. Caravaggio’s dramatic lighting envelops the scene.

The Elevation of the Cross

This huge altar piece, measuring 4,5 m in height, used to hang in the now destroyed Church of St. Walpurga in Antwerp. Nowadays, it sits in the Cathedral of Our Lady in the same city.

It is a triptych, which means the composition is arranged in three panels. On the central panel we see the main subject. The cross forms a diagonal axis spanning the canvas from the upper left to the lower right as the nine men struggle to rise it.  We can almost hear them scream as they put in all their force. That is to say, this is a dramatic moment, a scene filled with action, as the cross is not raised yet. We cannot help but wonder, will they pull through?

Rubens reminds us of the human side of Jesus as he looks up in resignation. We can also see the blood trailing down his hands.

On the side panels there are some complimentary episodes. To the left, John and Mary watch the event of the central panel with quiet grief, in contrast to the crying women just below them. On the right, Roman soldiers are overseeing the whole operation. In the back, some men are crucifying the two thieves. Rubens united the scenes in the three panels through the landscape and the sky above.

Notice that the event has been portrayed with great religious accuracy, as it is told in the gospels. The theological earthquake caused by Luther’s Reformation some years before the painting urged the Catholic church to respond with is known today as the Counter Reformation. Historical accuracy of biblical events were of the orders given to artists.

The Rape of the Daughters of Leucippus

Along with his religious scenes Rubens became famous for, he painted mythological subjects as well. According to the Greek myth, Phoebe and Hilaera, the daughters of Leucippus of Messenia, were priestesses of Athena and Artemis. They were engaged to be married. Castor and Pollux, sons of Zeus and brothers to Helen of Troy, fell in love with the sisters and decided to abduct them. The fiancés of the two girls followed the abductors but in the ensuing fight Castor was killed. Zeus then made Pollux immortal. He accepted his father’s gift on one condition: that he share it with Castor. From then on, each brother spent one day in Hades.

On the canvas, we see the abduction of the girls; that’s what rape means as a term in art history. Faithful to Baroque ideals, the scene is filled with drama and emotion. Despite the intense gestures the painting looks harmonious to the eye. Two diagonal axis span the piece. The first starts from the upper left with the head of the brown horse, continues on the thigh of one girl and ends in the right hand of the other. The second axis begins in the lower right with the foot of the brown horse, follows the body of the princess and ends on her upraised hand.

In 1621 Maria de Medici, the widow of Henry IV of France, commissioned a cycle of 24 four paintings. The subject of the paintings was Maria de Medici’s struggles and triumphs in life.

The most famous of the 24 is the one showing Maria’s Disembarkation at Marseilles. It safe to say there has never been a more majestic scene of someone descending from a ship. Maria and her entourage arrive in France from Italy to meet her future husband. She is greeted by the allegorical figure of France, the woman wearing the fleur de lis cape.

While the upper half of the painting seems a bit static, that is not the case in the lower half. In the realm of sea, nereids and tritons ensure Maria de Medici’s safe arrival by tightening the ropes that keep the ship at port.

The Judgement of Paris

This story from Greek mythology explains the beginnings of the Trojan War. Paris, prince of Troy and son to King Priam, holds a golden apple, the infamous apple of discord, to hand to the most beautiful goddess. Three of them stand before him. Even though they are naked, we can still recognize them. Near the tree stands Athena, behind her there is her shield and perched upon a branch stands her sacred animal, the owl. In the middle there is Venus, accompanied by a cupid. Next to her, the queen of the gods, Juno along with her animal, a peacock. All three of them tried to entice Paris. Athena offered him wisdom and strength, Juno wealth and power. However, Venus’ gift was irresistible. She offered him the most beautiful woman in the world, Helen of Sparta.

On the canvas, we see Paris as he announced the winner, giving the apple to Venus. She clutches her cloak near her breast as if surprised by the outcome. Behind Paris stands the messenger of the gods, Hermes, who brought the three women to be judged. Rubens creates a bucolic idyll, without the drama of previous works. On the contrary, the painting is imbued with a quiet sensuality.

The Consequences of War

Mars is heading to war, egged on by the Fury of discord, Alecto. Venus, Mars’s lover tries to stop him by grabbing him by the arm. Behind the goddess, the allegorical figure of Europe is desperate, flying her hands up in the sky almost on the verge of crying. Mars looks at Venus, but his powerful pose is unstoppable. His sword is already red with blood and he will soon trample on the figures that lay on the ground, two personifications of the arts and right behind them a terrified mother and child.

With great energy and drama, Rubens lays out the pain and suffering caused by war. He juxtaposes the beauty of Venus, representing peace, with the grotesque figure of Alecto. The painting was commissioned on the events of the Thirty Years War.