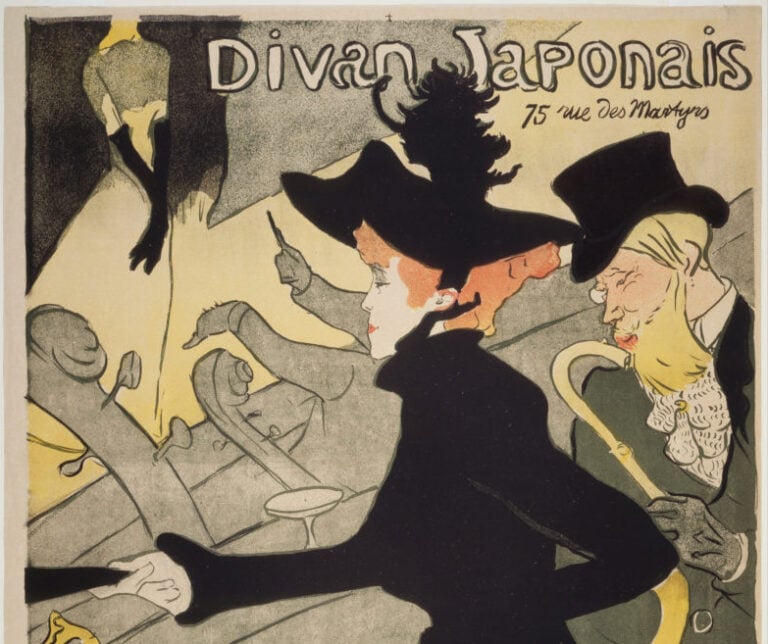 Divan Japonais is a lithograph poster by Henri de Toulouse-Lautrec which was an ad for a café-chantant of this exact name. The poster is like a movie still depicting three celebrities from the Montmartre of Toulouse-Lautrec’s time: dancer Jane Avril wearing black and sitting in the audience, the writer, critic and founder of the literary journal Revue wagnérienne Édouard Dujardin, and performing star of the club, Yvette Guilbert.

Though her face is not included in the poster, she is recognizable by her tall, thin frame and long black gloves, which were her signature accessory.

In 1893, Divan Japonais has been newly redecorated with fashionable Japanese motifs and lanterns. Its owner, Édouard Fournier, commissioned this poster—depicting singers, dancers, and patrons—from Toulouse-Lautrec to attract customers to the opening of his nightclub.

The bold composition, with the figures dominating the center of the picture, the simplification of outlines, and the combination of areas of flat color are all typical of the innovative posters that were developed by Toulouse-Lautrec. The poster also demonstrates the influence of the Japanese woodblock prints of which he was a great admirer.

Toulouse-Lautrec was the master of lithography. Lithographed posters proliferated during the 1890s due to technical advances in color printing and the relaxation of laws restricting the placement of posters. Dance halls, café-concerts, and festive street life invigorated nighttime activities. Toulouse-Lautrec’s brilliant posters, made as advertisements, captured the vibrant appeal of the prosperous Belle Époque.