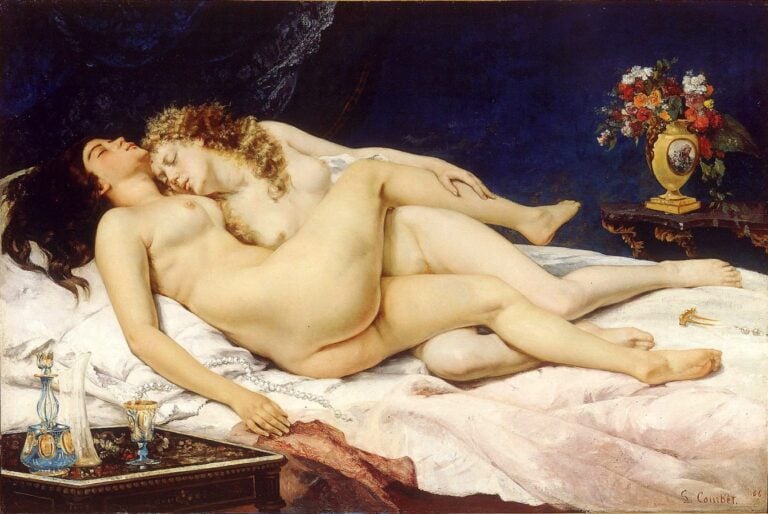 In the 19th century, French painter and rebel Gustave Courbet generated outrage with his scandalous nudes. What exactly was so scandalous about his paintings? Courbet had the audacity to paint (gasp) real women in the nude.

Born in 1819 in a small town in France, Courbet was initially inspired by the artistic greats: Rembrandt, Caravaggio, Titian. He later broke with tradition and embraced Realism, a style which attempted to capture “real life.” At the Paris Salon in 1850, Courbet displayed ten paintings, including the now famous depiction of blue-collar workers titled The Stone-Breakers. Critics were angered and baffled by the drudgery of labor and the realistic depiction of poverty in the work. (Read what art critic A.J. Dupays said about the work.)

Courbet and the Critics

Some of the outrage over Courbet’s early work seems laughable to a modern viewer. In his work The Bathers, for example, critics disliked that the partially nude woman in the painting had dirty feet and was obviously a commoner. Not exactly shocking stuff today.

Courbet’s realism didn’t stop at depictions of poverty or the lower classes of society, though. What really shocked the masses was Courbet’s insistence on painting non-idealized, contemporary women, rather than mythological ones. The Salon rejected his 1864 painting Study of Women (later re-titled Venus with Psyche) because of its “immorality.” What was so immoral about the work? Most likely it was Courbet’s depiction of not one but two (!) naked women that shocked the Salon.

Undeterred by this rejection, Courbet created and submitted Woman with a Parrot.  Although critics disliked the nude woman’s “ungainly” pose and “disheveled” hair, the Salon accepted the painting in 1866.

Courbet’s nudes were not statuesque goddesses who just so happened to be nude, but ordinary, often fleshy, women who seemed more naked than nude. Take The Woman in the Waves from 1868, where the woman’s underarm hair is clearly visible. If this was meant to be Venus, this was not a Venus anyone had seen before. Goddesses, after all, don’t have underarm hair.  The subject of Woman with White Stockings is in the act of dressing (or undressing), as if performing a striptease, something goddesses were also not known to do.

The nudes in Courbet’s work are not anorexic-looking waifs but instead have thick thighs, ample buttocks, and rounded stomachs. So for contemporary viewers bombarded with Photoshopped images of rail-thin models, why are Courbet’s nudes still seen as scandalous today?

To a modern audience, Courbet’s work is often uncomfortably voyeuristic. The viewer is invited, along with the artist, to spy on the nude women as they sleep, bathe, or lounge about outdoors sans clothing. The women are unaware of being the object of someone’s gaze, as seen in the paintings below.

French society continued to be scandalized by Courbet’s work. His 1866 painting The Sleepers was labelled as indecent. In this work, the viewer once again spies on two naked women asleep in each other’s arms. In case there’s any doubt as to what has exhausted them, the discarded hairpins and broken string of pearls in the bed offer clues. Courbet created this for Khalil Bey, a Turkish diplomat who had an extensive erotica collection.

The Most Scandalous Nude of All