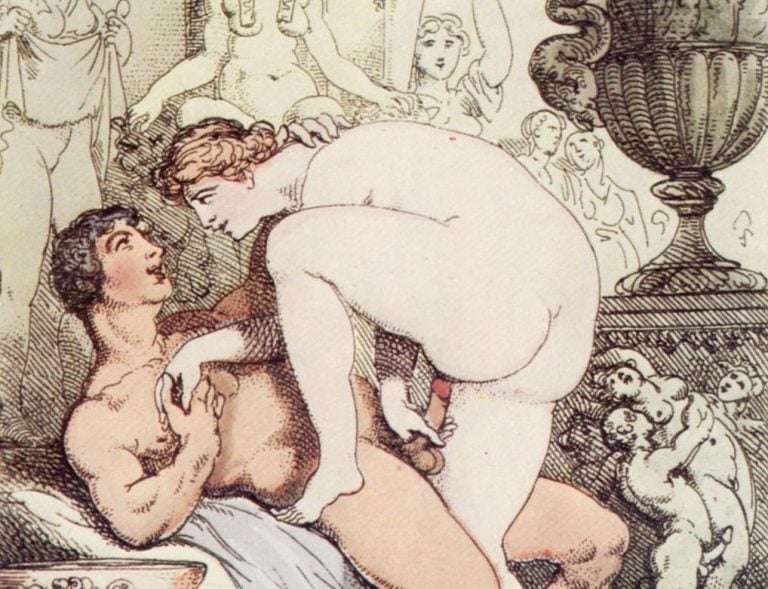 The subject of erotica is vast. Even reduced to only the Victorian world of erotica, it’s a challenge to write about in the space of an article. Really, it’s more the stuff of a book, and indeed many books have been written on the subject! Erotica is tied up with so many other major subject areas: feminism, the scopic consumption of the human form, voyeurism, immorality, domestic virtue, and pornography, to name a few. These and many more conspire to make erotica a much more complex visual form than it might at first seem to be. Let’s concentrate then on sampling some of the images of the era as voyeurs in our own right. However, be warned: some of these images really are explicit!

Before the Victorians there was Thomas Rowlandson (1756-1827), who was technically a Georgian. He was an artist and caricaturist famous for his absurd depictions of the times in which he lived. He was a purveyor of the satirical print, which, at the time, was extremely popular both in and out of England. In terms of his more “naughty” works, he had a fondness for depicting young curvaceous maidens being tupped by a variety of very virile men, all with big smiles and literally everything on show.

Often the young and willing ladies are ogled by much older and very ugly men. Sometimes there is even a third character in the room looking around the corner of from behind a door as if to catch the lovers in flagrante.

The scenes are ridiculous and hilarious (I laughed out loud several times looking at these and trying to decide which ones to show). Have you ever wondered where the makers of the cartoon film Jungle Burger AKA Shame of the Jungle (1975) might have found some of their inspiration? Look no further than Rowlandson! They were considered in their time though to be very rude indeed, and were censored by c.1840.

Victorian Erotica and Pornography: A Hidden Side

The Victorians have a reputation for being very uptight and overly moralistic when it comes to the carnal pleasures. Phrases like “No sex please, we’re British”1 and “Lie back and think of England”2 come to mind when we consider them. To some extent we are right to think about them in that way. There was a public moral loathing of debauchery.

Prostitution, sex outside of marriage, adultery, pederasty, and homosexuality were just a few activities that were seen as an affront to Victorian ideals of domestic purity, and to feminine virtue in particular. It is interesting to note that homosexuality between men was a criminal act, but not between women. It was the act of penetration that was deemed loathsome. Therefore a Victorian woman, being not in possession of a penis, was not physically capable of it.

It is nonsensical to think that a society could be so outwardly righteous without wondering where the outlet might be for basic sexual desires. For the Victorians, sex for the purposes of procreation was a necessary evil. Yet the moment it became lustful or sinful, it was problematic. As mentioned before, “Sodomitical miscreants” were the most heinous of all. The following passage is from The Phoenix of Sodom, or the Vere Street Coterie:

“One of these horrid wretches got hold of a fine handsome boy, whom he met with in the Park […] for the most abominable purposes.  The lad had the curiosity to watch him home; and having called many times without seeing him, the wife was induced to ask his business with her husband? when this young student in the cursed science told her […] The woman, struck with horror, grief, and amazement, retired to her room, and was a corpse in an hour!”

The Phoenix of Sodom, or the Vere Street Coterie, was written by lawyer Robert Holloway in 1813. It was about the case of a group of men arrested and found guilty of homosexual acts. The two were hanged, and the other six pilloried as punishment for their crimes. The attitude towards homosexuality didn’t improve during the Victorian era. To either produce or to possess these images was at great personal risk. The accusation of being involved in “The gully-hole of breathing infamy”, a euphemism for anal sex, could end a man’s life. What sad times to be one way, but to have to pretend to be another.

Photography was used for this purpose almost as soon as it was invented. The Victorians, for all their outward respectability and high-minded principles, had another, secret life in which these images were circulated.