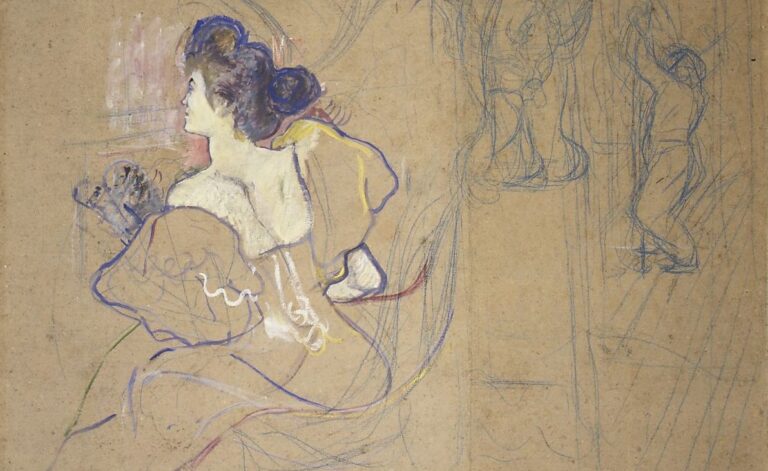 Henri Toulouse-Lautrec is famous for his portrayals of Paris nightlife: cabarets, theaters, and brothels. He showed us a world of decadence and escape from urban malaise where his friends, muses, and patrons collided. He portrayed one of the most famous personalities of his time, Misia Natanson, in a theater.

In this sketch, he depicts Misia Natanson and an anonymous stagehand on a second plane. So we have a woman from the elite, a patroness of the artists, and a theater worker, who is manually pulling down the curtain.

Madame Thadée Natanson at the Theater, made in 1895, was drawn for the cover of the final issue of L’Estampe Originale (1893–95), a quarterly album of original prints. Artists like Camille Pissarro, Paul Gauguin, Pierre Bonnard, Pierre-Auguste Renoir, Paul Signac, James Whistler were also published in its pages.

The lady in the theater box is the glamorous patroness Maria Zofia Olga Zenajda Godebska, known as Misia. Her dress is provocative with a very low-cut back, revealing her slim, elongated neck. We only see her profile, as she is looking at the stage or the audience. She is alone, seductive, statuesque, and mysterious.

Marcel Proust used Misia as the prototype for the characters of “Princess Yourbeletieff” and “Madame Verdurin” in his novel In Search of Lost Time. She was “la reine de Paris” at the turn of the 20th century, painted by Toulouse-Lautrec, Renoir, Edouard Vuillard, Felix Vallotton, adored by writers who also were indebted to her like Paul Verlaine and Stéphane Mallarmé.

As it is a study for the cover design, it is not finished, only her torso and head look fully accomplished. The blue that outlines her silhouette and the curves of her body is unusual, softer than black. She doesn’t wear any jewelry, the only accessory is a fan in her left hand that gives her a more delicate and sensual look.

On the second plane there is a technician bringing down the curtain. Toulouse-Lautrec draws his figure next to a rope, pulling on the chains of stage machinery.

This sketch is a rare instance of an artwork depicting the stagehands’ life, symbolizing those who use their technical skills and talent to ‘pull’ the show together. The roadies, the production technicians, are the silent heroes of each concert or theater piece. Without them the magic does not happen. Nowadays the stage is automated, but it still requires riggers, carpenters, light and sound technicians to make a spectacle, an illusion of a world before our eyes.

The drawing was restored a few years ago, as it was once cut into two pieces and framed so as to reveal only Misia in her loge. However, when the two fragments of the work are joined, the scene depicted is more interesting. It juxtaposes the worlds on stage, in the box, and backstage, making Toulouse-Lautrec’s vision more complex and full-bodied.

In July 1890, Vincent van Gogh painted one of his best-known artworks, Wheatfield with Crows. The painting is on display in The Van Gogh Museum,...

Spring is shyly approaching in the Northern Hemisphere. Longer and warmer days, more light, and the first signs of nature rebirth encourage us to...

In a Cabaret with de Toulouse-Lautrec’s Posters

On the outskirts of Paris, a working-class district with cabarets and dance halls called Montmartre became the bohemian center of the city.