In 1992, Madonna brought the often hidden world of sex and erotica to the eyes of the public through her acclaimed book, Sex. “Sex is not love. Love is not sex. But the best of both worlds is created when they come together”, she wrote on the first page. And while this candidness in talking about it certainly was shocking to the Western world, it was hardly new for humanity. In fact, sex has been a part of art and myth alike for thousands of years.

Very common amongst the Mochica artifacts, phallic-shaped vessels were used to drink liquids during sacred ceremonies. By design, the drinking itself had to be done through the ceramic penis, or else the liquid would spill. But what would probably invite giggles nowadays wasn’t anything to joke about for the Mochicas.

The Mochicas inhabited northern Peru from about 100 to 700 CE and had influence over almost a third of the country’s length today. They lived by the sea and were agriculturally based. Like most cultures around the world, they were very observant of seasons and reproduction cycles, which they represented in parallels to the human body and sex. Nowadays, the naked body is often hidden from the viewer in an act of shame or modesty. The pottery of the ancient Mochicas, however, shows knowledge of it, gained through study and observation, and also integration into the day-to-day activities, suggesting a very different attitude towards it.

As depicted on the pottery in the gallery, the Mochicas recognized sexuality and eroticism, an inextricable link to the animating vital forces of the world, such as the natural power to create life. This characteristic was extended to the Pachamama (earth), as a mother to every living being above. According to some myths, it had been Ai Aiapaec, a civilization hero, who fertilized her with his semen, after enduring challenges to prove his worthiness. This meeting of complementary forces is often referred to as Tinkuy. Such as day has to encounter night, and then day again, men and women had to come together to engender new life.

Sex as a Sacred Ritual

This aspect of sex as a ritual, rather than a reproductive goal, is depicted in many forms. For example, depictions of oral sex, either on men or women, suggest it may have been ceremonially practiced as a tribute to mother earth. 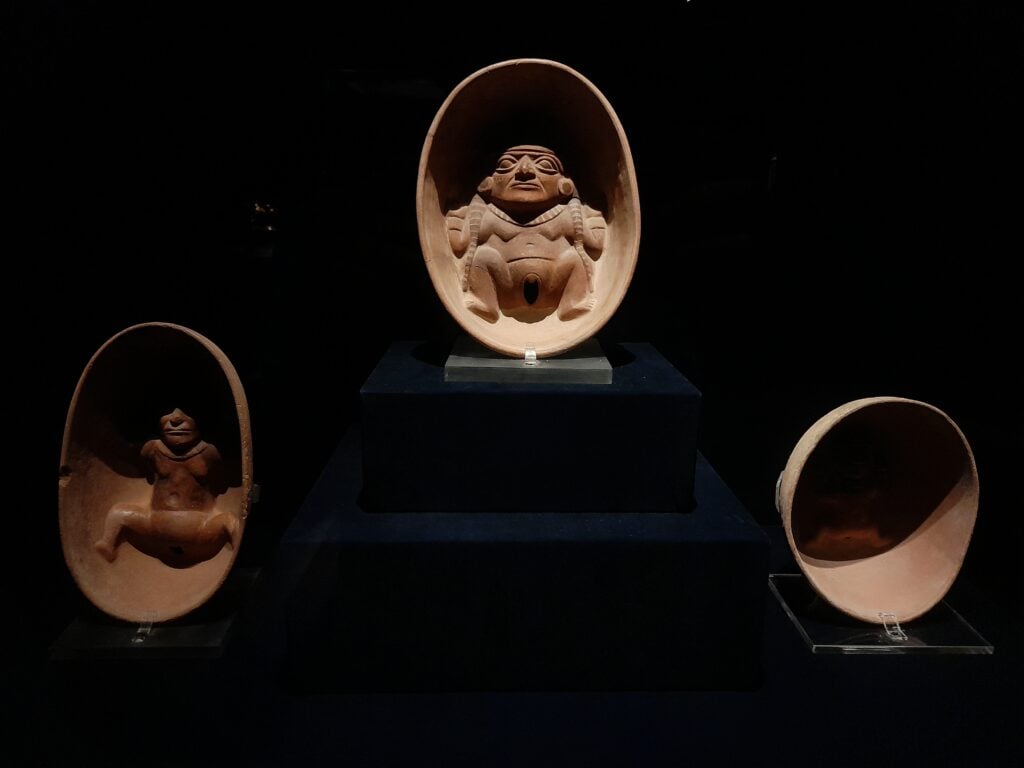 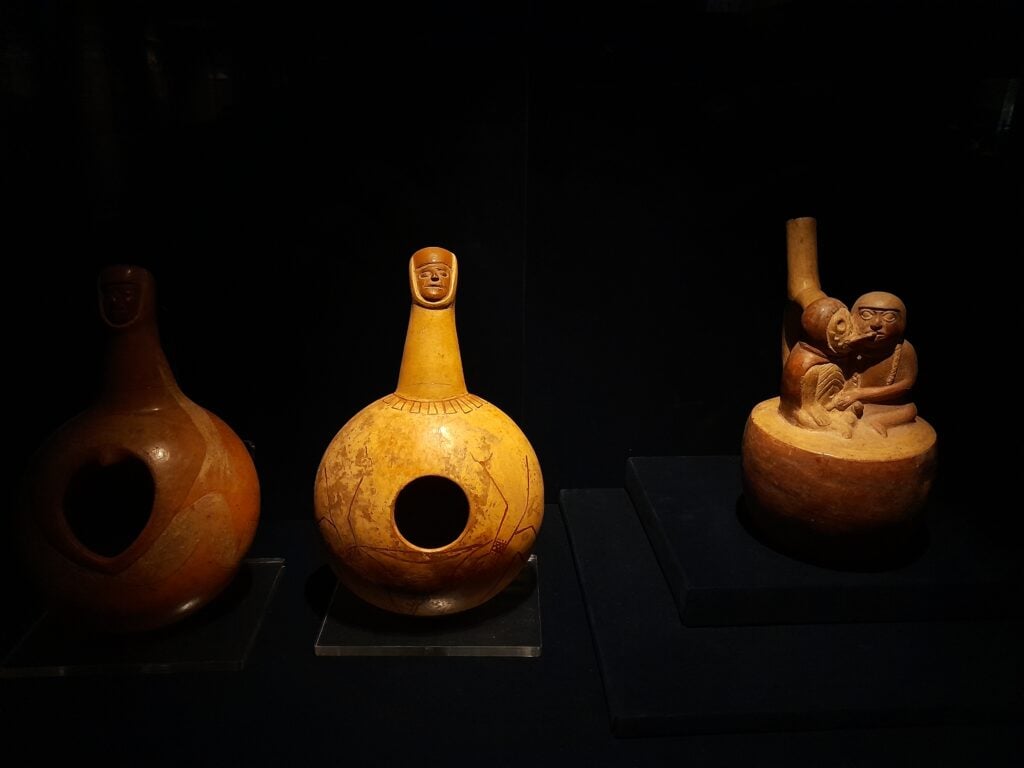 Depictions of oral sex suggest it may have been ceremonially practiced as a tribute to mother earth.

Sex as a ritual is depicted in many forms.

Intercourse itself was shown in very creative ways, ranging from anthropomorphized genitals interacting by themselves to humans in different sexual positions. Whether engaging in an attempt at reproduction, or as means of pleasure, the inhabitants of old Peru sculpted many scenes from their sexual activities, each one unique.

Elements like face painting, special clothes, or geometric patterns, tell us of the importance attributed to the practice of sex. Even the position of the handles, connecting the heart to the sexual organs, was meant as a way of indicating the spiritual aspect of sex. 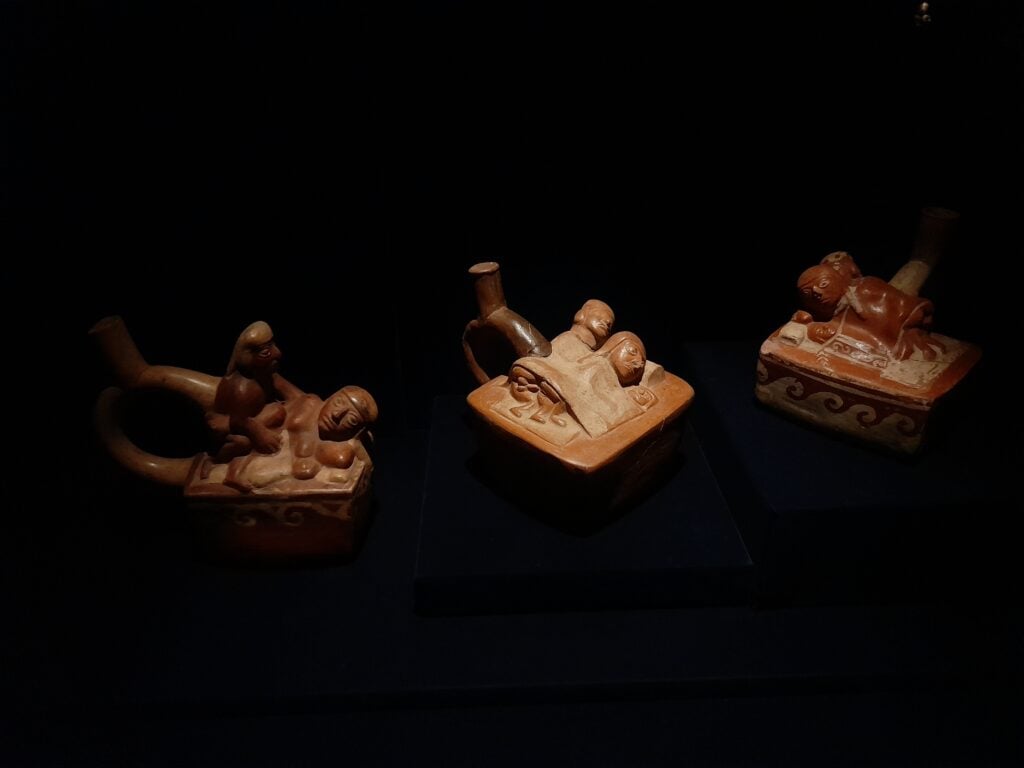 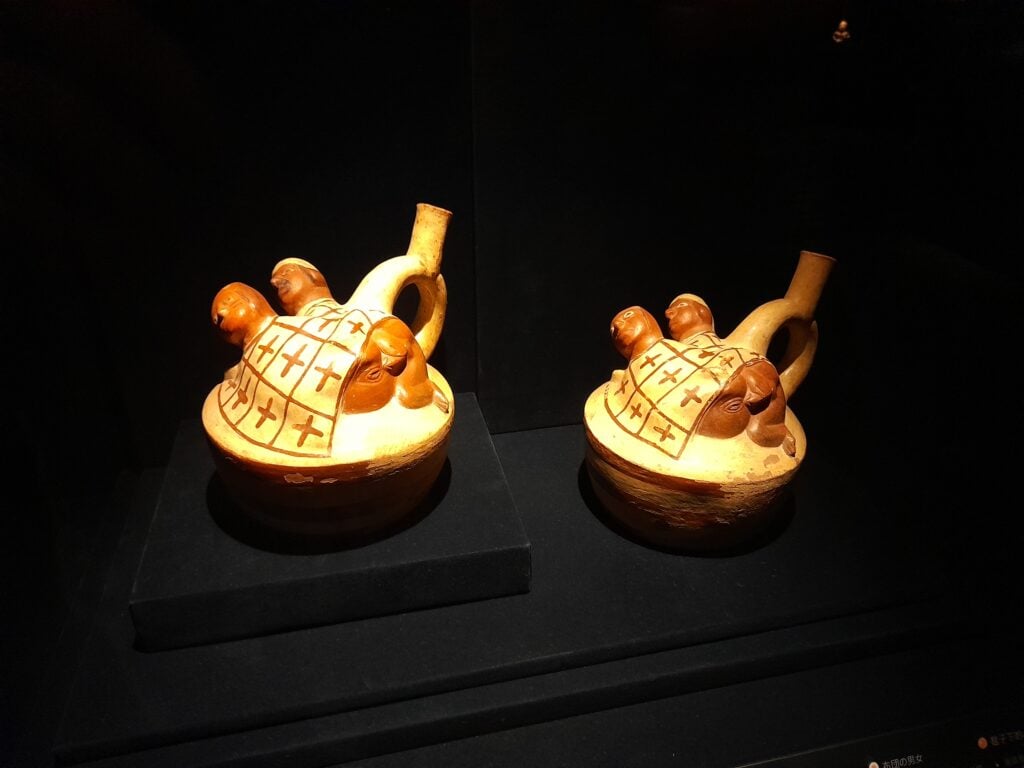 Face painting, special clothes, or geometric patterns, tell us of the importance attributed to the practice of sex.

Sculptural clay bottles depicting a couple under a blanket

The position of the handles often connected the heart to the sexual organs.

Erotica and the Reproductive Cycle

Keeping in theme with the reproductive aspect of sex, scenes like childbirth or breastfeeding were also pictured in the sculpted pottery. Breastfeeding, a rite from which not even the gods were exempted in myth, has been pictured in art all over the world. And the Mochicas were no exception. 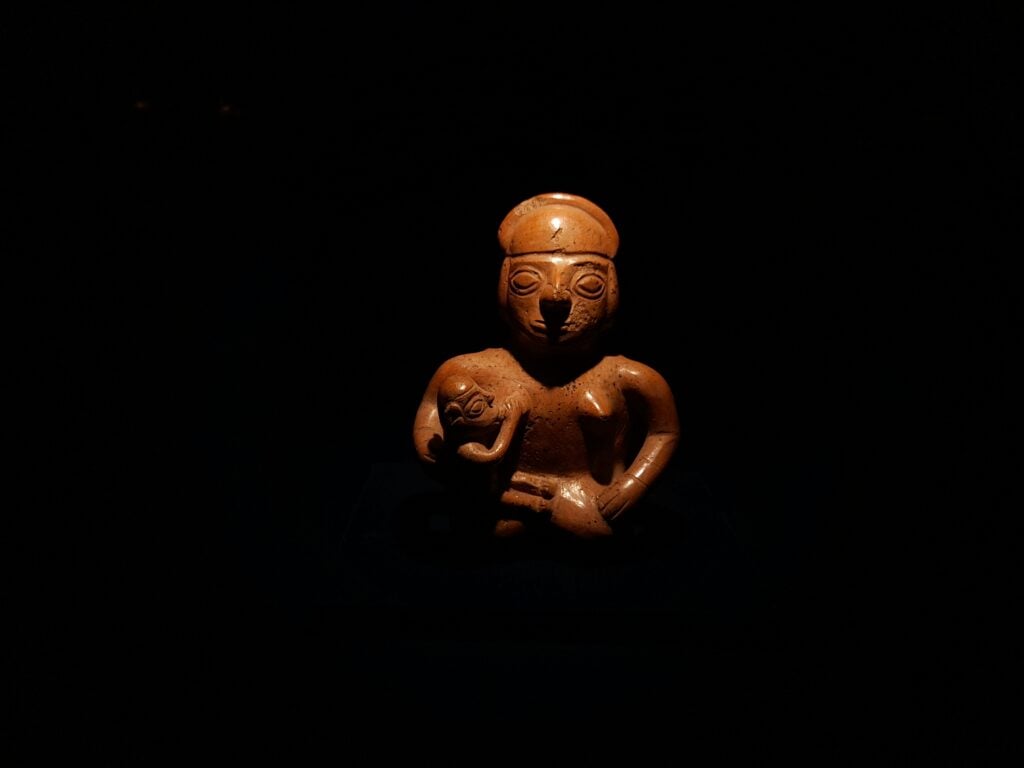 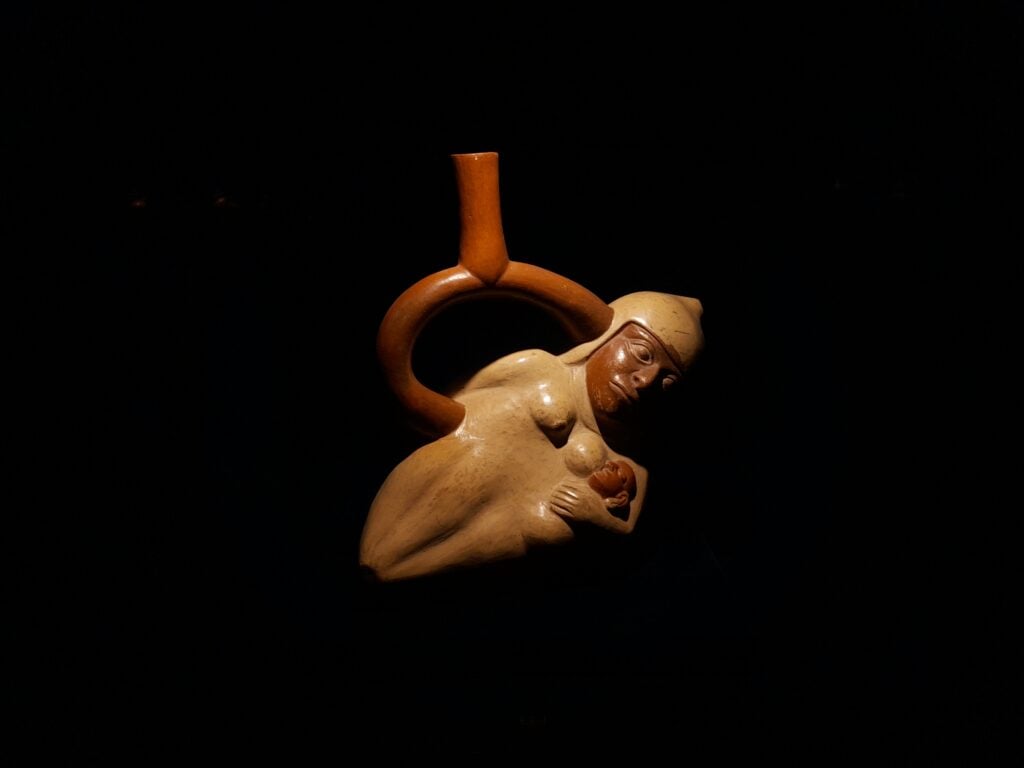 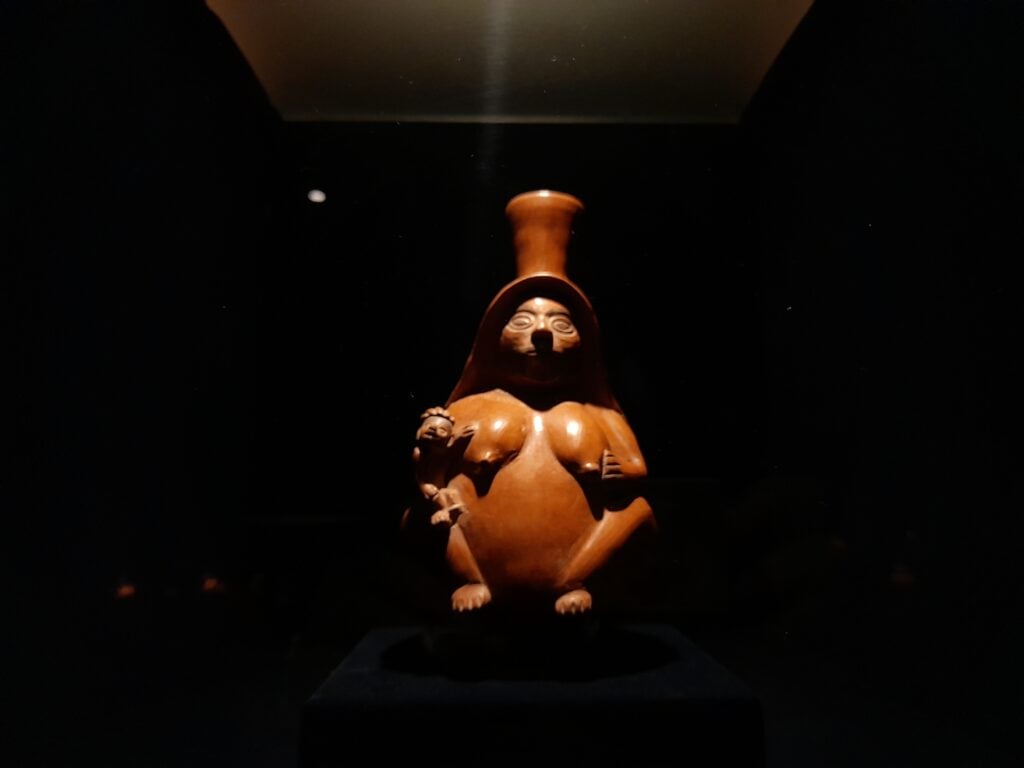 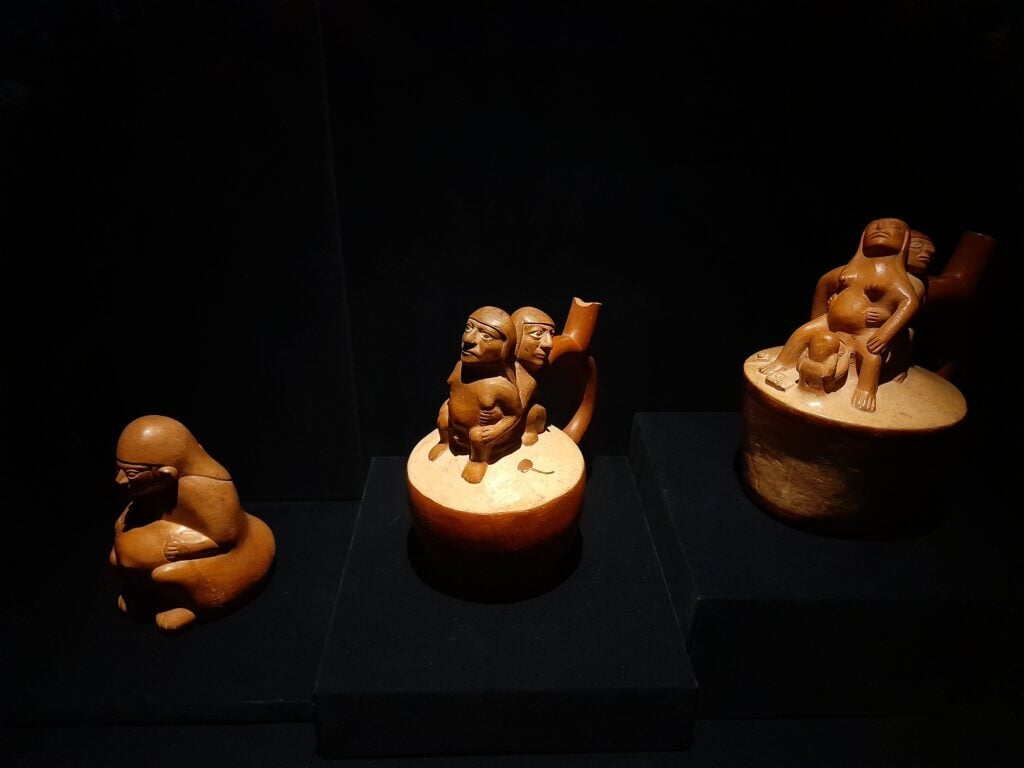 Scenes of breastfeeding were oftent pictured in the sculpted pottery.

Breastfeeding was a rite from which not even the gods were exempted in myth.

Breastfeeding has been pictured in art all over the world.

Depiction of pregnancy and childbirth

Childbirth was also a popular topic in ancient Peruvian pottery.

Other scenes presented animals and their mating habits. While some are simply depictions of nature, other times they represent an aspect of myth. For example, toads, which represent the humid world and are akin to the female womb, mate with the earthly jaguar to give birth to a jaguar-eared toad, from which the cassava plant grows. 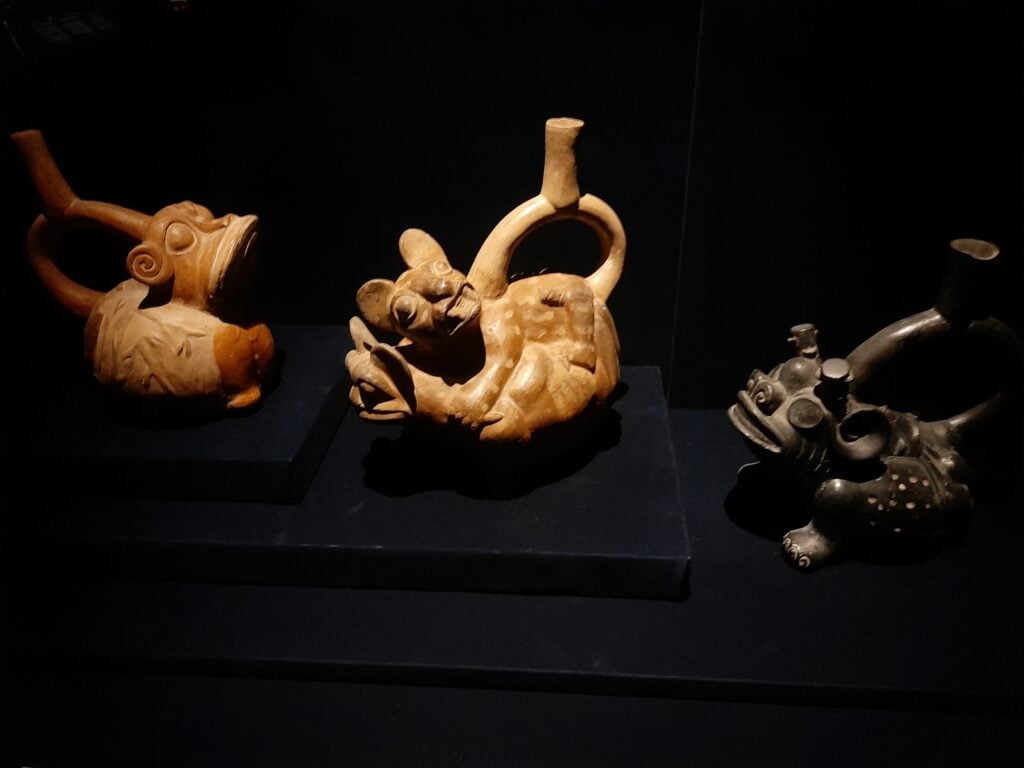 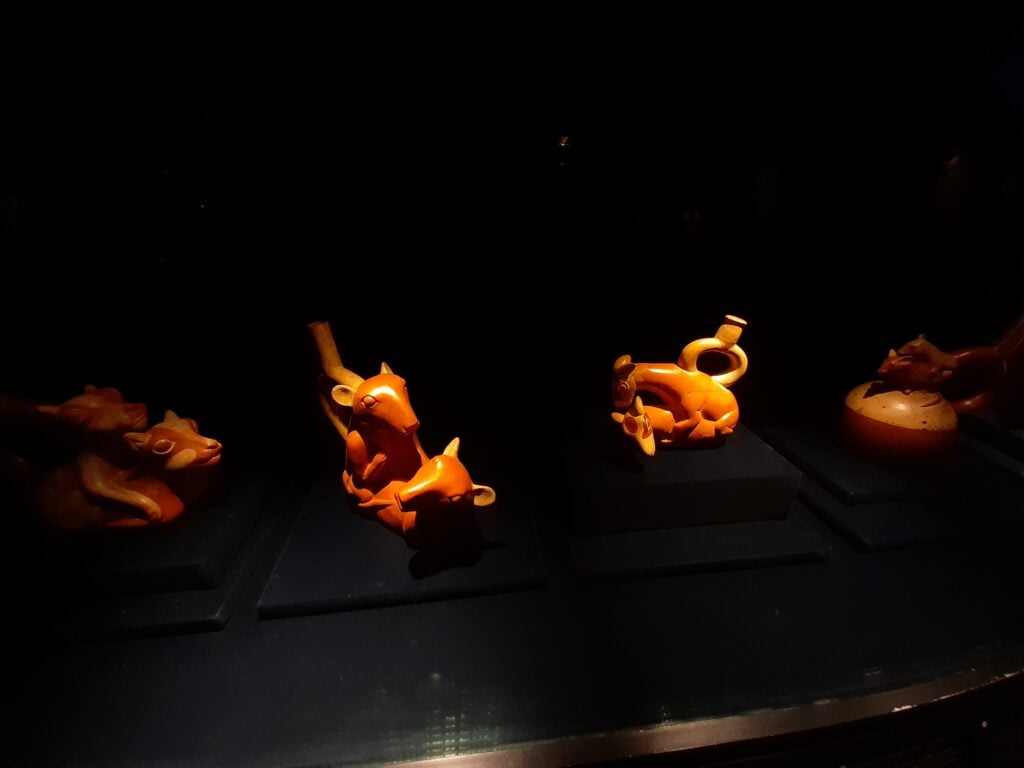 Pottery showing the mating of a jaguar and a toad

A toad and a jaguar mating represented a myth of fertility.

Other scenes in pottery presented animals and their mating habits.

Telling Their Own Story

While the Erotic Gallery’s exhibition features a tomb, where many of these pottery pieces were first found in the beginning, it is only fitting to talk about it at the end. Ancient Peruvian pottery, through which much of the Andean pre-Columbian history has been reconstructed and understood, has been found buried and hidden in tombs, long forgotten by their survivors (if there still are any). Cultures like the Mochica, Chancay, Nazca, Incas, and many more, left mysteries that will never be solved, but they also left much evidence to help us piece together how they saw the world. Exhibitions such as this help us remember that whatever truth we behold from our own experiences, reality, and world views can be a unique experience depending on who’s telling the story.

As Rafael Larco himself is quoted in the exhibition (from his book Checán):