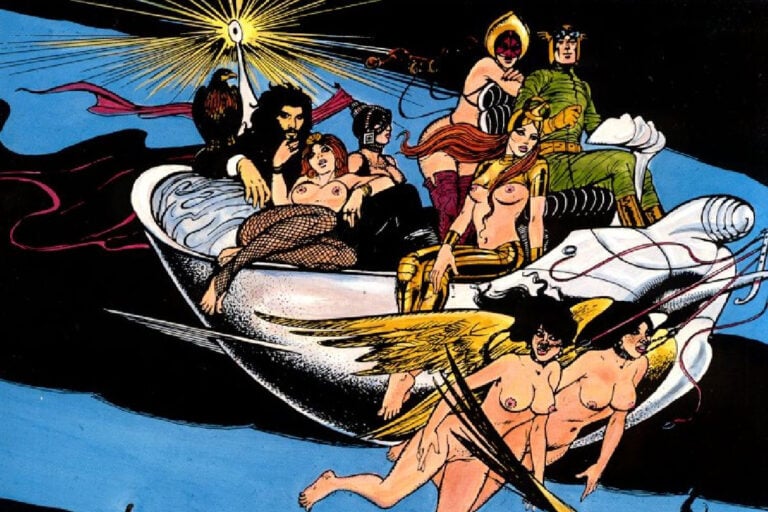 Two Parisian comic artists met in the early 1960s. Along with their flourishing friendship, a quirky artistic journey unfolded for both and led to the creation of many brilliant comics. Jacques Lob was the author who gave voice to the characters and narrated what they went through on their adventures. On the other hand, Georges Pichard depicted all of the visual segments of these graphic novels and comics. It wouldn’t be inaccurate to call them one of the most prominent comic book artists of the 20th century. From Pilote (a magazine in which Asterix first appeared) to Charlie Mensuel (a magazine that gave its name to Charlie Hebdo), our duo collaborated and worked with universally known comic magazines and artists.

Their creations are considered valued collectibles. For instance, one of Pichard’s comics sold for 10,250 € in 2016 at Sotheby’s. It is important to emphasize that they partially owed their success to controversial and sensational publications. There is no doubt that Pichard and Lob were disliked by many. Their works were certainly composed of major erotic/adult content, and some found their artistic direction objectifying and provocative. At any rate, we have imaginative and unique two-volume graphic novels at our hands to observe, and we wouldn’t be doing any justice if we nullify the work due to the controversies.

In Pichard and Lob’s universe, the Olympians are not exactly omnipotent gods and goddesses. Instead, they are highly technologically advanced individuals. This applies to minor divinities as well. The authors do not provide the reader with an explanation of how the Olympians happened to reach this level of advancement, but there is a common reader theory for it. These individuals who lived in a different millennium somehow were able to invent a time machine and travel back in time with their gadgets and equipment. It is a logical theory because if any of us were to do the same and go back to 2000 BCE with even a mere flashlight, a similar narrative would possibly unfold where the ancients would think that you are some sort of sun god.

In their version of Odyssey, the Olympians lived in a metal fortress on top of Mount Olympus. This fortress was also a vessel that could fly in the air and cause natural occurrences, such as a thunderstorm. With this concept, the authors present a logical explanation of how the gods can follow and watch what poor Odysseus is up to all the time; they have an enormous cinema-sized screen and telescopes on the ship! They all lie down around in their elegant ship, like the Avengers’ Helicarrier, all day in their pompous costumes—which were clearly inspired by American superheroes—and try to convince almighty Zeus to cause some drama for Odysseus. Of course, with her seductive garment, Athena is an exception and does everything to protect Odysseus.

The art direction that Pichard embraced is rich in every aspect. No chapter lacks detail. From the characters to the setting, it is clear that the artist desired to give every subject—whether it was a creature or a hero—a personality. They are not just copied versions of previous portrayals; they are original, and their designs are innovative. Thanks to the literary and artistic elasticity of comic creation process, every element could easily be full of life, exciting, and somehow tied to the source material. There is no doubt that the artist took considerable liberties pertaining to the appearance of many characters and their deeds, but it is significant to ask ourselves this question: how does one create something unique without denying the expected? For instance, their way of ending Odysseus’ journey is certainly an unexpected one! Also, the entirety of the comic consists of many quirky homages to Homer, which I think will make every classical literature enthusiast giggle. We even get an explanation for how Homer became blind! Of course, him being in the Odyssey itself is chronologically problematic, but there is no doubt it is a meaningful tribute from the artists of the 20th century to Homer.