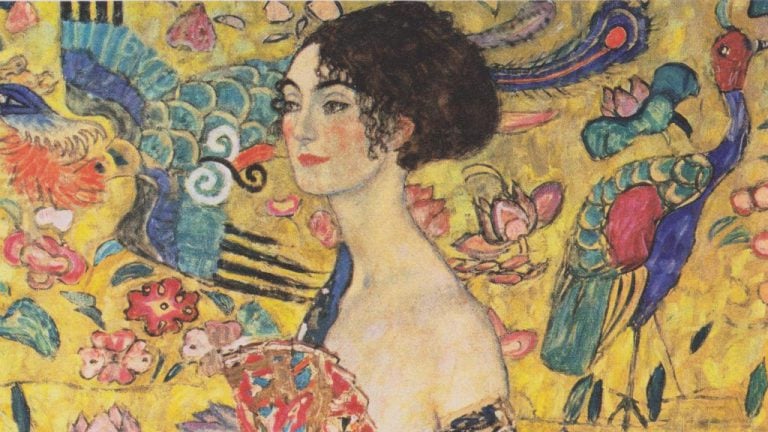 Fräuleins (Ladies), step aside! This steaming-hot brunette is back in town! After 100 years of captivity, away from the Viennese public, she returned to the Upper Belvedere, where she is now showing off her superb skin. Meet one of Gustav Klimt’s last ever subjects: Lady with Fan.

Journey of a Portrait

The Austrian Modernist Gustav Klimt completed the canvas Lady with Fan in 1918 at the age of 55. That same year, this celebrated, controversial artist died. Below, you can see a picture of his study as he left it. On the right hand-side, resting on the easel in the stillness of the room, we can unmistakably spot the elegant portrait we are talking about. The photograph was taken by the painter’s friend and fellow Viennese Secessionist, Moritz Nähr.

Shortly after Gustav Klimt’s death, art collector Rudolf Leopold acquired Lady with Fan and exhibited it at the Kunstschau, an innovative cultural site in the center of Vienna, in 1920. After this public appearance, the same art collector then sold the painting. The canvas has been shown again to the public just two times: in 1981 in Tokyo and in 1992 in Krakow. After nearly 30 years this unknown “Viennese beauty” finally found her way back to Austria.

As the ordinary and the material became the favorite subjects of Realist artists, due to the Industrial Revolution, Europe saw the light of a Romantic counter movement, which also harbored the Viennese Secessionists. The Romantics did not share the Realists’ fascination for sooty bolts and fiery furnaces. No, a lady surrounded by flowers was all they could possibly desire and aim to represent.

The study of the female body has always overlapped with the study of beauty, as showcased by some of the prehistoric statues found in the dirt by the first archaeologists. Never as much as it did for the Symbolists and the Romantics; they were fighting against the ugliness and dullness of the industrial emerging reality. So here we are, looking at this beautiful lady, painted in front of a ravishing wallpaper.

It is a rather dazzling design in full Japonisme and Art Nouveau style, just like the robe and fan. It all successfully competes with the human figure in capturing our attention, bringing to the fore the beauty of the Art and Crafts creations.

The composition of this painting is very simple indeed. A slender female figure, elegant, elongated, and embellished with what looks like prime oriental fabric stands alone in the framed space. She holds a fan, hiding her partial nudity. By the look on her face, we can say with enough confidence that her intention is to tease the viewer, rather than be prude. There are no further elements depicted here. Just her, her robe leaving her glorious shoulder out, her fan barely concealing her left breast and a wall. Yet, one could hardly say that the surroundings seem bare and empty…

As far as vibrancy goes, it would be hard to find a better equipped wallpaper! Behind our whimsical brunette, there is a triumph of a garden: huge flowers blooming and exotic birds taking flight and perching majestically in the pasty yellow-ochre density of the background.

In conclusion, this vibrant portrait was never actually “lost.” It did not vanish, nor was stolen. However, I guess it kind of felt that way to any self-respecting Austrian museum-goer. I know how I feel about all the eye-watering Italian masterpieces I can enjoy live only when visiting foreign countries, so the Viennese public must be thrilled about the repatriation of their semi-nudist compatriot. I share their enthusiasm and hope I’ll get to visit her soon!