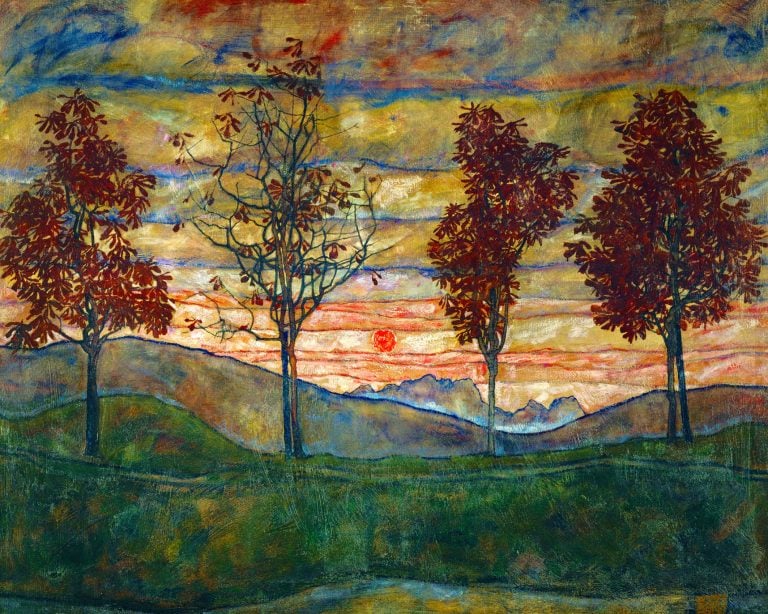 An Ode to Autumn with John Everett Millais

Autumn in is the full swing. Where I am now, is pretty gloomy and grey, I really need to look at beautiful and colorful autumn paintings created by famous artists to stay sane. From Claude Monet to David Hockney, here are some of the finest portrayals of autumn.

Claude Monet painted this autumn view of the Seine near Argenteuil around 1871. He likely sat in a small boat converted into a floating atelier. In the far distance we can see Château Michelet. Monet perfectly coneyed the feeling and beautiful light of the early days of autumn.

Pierre Bonnard, a member of Les Nabis group, depicted in this landscape a vast view over fields and forests already changed by autumnal weather. He used various colors to depict the abstract nature of autumn.

These two pieces by Vincent van Gogh are unlike his other famous works. The detailed charcoal, pen and ink drawing depicts a view of an orchard in Zweeloo, a village in the area of Coevorden. The use of dark paper magnifies the gloomy feeling of autumnal days when we sometimes go for a stroll in a park or an orchard.

These two works show what the early style of Van Gogh was like. The painting was gifted to his friend, Antoon Kerssemakers, an amateur painter who was impressed by “the soft, melancholy peacefulness of the combination of colors” that Van Gogh employed in this work.

Here you can see other works from this series as well as the painter himself working on canvases in the middle of the forest!

Enlarged and detailed “portraits” of flowers and leaves are this American artist’s trademark works. These leaves are believed to have been collected by Georgia O’Keeffe from the local area and used for the paintings, something all of us did as children or even as adults.

Gustav Klimt’s Birch Forest looks enchanting, doesn’t it? Although it is a landscape depicting tree trunks it still reveals the decorativeness and attention to detail so peculiar for Klimt. The golden aesthetic reminds us of the famous The Kiss but also of the beauty of autumn leaves!

Below you can see a contemporary take on Klimt’s Birch Forest.

October on Cape Cod is one of Edward Hopper’s last paintings from 1946. He visited Cape Cod, on the southeastern corner of mainland Massachusetts, with his wife in 1930 where he rented a house for three years. This isolated and tranquil view of a coastal house represents perfectly the moderate climate of the peninsula.

Frederick Childe Hassam, an American Impressionist, moved with his wife Maude to France in the autumn of 1886. In the autumnal scene we can see a young woman standing between the trees and gazing onto a Parisian boulevard. This painting perfectly depicts the dark and rainy days of Impressionist capital covered with autumnal leaves and with wet pavements reflecting the gloomy sky.

Henri Rousseau, a French painter known for his Primitive or Naïve style, rendered this view of Paris with the Eiffel Tower’s top sticking out from the canopy of trees, already turning orange-yellowish. These beautiful autumnal colors are also rendered in the sky and its reflection in the waters of Seine river.

This painting with flamboyant autumnal light is probably one of the first paintings done by Paul Gauguin in Arles, where he travelled upon invitation of his friend, Vincent van Gogh. The area depicted in the painting is called Alyscamps, a large Roman necropolis outside the city walls of the old town of Arles. However, in this particular work no sarcophagus is visible, only a lantern tower and a Romanesque church of Saint-Honorat are barely seen in the background.

Egon Schiele’s Four Trees is a stunning landscape and one of his most reproduced works, right next to his famous self-portraits. Schiele focuses on the balance between vertical and horizontal lines for the composition. His masterful use of light and color is perfectly showcased in this depiction of an autumnal rendering of an Austrian hilly landscape with powerful mountain range visible in the background. My personal opinion is that this painting looks like a beautiful stained-glass work.

Famous Russian painter and theorist, Wassily Kandinsky, developed most of his artistic and intellectual career in Germany. After a few years of constant travels across Europe, Kandinsky settled down in a small Bavarian town of Murnau.

The artist depicted Murnau in many of his works, including in this one, where we can see the mountains surrounding the town. Kandinsky’s take on autumn is quite different to other artists, as he employs rather cold tones in his palette, with a prevalence of blue. Autumn could be much less inviting and pleasant in the rough Alpine valleys than in cosy cities like Paris or Arles…

This work is one from the series of four seasons commissioned in 1868 by Frédéric Hartmann, a French industrialist. In Haystacks: Autumn, Millet shows a field landscape with finished harvests. In the background we can see the houses from Barbizon. Haystacks were a common and popular theme chosen by French painters as it challenged them with multiplicity of colors, hues, lights and shadows cast on them. It also was a perfect theme for series presenting either seasons or times of the day.

Just like above, Katsushika Hokusai’s print depicts Japanese fields with peasants. Depictions of harvests were a classic theme for autumnal landscapes. Autumn in Japan is very similar to one in Europe, turning the leaves of maple trees flaming red. In this print we can see how Hokusai depicts the gradual change of leaves on single trees or canopies from green to red.

What are your favorite landscapes to greet autumn? Do you prefer more contemporary or classic pieces of art? Leave your suggestions in the comments, they will be very helpful for us to decide what to feature in our free mobile app DailyArt (available for iOS and Android).