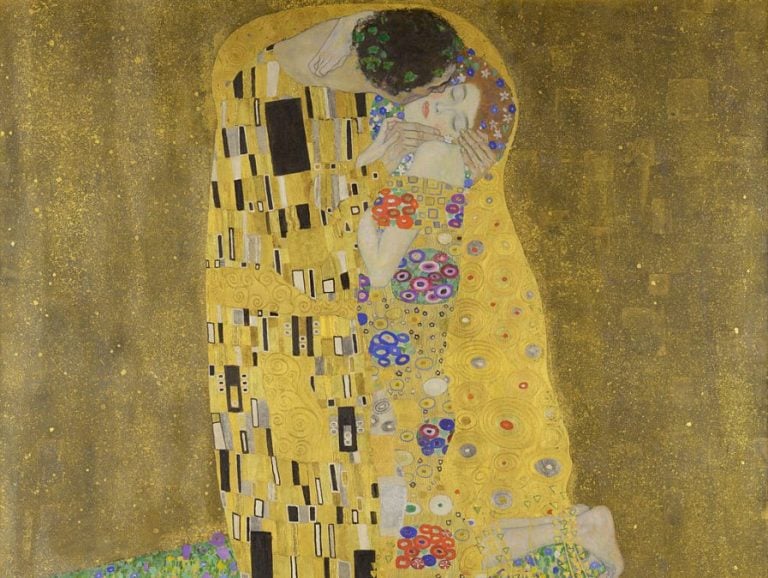 Have you ever looked upon Gustav Klimt’s portrait of The Lady in Gold and wondered why she was so worshipped? What made the artist immortalize her with such reverence? Or why the couple in The Kiss is on the precipice of a cliff above an ocean of bronze? Here’s a look at four masterpieces by Klimt.

This brief golden period was one phase during the diverse art life of Gustav Klimt. He was born in Vienna, in 1862, to a father that worked as a gold engraver. Due to his parents’ recognition of their sons’ potential, Gustav and his brother Ernst studied at Vienna’s School of Applied Arts. There they excelled in their studies and practicums. Soon Klimt was earning commissions for small-scale portraiture and stain-glass designs for Vienna’s Votivkirche, or the Votive Church, in English.

Klimt, his brother Ernst, and their classmate Franz Matsch, later known professionally as the Künstler-Compagnie, worked their way up to great recognition from Rudolph von Eitelberger, the founder of the School of Applied Arts. He gave them “Artists’ Company” scholarships to continue for two more years at the school, studying decorative arts and painting, something much in demand as the century was approaching its close and the Ringstrasse was rising faster and faster. One of the commissions completed by this troupe was the ceiling paintings of the Hofburgtheater.

The view in the Burgtheater in Vienna of The Theater in Taormina does not simply depict oil figures in plaster. Instead, it holds a window to a haven where dance, music, architecture, sculpture, and the human form are celebrated. More than celebrated. The figures are embodiments of their art. A place where philosophy conversed as often as breath is taken and food is eaten. Where the horizon is unknowable, like an unending ocean, and this island of peace and beauty is all that remains to float on the river of eternity. The panel runs parallel along the staircase, so, as you rise, you may convince yourself that you can step into this paradise. The ceiling paintings were well-received, but there was one commission on the horizon that would decide Klimt’s fate as an artist for the rest of his life.

The Vienna Secession was an artistic organization founded on May 25th, 1897, with Klimt at the helm as its first president and frequent exhibitor. The goal of these avant-garde artists was to break away from the traditional modes of art supported by the Society of Vienna Artists. They favored new modes of expression to reflect the industrial progression and other aspects of modern life. The group embraced symbolism in their works, alongside the Art Nouveau style and Proto-Expressionism. The success of their shows and the public’s praise of this new wave in art led to a permanent home, the Secession building, established in 1898. The same year marked the end of Klimt’s greatest involvement with the Secession, as he began to pour his efforts toward what became known as the Faculty Paintings.

Commissioned for the Great Hall of the University of Vienna, this work was considered of the utmost importance. With it, Klimt was expected to dazzle the critics and the public. Although all three paintings, Medicine, Philosophy, and Juris Prudence, were later destroyed in a fire at Immendorf Castle in Austria, photographs and compositional studies remain. Shown here is Philosophy. As our eye travels along the left side, we can observe twisting human forms at different stages of life, spiraling from birth, through bodily pleasures, existential agony, and finally descending in the image into aging and decay, suspended in a cosmic ether. From the void, a larger human face emerges as the essence of the ever-searching soul, wishing to become one with the universe that birthed it.

One other figure, maybe an oracle or a shaman, looks directly at the viewer. Hoping perhaps to find the eternal truth by refusing to be entwined in the cycle that flows past her. 11 years after receiving the assignment in 1894, Klimt’s failure to satisfy the public and the officials led him to retreat from public commissions altogether. He would not allow censorship to affect his work. His philosophy was:

When I’ve finished a picture, I don’t want to lose more months having to justify it to everyone. What matters to me is not how many people it pleases, but whom it pleases.

Known as Austria’s Mona Lisa, Portrait of Adele Bloch-Bauer I became one of Klimt’s iconic works. It also became one of the most expensive paintings ever sold and the most expensive at the time in 2006, costing the buyer $135 million. Furthermore, it is well known in recent history for the 7-year legal dispute of ownership, later documented in a book with the alternate title for the painting, The Woman in Gold.

The Woman in Gold was later adapted for the big screen. However, to focus only on the dispute is to ignore both the figurative and literal brilliance of the painting. Gustav Klimt began using gold leaf in his paintings after visiting Byzantine-era churches. He was amazed by the golden mosaics that constituted the designs of the holy saints. What Klimt worshipped, though, were women.

At the turn of the century, many commissions came from the husbands of the wealthy women of Viennese society. Adele Bloch-Bauer was no exception. Speculation exists on whether the model and the artist were lovers for two reasons. Firstly, many of Klimt’s models became his temporary lovers, some even walking away with pregnancies. Secondly, the painting appears to delicately portray every curve of Bloch-Bauer’s figure, surrounded by the glowing gold of a saint. In contrast, the sister painting completed several years later, the Painting of Adele Bloch-Bauer II, is lackluster in comparison. Perhaps attributable to their affair being over at that point, causing Klimt to paint without the passion he may have once held for Bloch-Bauer.

Not many of Klimt’s works utilized gold leaf. Most of his works did not need it, as the symbolism and sensuality were rich enough to heighten the viewers’ pleasure. A plethora of sketches and paintings exist depicting nude women, women in ecstasy, women with children, and women in a passionate embrace with men. The Kiss is one such example. The embracing couple is kneeling on a millefiori pasture, a predecessor to his later flower landscapes. Although both figures are draped in cloth and, in the woman’s case, also vines of gold, we can separate the two bodies based on the masculine, dark, hard rectangular forms on the man’s tunic and the softer, brighter, round shapes on the woman’s dress.

In both The Kiss and Portrait of Adele Bloch-Bauer I Klimt utilized gold and silver leaf to create the clothes and furniture around their subjects. A heavenly throne for Adele and saintly robes for both. Worship of women, and sensual passion: his most prevalent themes, praised at the time, in part, because of the lack of bare skin. Although the nudity he delivered in his other work was considered downright pornographic by Klimt’s critics at the time, the artist depicted more than nude bodies to express his own desires. Women flocked to Klimt not only because of his talent and physique. Some arrived in his studio in the hopes of releasing their own frustration from the sexual repression of their culture. Not to forget, this was the time of Freud, who observed these sexual constrictions and developed an entire body of theories based on how they contributed to mental illness.

While The Kiss and Portrait of Adele Bloch-Bauer I are his most well-known works, Klimt’s landscapes should not be ignored. He first began painting landscapes in 1900. Since they were unpaid commissions, the artist had a chance to experiment and express the nature he privately observed while spending summers in Salzkammergut with his sister-in-law. Emilie Flöge was his companion in life and a fashion designer with whom he occasionally collaborated. These landscapes were a release from the demands of state and private expectations of his art, as well as a stable source of income in the second half of his life. His favorite tool that helped him to find a nature motif or a view to start a painting, was a piece of cardboard with a square hole. It is something with which every artist is familiar: a viewfinder. Seen here is one such painting, The Marshy Pond.

Here we can see recognizable textures and techniques. The grass in the background melds into a foggy peripheral, similar to the ethereal fog in Philosophy. However, the reflections of the pond dominate the foreground with speckled forms of color, reminiscent of the rounded forms of the woman’s dress in The Kiss and the background chair in Portrait of Adele Bloch-Bauer I. The cool purples of the tree trunks, the pinks and greens in the pond, and the surrounding grass translate a feeling of serenity that Klimt must have finally felt after leaving his demanding portraiture work and societal criticisms. Gustav Klimt suffered from syphilis toward the end of his life and eventually a stroke, resulting in his death in 1918. He is remembered as a pioneer in the birth of a new era in art. His work remains well-celebrated and respected for its radical themes and radiant colors that still mesmerize viewers to this day.

My name is Valentina Gottschling. When I’m not reading about turn-of-the-century European or ancient Egyptian art, I love working on my watercolor paintings, reading science fiction and horror novels, and admiring the cover art of those books from their 1960s and 1970s editions.