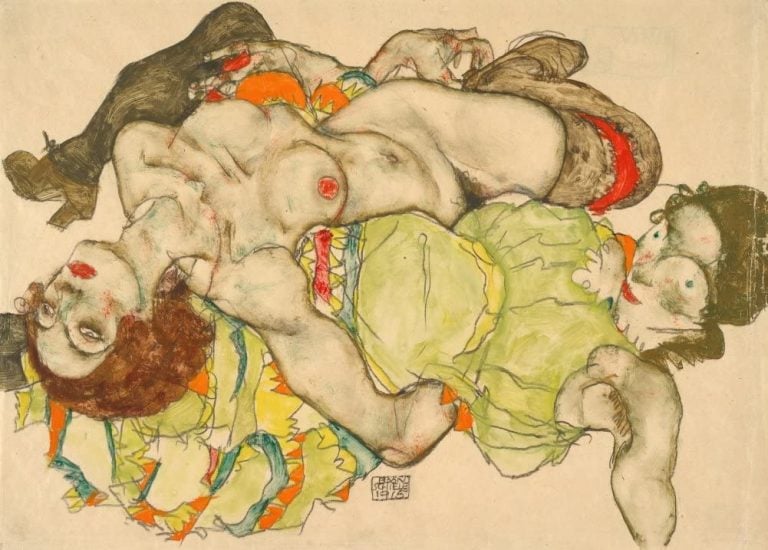 The provocative artworks of the Austrian Expressionist Egon Schiele are not just about exploring the sexuality of human bodies. The artist also expresses inner experiences through the pathological body. These two aspects of the artist’s oeuvre are united by one term – hysteria.

Schiele lived at a time when the diagnosis of hysteria was very popular. Nowadays, it does not exist as a medical term (it has been replaced with more precisely defined categories), but in the late 19th to early 20th centuries, hysteria was a popular term in medicine. In general, it was considered a women’s disease – a disorder of behavior due to the movement of the uterus inside a woman’s body. One of the reasons for these “uterine hardships” was sexual frustration. Hysteria revealed itself as excess emotions, convulsions, paralysis, deafness, blindness, fainting, increased sexual activity and other made-up symptoms.

Hysteria came into art in the form of a crisis of sexual identity. Along with Gustav Klimt and Oskar Kokoshka, Schiele became one of those who actively reflected the complexity of the theme – what sexuality is; how it reveals itself; how a person experiences his/her own sexuality and the sexuality of other human beings; what distinguishes healthy sexuality from pathological sexuality, can sexuality even be pathological and if so, where is the boundary between normal and pathological?

It is worth noting that for the patriarchal bourgeois Viennese society of the early 20th century, the manifestation of sexuality, especially of women, was a priori a pathology. So when the artists decided to represent sexuality, something considered a pathology at the time, they were accused of the creation of pornography.

Schiele ignored this and continued to study the pictures of women suffering from hysteria in the Iconographie photographique de la Salpêtrière (1876-1880). They were all patients of Dr. Jean-Martin Charcot (1825-1893), “the father of neurology” and a teacher of Sigmund Freud, the founder of psychoanalysis.

A lot of his artworks lack soft, smooth lines and instead emphasize sharpened angles which enhances the feeling of inner tension.

The “colored bodies” resemble maps – every bone, elbow, nipple, cheek, knee shows a different area. The thigh is highlighted in another color, as if denoting a problem area.

Through external metamorphoses, Schiele shows us the inner experiences of identity, sexuality and desire.

Considering the social climate in Vienna at the time, Schiele reminds us of a child who challenges adults by searching for answers and exploring the forbidden.