An Ode to Autumn with John Everett Millais 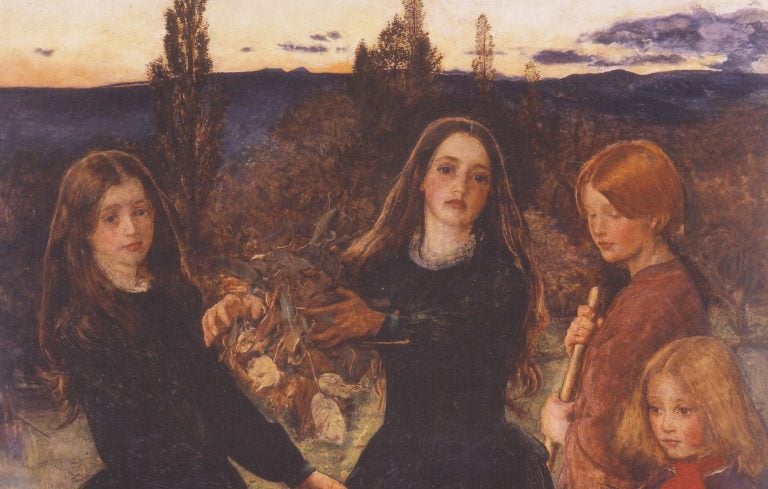 Autumn weather can be unpredictable. Some days the earth looks as if cut out of crystal: the sky is a milky blue, and the sunlight is sparkling and golden. Yet, the very next morning all might be blanketed in grey: the clouds hang low, and mist obscures sight. The landscape is given a human quality, relatable to its changing moods. A beautiful day uplifts and a rainy day encourages introspection. John Everett Millais captures the uniquely human quality of autumn. Invoking thought and feeling in two paintings, Autumn Leaves (1855), and Chill October (1870).

John Everett Millais (1829–1896) painted both scenes in Perth, Scotland where he lived with his wife Effie, and their children. Painting in his garden, Millais employed Effie’s sister and her friends as models for Autumn Leaves.

Four young girls gather autumn leaves, piling them in a cascading pyramid. They are building a bonfire, from which grey plumes of smoke are beginning to rise. The garden behind is dark, shadowy, and indistinct. Tall slim trees and a few drifting clouds are silhouetted against the brilliantly lit yellow and orange sky. The sun sets out of sight, shining on the faces of the girls. Their rosy cheeks match the leaves beneath them. It is a painting of the senses. The leaves rustle and whisper, papery but damp. The warm smoke emanates through the cold evening air. Millais paints a whole variety of leaves, of all shapes and colors, layer upon layer. Simultaneously, they rise up and tumble down from their momentous tower. Millais creates an illusion of great height and mass by painting the leaves in a triangular composition.

Every October, harvest festivals are held in churches. Congregations gather a bounty of produce. In parallel, Millais paints an earthy pagan version of the yearly ritual, with his leafy altar.

Millais intended the picture not to have a narrative, but “to awaken by its solemnity the deepest religious reflection.” Accordingly, the young girls’ manner and dress are fitting for a church service. The two on the left look solemnly at the viewer, dressed in sumptuous dark green gowns. Both wear their dark, thick hair falling over their shoulders. One holds a basket, used to hold the leaves and add them to the pile. The other smaller two girls gaze reflectively into the leaves. They look less striking, compared to the other two. One is dressed in a russet dress, her hair pulled back, holding a rake. The smallest girl in front wears blue, her hair out and scruffy, and eats an apple.

The falling leaves are a sign of the change of seasons, and the passing of time. As Millais intended, the autumn leaves are prompt to reflection.

In a garden as in a church, all come together. Similarly, the gathering of leaves is a task the girls share. The girls between them imply wealth and poverty, youth and beauty; qualities, like the leaves, that are transient.

Later in his career, Millais began to paint more landscapes devoid of people. He became less concerned with exact details, so typical for the Pre-Raphaelites. Allen Stanley described Millais as “no longer the conscientious slave of what he sees, rejecting nothing, selecting nothing. He now uses the natural world for the sake of other ends.”

Chill October‘s title evokes the weather and mood, infused in the landscape. A pale clouded sky is reflected in the waters of the river Tuy. From the river bank, the water is a shining expanse leading to a hazy blue hill. An island of dark shadowy trees draws the eye, marooned in the center of the water. Golden reeds thickly mass like a carpet along the foreground. They are delicate and feathery, nevertheless forming a strong barrier. Isolating the viewer on the outside, mimicking the dark trees in their loneliness.

Wind rips through buffeting the trees and grasses. Bending, pulling the plants leftwards, towards the open area of water. Subsequently leading to the distant land beyond the lake. The landscape yearns with a need to run away, to escape the chill and gloom. Millais fills the Autumn landscape with anthropomorphic qualities, shared with the viewer. The lack of human life is lonely, and the colors chill.

However, there is a quiet beauty and an uplifting effect in the small detail. The clouds glow with a gentle pearly light. A distant flock of birds soars freely, emphasizing the vast, wildness of the view. The reeds spread a golden glow over the water. In the sadness there is hope.

Vincent van Gogh saw Chill October when he lived in London. An admirer of Millais, Van Gogh was too nervous to introduce himself when they met on the street. He described this landscape as beautiful in a letter to his brother Theo. He was another painter who loved the natural world and painted strong emotions into his work. It is no wonder he could connect to Chill October, which, like Autumn leaves is full of human feeling.

An Art History and Humanities student based in Northern Ireland, a wanderer, and wonder..er.