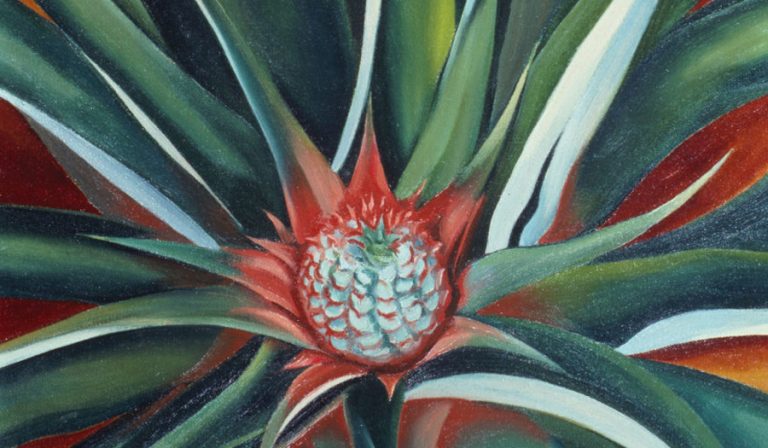 An Art Dialog Between Yayoi Kusama and Georgia O’Keeffe

Georgia O’Keeffe traveled to Hawaii for three months in 1939, leaving on January and returning in April. She was not on vacation, even though she might as well have been. She was commissioned by the Dole Pineapple Company to produce two paintings that would be published in magazines as part of an advertising campaign for the company. These paintings would be used to extoll the virtues of eating Dole pineapples.

O’Keeffe’s husband, the photographer Alfred Stieglitz, “had reservations” about the trip, believing that serious artists do not do commercial work. I may have had the same reservations had I been in his position.

However, Georgia O’Keeffe’s paintings have an honesty and a passion about them that supersede the restrictions and limitations of “commercial work.” She was one of the most famous artists living in America at the time of her trip, and when I see the paintings, photographs, and sketches that O’Keeffe made during her stay in Hawaii, I see an artist who is free to be herself. This is what I learned about Georgia O’Keeffe from the New York Botanical Garden exhibit about her “commissioned vacation.” The exhibit opened on May 19 on a dark and rainy day and ran until October 28, 2018.

The New York Botanical Garden is located in the Bronx. The Bronx Zoo and Fordham University are across the street. The mood is serene and quiet.

One can hear the birds chirping as one takes in the trees and the grass of the landscape. The NYBG website notes that the 17 paintings in this exhibition have not been “seen together in New York since their debut in 1940.” This debut took place in the art gallery of her husband in the year after her return.

I was inspired by Georgia O’Keeffe as I walked through the exhibit then, and was especially moved by her sketches. When I sketch, I often have to fight the temptation to make a work of art. In my view, this is not what a sketchbook is for, even though many sketchbooks have been exhibited in museums through the centuries and many sketchbooks are, in fact, works of art in their own right. I believe that a sketchbook is a place to play, a place to experiment, and a place to doodle one’s thoughts. It is the equivalent of a drawing diary, meant only for the eyes of the artist who owns it. O’Keeffe drew a few lines and she had a mountain. And the lines are completely un-self-conscious if there is such a word. Looking at these sketches made me want to sketch as well.

The 17+ paintings in the exhibit were wonderful, and pure Georgia O’Keeffe. Her paintings are abstract as well as figurative, painted in the artist’s own language. When O’Keeffe paints a large flower that presses against the edges of the canvas, we are drawn into her world, seeing the shapes of these flowers in a new and exciting way. We are being taught to see shapes that we may never have noticed before because of their size; O’Keeffe forces us to look.

And unlike a Monet painting, for example, O’Keeffe’s paintings look exactly the same whether one is standing two feet away from them or from across the room. This adds to the charm of her paintings, whereas with other artists, this constancy of the image may be considered boring. O’Keeffe awakens the artist within me and makes me wonder about how other objects look, how they really look, whether it’s an old pair of shoes, a newspaper, or a paper bag.

The paintings are so powerful that they are able to withstand the following text from the magazine advertisement:

Perhaps you have never seen a pineapple bud – and words cannot describe this glowing crater of color which on the Dole plantations grows and ripens into a luscious big pineapple… Perhaps you have never tasted Dole Pineapple Juice – and there is no other way to discover the fragrant, zestful goodness of this pure juice. Just try it for breakfast… After shopping or exercise – with the children when they come from school… Whenever you or your family crave refreshment.

Any work of art that can be actually noticed and appreciated after reading this text has to be great.