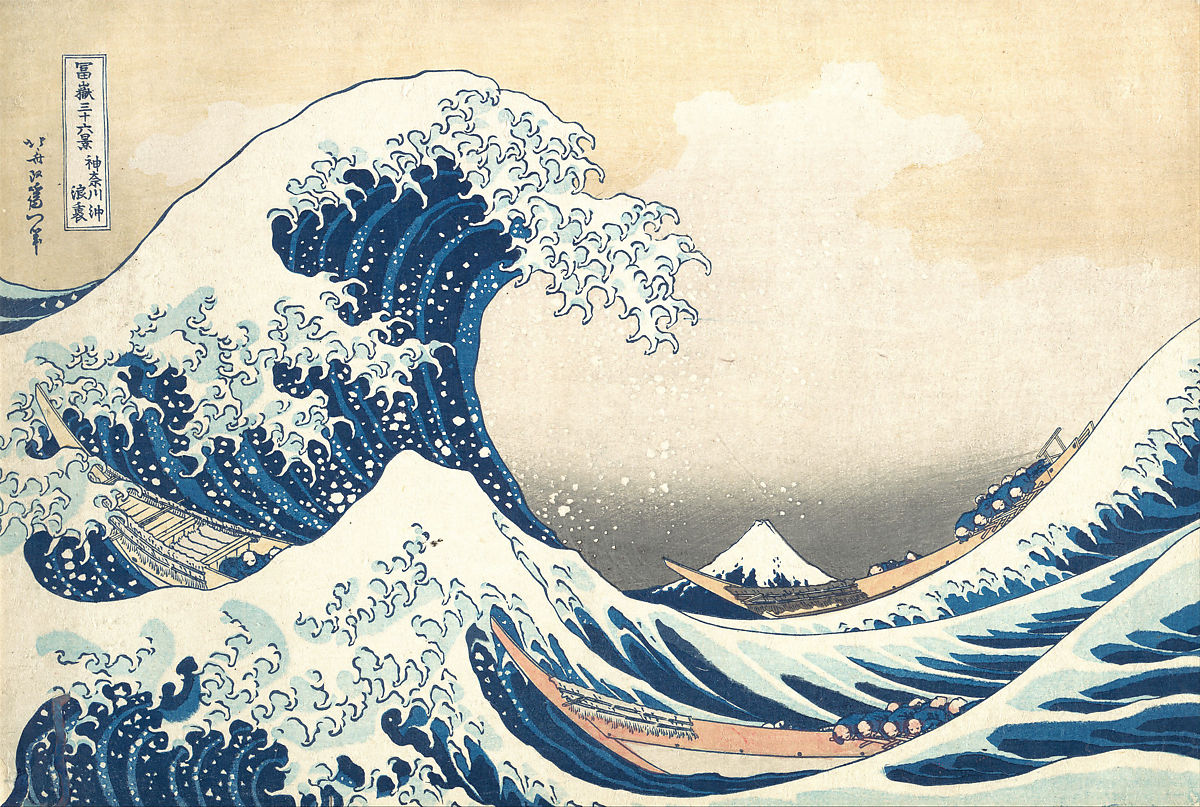 Everyone knows The Great Wave off Kanagawa, the print created by the Japanese Ukiyo-e artist Katsushika Hokusai. But not everyone knows that The Great Wave comes from a series of 46 prints, depicting the views of Mount Fuji from different locations in various seasons and weather conditions. Actually, in the beginning, Hokusai created only 36 prints but the series became so popular that he added another 10. Today we want to show you six of the most interesting (in our opinion of course) prints from the series Views of Mount Fuji.

1. The Great Wave off Kanagawa

In the early 19th century, the pigment known as Berlin or Prussian blue (bero) became more widely available and affordable – it’s thanks to this that the famous print The Great Wave off Kanagawa has such vibrant colors. Here Hokusai proved he was a virtuoso of composition. Not only do the surging breakers seem to swamp the boaters, but to the Japanese eye, accustomed to reading from right to left, the great claw of a wave appears almost to tumble into the viewer’s face.

By the way: Hokusai created this series when he was over 70 years old!

In early autumn when the wind is southerly and the sky is clear, the rising sun can turn Mount Fuji red, as we can see in this Ukiyo-e print. Ukiyo-e, meaning “the floating world”, is a genre of Japanese woodblock prints and paintings, principally produced between the 17th and the 20th centuries and featuring motifs of landscapes, tales from history, the Kabuki theater, and pleasure quarters. Around 1670 the first of the great masters of Ukiyo-e, Hishikawa Moronobu, began to produce prints on a single sheet showing flowers, birds, female forms, and erotic scenes of a type known as Shunga. This type of print was produced in black ink on white paper, and the artist could later add different colors by hand. By the end of the 18th century, the techniques had been developed to allow the printing of multicolored prints known as Nishiki-e.

At the time that Thirty-six Views of Mount Fuji was released, many people worshipped Mount Fuji, and the formation of Fujiko (devotional Fuji confraternities) became popular in the 808 districts in Edo. In Groups of Mountain Climbers, the people climbing and praying to Mount Fuji are depicted.

Hokusai’s high artistic quality made a great impact on European impressionist painters. Many artists collected his woodcuts: Edgar Degas, Paul Gauguin, Gustav Klimt, Franz Marc, August Macke, Edouard Manet, and Vincent van Gogh included. Also, in the field of music, Claude Debussy, a French composer, drew inspiration from The Great Wave off Kanagawa, and the first edition of La Mer (published in 1905) had a picture of a wave on its cover.

Hodogaya was the fourth post-station on the Tokaido Highway. The wanderer on the far right wears the clothes of a monk (komuso) and his face is tilted upwards. The other travelers and the horse seem to be fatigued; the palanquin bearers are resting to wipe a brow and re-tie a sandal. The only person admiring the view of Fuji is the man leading the horse, pointing his herding stick towards the mountain.

6. Fuji from Gotenyama at Shinagawa on the Tōkaidō

This view of Mount Fuji is made from across Sagami Bay, between the trunks of cherry trees that dot the hills at Goten-yama above Shinagawa, the first post-station on the Tokaido Highway leading south out of Edo. Here samurai and ordinary townspeople alike picnic together under the cherry trees and rest at temporary tea stalls. Only a few pay attention to this extraordinary view.

Are you a fan of Japanese woodcuts? Here’s some more:

If you find any joy and inspiration in our stories, PLEASE SUPPORT
DailyArt Magazine with modest donation. We love art history and we want to keep going with writing about it.
$5 $10 $25 $50 $100 MONTHLY
Related Topics:featured, Japan, Katsushika Hokusai, prints, ukiyo-e, woodcuts