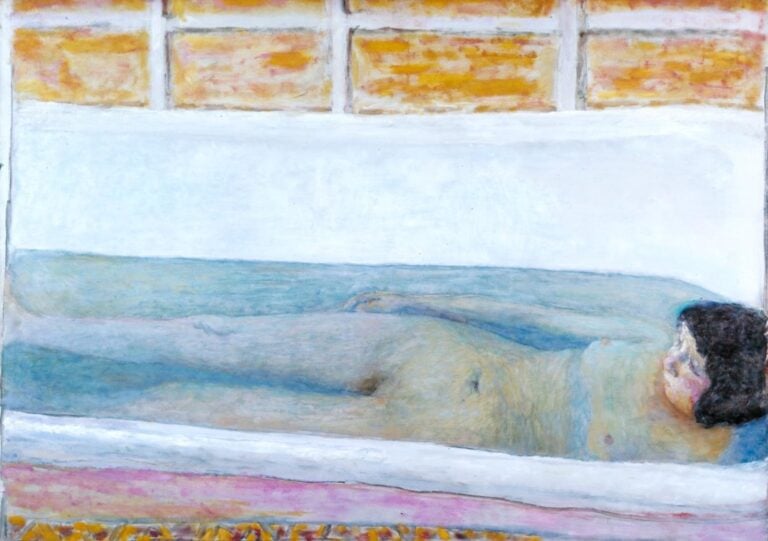 When I was writing the article about the Nabis, I came across the past Tate exhibition on Pierre Bonnard which closed in May 2019. Let’s reminiscence a bit longer on the colors and hues of his paintings and let’s talk a little about his life, which was not as serene as it may seem.

Bonnard worked on several paintings at the same time, he tacked entire rolls of canvas to all walls of his studio and would paint directly on them and when a painting was finished, he would just cut the piece completed. His style of painting was criticised by Picasso who expressed frustration at Pierre’s need to work over again the same painting, by saying: “Painting … is a matter of seizing the power.”

They met when she was 24 and he was 26. She claimed to be much younger though and didn’t want to reveal her real name because Marthe de Méligny was her work-pseudonym. She told Pierre she was really called Maria Boursin when they married in 1925, 32 years after they met (living together as an unmarried couple was pretty controversial for their time).

They remained together for fifty years and Marthe became a central figure of Pierre’s work, captured during her daily activities like bathing or dressing (Marthe suffered from a tubercular condition and needed to bathe daily). The dreamy scenes construct an almost idyllic image of their life together although the reality was less dreamy: Pierre had many affairs with younger women (maybe when Marthe was away on many of her spa sojourns?). One of his lovers, Renée Monchaty, committed suicide when Bonnard married de Méligny in August 1925 (having proposed to Monchaty in 1923 to later break the engagement).

Bonnard used photography as a tool to move away from conventional modeling and composition: many snapshots from daily life can be traced later in his paintings. If we take into consideration that he hardly ever painted from life, photos served as a great aid to capture the moment of inspiration.

Bonnard bought his first car in 1911, which let him and Marthe explore the countryside around Paris. He regularly visited his mother at Le Grand-Lemps in the Dauphiné, south-east France, and Claude Monet at Giverny. With time, Bonnard and Marthe spent summers at their house in Normandy and then part of every winter in the south. They would stop at Arcachon on the Atlantic coast or Deauville.

From 1927 onward Pierre would spend even more time in the south, which we can see in his work (he would just roll up his canvases and take them with him on a journey). Warm light and intensity of orange, red and yellow suggest the bliss he was experiencing when looking at the southern landscapes. However, once when critics titled him as a “painter of happiness,” Bonnard noted, “he who sings is not always happy.”