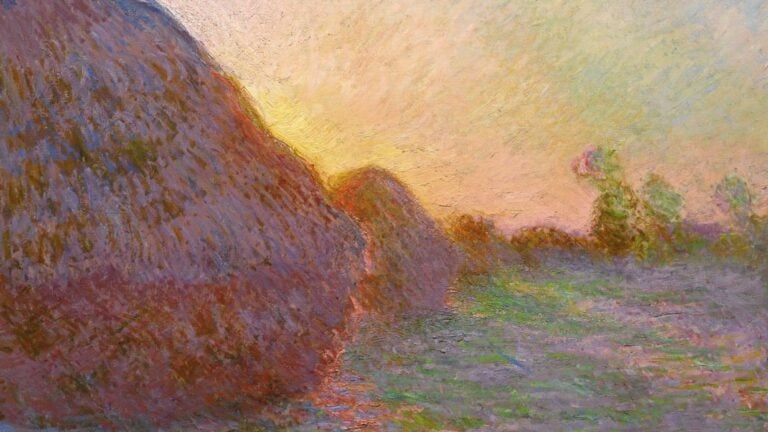 Claude Monet, the master of Impressionism, loved to paint in series. The one with haystacks (in French called meules) is his most well-known, and was also the first one he exhibited.

15 of these paintings—presenting the haystacks in different times of the day, as well in different seasons—were exhibited at the Galerie Durand-Ruel (owned by the famous Impressionist art dealer) in 1891. In total, Monet painted 25 paintings with this subject. Today, for the Masterpiece Story, I would like to show you my favorite Haystacks painting. It is held in private hands (as are 7 others from the series) and in 2019 it was sold at Sotheby’s for $110.7 million, which also set a new artist record.

Monet had previously painted subjects in different moods and lighting. However, as he matured as a painter, his depictions of atmospheric influences were increasingly concerned not only with specific effects but with the overall color harmonies that allowed him an autonomous use of rich color. You must admit that in this particular Haystacks the color harmony is amazing.

But back to the history of the painting. The year 1890 was a very important moment in Monet’s life; he turned 50 and bought a property for the first time. It was of course his famous house with the garden in Giverny. Meules were inspired by the fields adjacent to his new home.

Back in those days, not every village in the French countryside possessed its own thresher, and the wait for one of the traveling machines often took months—grain cut in the summer might sit in its neat and careful stack until January or February of the following year. These stacks were over ten feet (ca. 3 meters) in height, sometimes reaching over 20 feet (ca. 6 meters), their shape varying by region. The yellow monoliths in Monet’s canvases are the typical shape of the grain stacks in the Normandy countryside, a cylindrical base topped with a peaked dome, which lay all around him in the fields of Giverny.

Look at the unique perspective and dynamic composition of the Meules. Strong diagonal lines (one from the rightward-facing perspective, the other from slanted beams of sunlight) meet at the center of the work, grounding the layers of elaborate brushstrokes and guiding the viewer’s gaze across the canvas. Captivating!