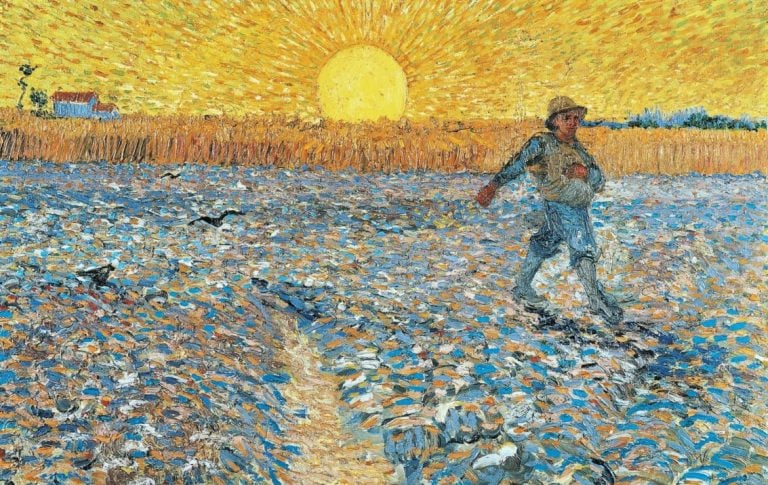 Vincent van Gogh is famous today for two reasons. Firstly, his unstoppable creativity. He produced 2,100 artworks in just over a decade. And, secondly, his struggles with his mental health. The famous ear incident was the catalyst for him admitting himself into the Saint-Remy Asylum, where he stayed for a year. While there, Van Gogh occupied his time by copying the works of his favorite artists; among them Eugene Delacroix and Francois Millet. Van Gogh made also other copies during the time he spent in Arles and Paris.

The Good Samaritan after Eugène Delacroix

Originally by Eugène Delacroix (1832–1883), Van Gogh made his copy of The Good Samaritan in May 1890. The painting is mirrored, meaning that right is left and left is right, this is probably because it was copied from a print. Van Gogh freshens up the Romantic painting with his characteristic brushwork making small and energetic strokes.

The colors chosen also differ from the original, instead of the warm browns and reds of Delacroix, the Dutch artist uses more somber ochres and blues. The inspiration for this painting comes from the Bible. The passage describes an injured man lying at the side of a road. Two men pass him by but do not stop to help. Another man approaches, and this time stops to help him, a man from Samaria, hence the “Good Samaritan.” Van Gogh also made a copy of Delacroix’s Pieta.

Here, a group of prisoners are walking in circles in the courtyard, getting some exercise. On the right hand side the guards are keeping an eye on them. Most of the inmates seem preoccupied in their own musings – except for one – the artist himself, who raises his head and looks directly at the viewer. His red hair, adds a splash of color, to the otherwise cold tones of the painting.

Van Gogh made this copy after studying an engraving by Gustave Doré (1832–1883). It is of Newgate Prison in February 1890. The blues and greens of the painting convey the depressive mood of the prisoners. And the high prison walls, which completely hide the horizon, make for an especially claustrophobic piece of art.

Van Gogh particularly admired the work of Realist painter Jean-François Millet (1814–1875), and copied several of his paintings. He felt that the French artist was a kindred spirit as he too wanted to depict the true life of peasants. In Noon Rest from Work, Van Gogh transforms Millet’s pastel artwork. By using his trademark brushwork and contrasting the blue-violet tones of the peasants clothes against the yellow orange of the hay, he provides a new perspective to the work.

The Sower after Jean-François Millet

Another painting by Millet. Van Gogh was almost obsessed with this work and made several copies. At first, he made exact copies. But while in Arles in June 1888, he decided to insert the figure of the sower into one of his own creations. This version is purely Van Gogh. He moves away from the grays and browns of the original work and instead uses vibrant yellows and violets. The sun, the everlasting source of life, takes center stage on the canvas.

At the back of the canvas we can see fully grown crops, a reference to the cycle of life. A few months later, in November 1888, Van Gogh painted another sower, but this time he didn’t make a copy of Millet’s work but instead used it as inspiration.

The Raising of Lazarus after Rembrandt van Rijn

Another artist that made it into Van Gogh’s all-time pantheon of artists was Rembrandt van Rijn (1606-1669). In May 1890, while at Saint-Remy, he made a copy after the Dutch master’s The Raising of Lazarus. This is not an exact replica of the original work. Interestingly, Van Gogh decides to leave out the central figure of Jesus in his version.

The main theme of this work is human suffering, with the focus on Lazarus and his sisters. Lazarus here is portrayed with a red beard, perhaps, making a reference to Van Gogh’s own suffering. The models for the two women were Madame Roulin and Madame Ginoux, acquaintances from his time in Arles. Van Gogh also changed the setting of the painting, placing one of his wheat fields in the background.

‘’All my work is based to some extent on Japanese art’’ wrote Vincent to his brother Theo on the 15th of July 1888. The artist discovered Japanese prints during his time in Paris and the impact on his work was tremendous. He admired the minimalistic compositions, the bright colors, the lack of linear perspective and the new and unusual points of view. Of all the artworks Van Gogh copied, it was his study of Japanese prints that influenced him the most. He integrated all of the elements mentioned above and blended them with Western ideas of art to create his own unique style.

Van Gogh copied several prints like the Evening Shower at Atake and the Great Bridge or the Plum Park in Kameido by Hiroshige, often combining elements from different prints in order to make them appear more exotic.

In examining the works that Van Gogh chose to copy, we can see a true artist at work. His versions of the works retain his artistic voice and are not overwhelmed by the originals. Notably, the works he copied whilst in Paris or Arles, like The Sower, are of a more optimistic nature. Whilst those produced in Saint-Remy predominantly focus on the theme of human suffering, underlining his depressive mood and mental struggles during his stay at the hospital.