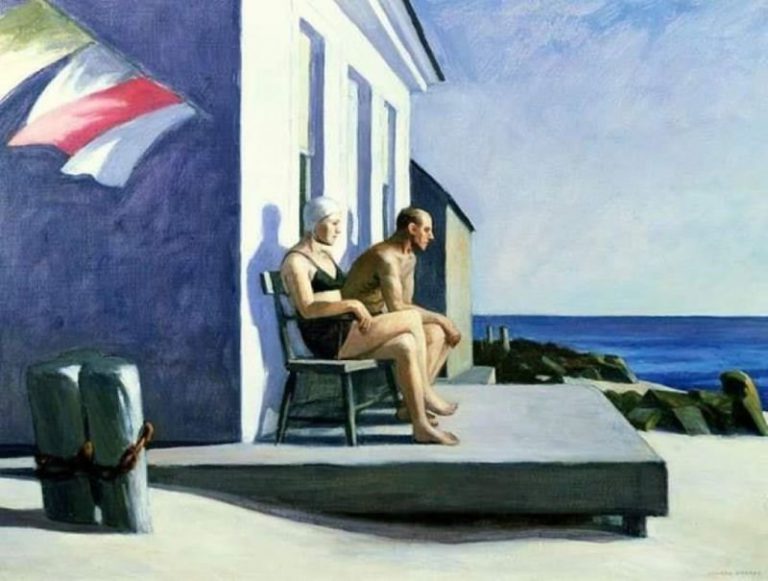 The time has come for young children to trade in play clothes for school clothes, tugging parents along in the quest for a routine. Meanwhile, all adults once again find themselves grasping for a new, safe normal in the face of another surge of a pesky virus. No painter captures that feeling better than Edward Hopper in our masterpiece story, Sea Watchers.

Native to New York with a Dutch, English, French, and Welsh heritage, Edward Hopper had a longstanding interest in art. His talents were encouraged by his family but not without a bit of foresight; Hopper’s folks allowed him to study art with the pretext he goes into illustration, ensuring he had means to support himself. While he came to detest that work, he eventually found success as a printmaker, specializing in etching. Later, he gained recognition as a painter and became known for his paintings of peaceful, yet eerie urban life. One of the most famous examples is Nighthawks.

Tall and lanky Mr. Hopper was known as that guy who rarely talks. So, when he does, you’d best listen to catch a nugget of wisdom. Looking at his works nowadays, you get a sense of that in his ability to capture isolation at a time when people felt much less isolated than we do – and perhaps are – now.

When I first came across Sea Watchers, I was intrigued. I wanted to know why these two people appeared so unhappy despite their beautiful surroundings. The best I can do is make a couple of educated guesses. Here’s the first: Hopper married late. Both he and his wife, fellow artist Josephine Verstille Nivison, were in their 40s when they married. Each of them had become a bit settled in their ways and struggled to find a rhythm together. Perhaps, this painting reflects that tension or the alienation we can feel even in the company of those we hold closest.

As citizens of a pandemic-weary world, Hopper’s knack for capturing isolation becomes relatable in an entirely different way. For many, the summer again brought us out of isolation and gave us a teaser of the lives we once knew. As reports of rising case numbers come in and new viral mutations emerge, we once again find ourselves wondering when and if we’ll ever be able to live as freely as we once did. Meanwhile, many continue to struggle and contemplate the realities of their situations, whether it happens as you wistfully stare at the horizon, like Hopper’s couple, or into the quiet streets outside your window.